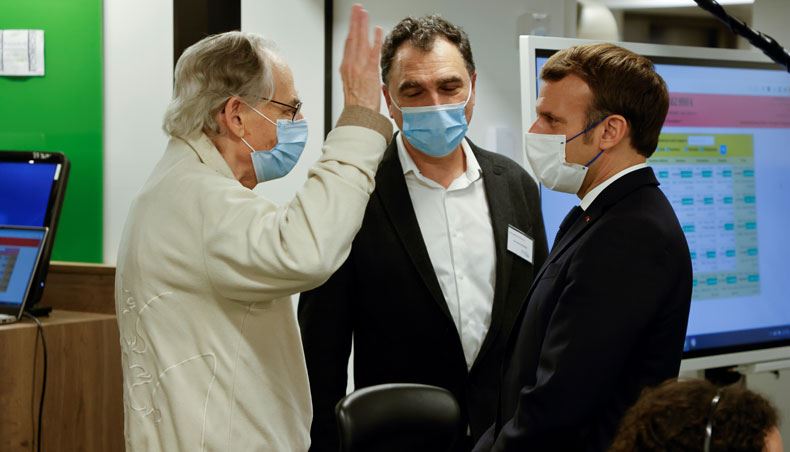 French president Emmanuel Macron listens to a resident of the regional capital of Stepanakert in Nagorno-Karabakh who came to France for the fundraising, as he visits the 2020 Phoneton, an annual fundraising operation organised by the Hayastan All-Armenian Fund’s French affiliate for the development of Armenia and Artsakh, on November 21, 2020 in Paris. — AFP photo

An Armenian fighter in camouflage with a Kalashnikov assault rifle slung over his shoulder peers through binoculars over towards an encampment of Azerbaijan troops.

The rugged valley in Azerbaijan’s Nagorno-Karabakh region delineates the new and ambiguous border that separates the Armenian fighters and Azerbaijan forces after a recent peace deal ended weeks of fierce clashes. But wedged in the no man’s land between the soldiers is the pomegranate farm planted a decade ago by Vardges Harutyunyan, who is nervous he will not be able to harvest the fruit this year.

‘Now Azerbaijani soldiers are standing there,’ Harutyunyan, 64, tells AFP, looking toward the rows of carefully tended trees in the distance.

Clashes erupted in late September between separatists backed by Armenia who had held the territory for some 30 years and Azerbaijan’s army determined to wrest the mountainous region back under its control.

Several thousand were killed and many more displaced in the six weeks of fighting that was brought to a halt by a Russia-brokered peace agreement that saw the Armenians cede swathes of territory captured by Azerbaijan.

The new geography of Nagorno-Karabakh and several surrounding districts that were held by the separatists is now being overseen by a force of some 2,000 Russian peacekeepers, many of whom previously served in Syria.

But until they arrive to mark out land in the valley near the town of Askeran, Harutyunyan and the future of his fruit trees hangs in limbo.

Standing around the smouldering remains of a fire burning in rugged terrain, the former deputy head of the district’s police conceded that the end of the war had ushered in new uncertainty.

‘We gave away half of the country,’ Harutyunyan said.

In the hopes of finding clarity over access to his plot of land, Harutyunyan appeals to Arvid Gulyan, deputy head of agriculture in the district whose offices are in Askeran.

In Gulyan’s office, Harutyunyan traces a finger over a map of the region on the wall to locate his farm.

The local official is sympathetic but unable to offer a solution.

‘He wanted to know if the garden is on our side or on the side of the Azerbaijani side. But it’s not clear,’ he said.

‘The borders haven’t been established yet.’

The poor town nestled between steep slopes is decorated with Christian crosses, war memorials and flags of the province that declared autonomy in the 1990s but was never recognised internationally.

The separatists announced self rule in a post-Soviet war that claimed 30,000 lives and saw Azerbaijani residents flee the region en masse.

With the realities of the deal still filtering through, the question of borders and many other things remains unclear.

Armenian prime minister Nikol Pashinyan’s decision to agree to cede disputed territory has sparked a political crisis with his career hanging in the balance.

French president Emmanuel Macron this week also raised questions over ‘ambiguities’ in the agreement pointing in particular to questions over refugees and Turkey’s role in the truce.

In Askeran, Gulyan said there had recently been unexplained power cuts and erratic gas supplies.

‘We don’t know what will happen next.’