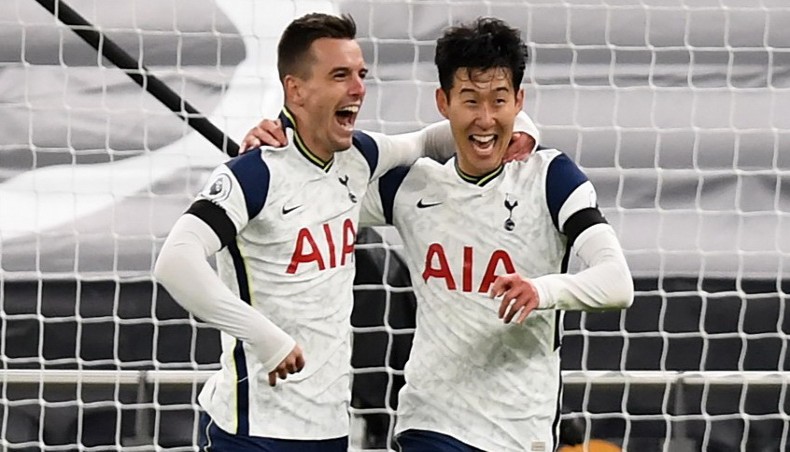 Tottenham powered to the top of the Premier League with an impressive 2-0 win against Manchester City, while Chelsea are up to second place after their victory at Newcastle on Saturday.

Manchester United remain well off the pace in ninth, but did manage a first home win in the Premier League for seven games as Bruno Fernandes's twice-taken penalty saw off lowly West Brom 1-0.

Spurs end the day on top of the table for the first time in six years as goals from Son Heung-min and Giovani Lo Celso saw off a toothless City at the Tottenham Hotspur stadium.

Tottenham took the lead after five minutes as Son ran onto Tanguy Ndombele's lofted pass, beat the City offside trap and slotted a cool finish under Ederson for already his 11th goal of the season.

City dominated possession but struggled to create chances and were cut open again for Spurs' second with just their second shot on target.

Lo Celso came off the bench to score just 35 seconds after his introduction as he raced onto Harry Kane's sublime pass to slot past Ederson.

On the one-year anniversary of Jose Mourinho's appointment, Tottenham are unbeaten in their last eight league games since losing to Everton on the opening weekend, sparking hopes of a genuine title challenge.

‘The players gave everything and followed a strategy. They were amazing,’ Mourinho said.

‘We found a way to play and it was magnificent to see them play how they did.’

Tottenham, who last won the top-flight title in 1961, lead Chelsea by two points with the two set to face each other next weekend.

City are languishing in 11th place, eight points behind the leaders, albeit with a game in hand.

Pep Guardiola extended his contract at the Etihad to 2023 this week, but his side look a shadow of the swaggering outfit that won successive league titles in 2018 and 2019.

Twelve points from eight games is City's lowest total at this stage of a Premier League campaign since 2008-09.

‘We had more chances than them but we lost. Mourinho's teams are like this, you make a mistake and they punish you on the counter attack,’ Guardiola said.

Frank Lampard's side are unbeaten in nine games in all competitions and have not lost in their last six league matches.

With five clean sheets in their last six outings in all competitions, Chelsea's third successive league victory was the perfect way to start a hectic period leading up to Christmas.

The visitors' pressure was rewarded in the 10th minute when Mason Mount whipped in a low cross and Fernandez turned it into his own net under pressure from Ben Chilwell.

Chelsea put the result beyond doubt in the 65th minute when Timo Werner accelerated away from the Newcastle defence and slipped a pass to Abraham, who guided his shot in off the post.

‘I won't get excited about being top of the table for five minutes,’ said Lampard. ‘It's important to be humble and know it's a long race.’

United still have a long way to go to claw themselves back into title contention as they again flattered to deceive at Old Trafford despite picking up a long-awaited win.

However, on review, referee David Coote overturned his original decision.

Moments later, the Red Devils got a penalty for Darnell Furlong's handball.

Fernandes's first effort was saved, but he got a second chance as Sam Johnstone had jumped off his line prior to the Portuguese international's kick.

Fernandes slammed home the reprieve, but was still not happy at missing from the spot for the third time this season.

‘Ok, I scored the second one but I need to score the first one,’ he said. ‘Three points is the most important thing but we know we can do much better and we will do for sure.’

Earlier, Aston Villa missed the chance to go top for a few hours as Brighton ended a run of seven games without a win with a 2-1 victory at Villa Park.