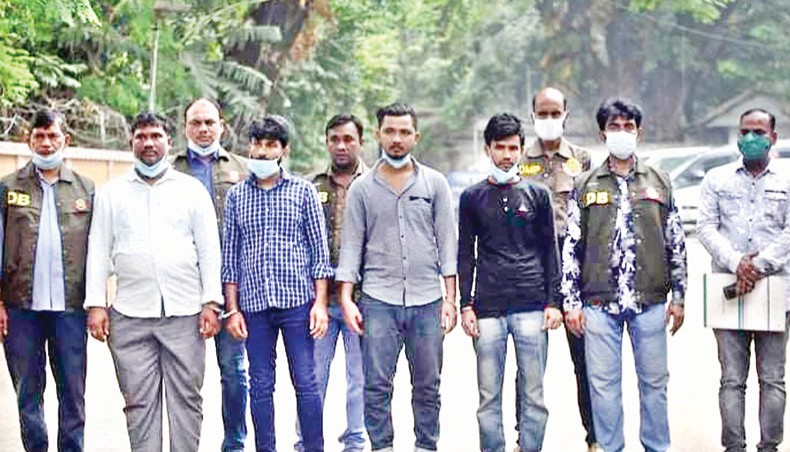 Detective Branch of police places four suspected forgers, who were arrested on charge of producing and trading counterfeit post stamps, court fees and other official papers, before the media at DB head office in Dhaka on Saturday. — Focus Bangla photo

Detectives on Saturday said that they arrested four people for counterfeiting revenue and postage stamps and seized forged stamps worth Tk 18 crore from them.

They are part of a racket that was manufacturing counterfeit revenue stamps and postage stamps and circulating those in Dhaka and other districts, said AKM Hafiz Akter, additional commissioner of the Detective Branch of the Dhaka Metropolitan Police, at a press briefing at the DMP media centre.

A team of the Ramna Detective Branch arrested the suspects in separate drives at Ashulia and Paltan and seized forged stamps worth Tk 18 crore on Friday, he said.

Hafiz said that the gang had been producing various types of counterfeit stamps, court fees and other official documents for long and circulating those on the local markets, depriving the government of revenue.

He said that it costs around Tk 15 to produce a page of fake stamps and the ring used to sell it at Tk 25-Tk 30 on markets.

A case was lodged with the Paltan police station under the Special Powers Act in this connection, he said.