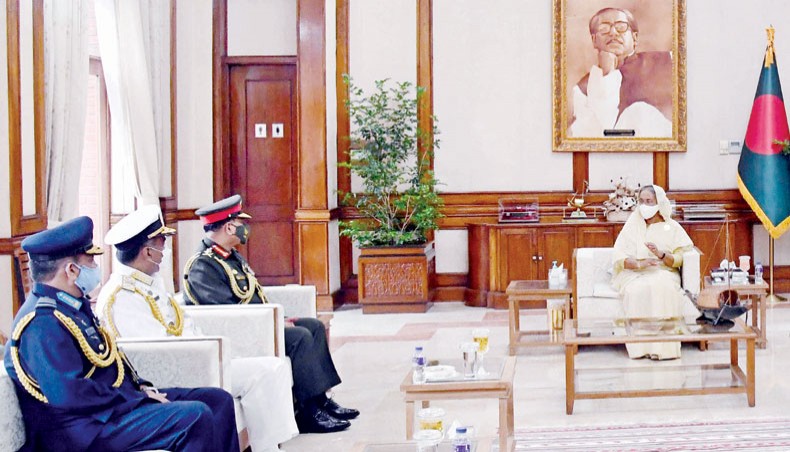 The chiefs of three services paid a courtesy call on prime minister Sheikh Hasina at Gono Bhaban in Dhaka on Saturday on the occasion of Armed Forces Day 2020. — Focus Bangla photo

Prime minister Sheikh Hasina on Saturday expected the armed forces to earn enhanced professional expertise to contribute more to nation building campaign being imbued with patriotic spirit as it emerged through the process of War of Independence in 1971.

‘The armed forces that emerged on a smaller scale in the process of the liberation war today became a gigantic institution,’ she said in a nationwide televised address on the occasion of Armed Forces Day 2020.

She added: ‘I pray to most merciful Allah — let the members of the armed forces contribute more to the country’s defence being empowered with professional efficiency.’

The armed forces this year celebrate the day discarding the traditional festivity in view of the COVID-19 outbreak, prompting Sheikh Hasina, who holds the charge of the portfolio of defence ministry, to deliver her address online.

In her nearly 13-minute speech, Sheikh Hasina listed elaborately the armed forces role in different difficult situations in the country and troubled regions abroad as a major stakeholder of UN blue helmet missions over the years and its current response in combating the COVID-19 crisis.

The premier reviewed the gradual development and modernisation and development of army, navy and air force till date since 1971, particularly recalling the formulation of national Defence Policy by Bangladesh’s founder Sheikh Mujibur Rahman.

‘We enriched all branches of the armed forces with modern military hardware and equipment in the past one decade,’ she said.

Sheikh Hasina added: ‘I firmly want to point out that the quantum of modernisation the armed forces witnessed during the tenure of our government, never happened in any period in the past.’

The premier said her government framed the ‘Forces Goal-2030’ keeping consistency with the Defence Policy 1974 and in line with the goal the armed forces were organisationally restructured, imparted improved training and equipped with specialised defence hardware.

She said that during the Awami League rule, two infantry divisions, two infantry brigades, one composite brigade, a special works organisation and 10 battalions were formed.

Expressing her firm optimism, she said that it would be possible to build a ‘Sonar Bangla’ envisioned by Sheikh Mujibur Rahman, keeping the wheel of the country’s economy running by maintaining the health rules amid the ongoing coronavirus pandemic.

‘We’ve to take our economic activities forward by following the health guidelines … we’ll build a non-communal ‘Sonar Bangla free from hunger, poverty and illiteracy InshaAllah to materialise the dream of the Father of the Nation.’

Sheikh Hasina noted that every year November 21 is being observed as ‘Armed Forces Day’ to celebrate the victory in the War of Independence of the Bengali nation.

‘When in 1971 the fearless armed forces launched a joint offensive movement against the Pakistani occupation forces, the enemy forces were forced to surrender and then the final victory came on December 16.’

Sheikh Hasina said the nation always remembers with profound respect the great sacrifices and heroism of the Armed Forces members in the war.

‘Soon after independence, the Father of the Nation realised the need for well-developed and professional armed forces. Subsequently the armed forces, which came into being on a small scale through the Great War of Independence, have now become a big institution,’ she observed.

The prime minister said that Sheikh Mujib, in the war-torn country, established Bangladesh Military Academy, Combined Arms School and a separate training centre for each corps of the army in 1972 with his government’s limited resources.

She said that Sheikh Mujib simultaneously inaugurated three bases of Bangladesh Navy in Dhaka, Chittagong and Khulna, while procured warships for the force from India and Yugoslavia.

In 1973, he added sophisticated equipment to the air force, including supersonic MiG-21 fighter jets, helicopters and transport aircraft and air defence radar, she said.

Referring to the golden jubilee of the country’s independence, Sheikh Hasina said the professionalism and efficiency of the Bangladesh Armed Forces, which now stood on the solid foundation based on the National Defence Policy crafted by the Father of the Nation, have spread across the globe.

The prime minister mentioned the armed forces members’ very strong role in tackling ongoing COVID-19 and said they are performing their duties with utmost devotion and self-sacrifice during any crisis of the country.

The armed force members, she said, as front-line fighters were combating the coronavirus situation and conducting awareness campaign as well as implemented ‘lock-down operations’ and helped ensuring quarantine for the infected people and supervision of the returnees from abroad.

Sheikh Hasina said that the various activities of the Bangladesh Army to help the needy and helpless people during the coronavirus period have also got widespread appreciation beyond the territory too.

Highlighting the activities of the Bangladesh Navy to deal with the coronavirus situation, she said they are working to maintain social distancing, ensure compulsory home quarantine and provide humanitarian assistance to the vulnerable families.

To fight the coronavirus situation in the Maldives, the premier said, medical supplies provided by the Bangladesh government were sent there by the naval ships, while the UN-deployed Bangladesh Navy ship ‘Bijoy’ distributed food and relief items to Bangladeshi families living in Beirut, Lebanon.

About the role of Bangladesh Air Force in providing humanitarian assistance, the prime minister said air force helicopters shifted a significant number of Corona victims including public representatives, doctors, teachers and eminent personalities, to Dhaka from country’s remote areas for their better treatment.

‘A significant number of armed forces members died of the COVID-19 and were infected with the fatal disease while providing humanitarian support to the corona victims,’ she said, expressing her profound sympathy to the bereaved families and wished speedy recovery of the corona victims.