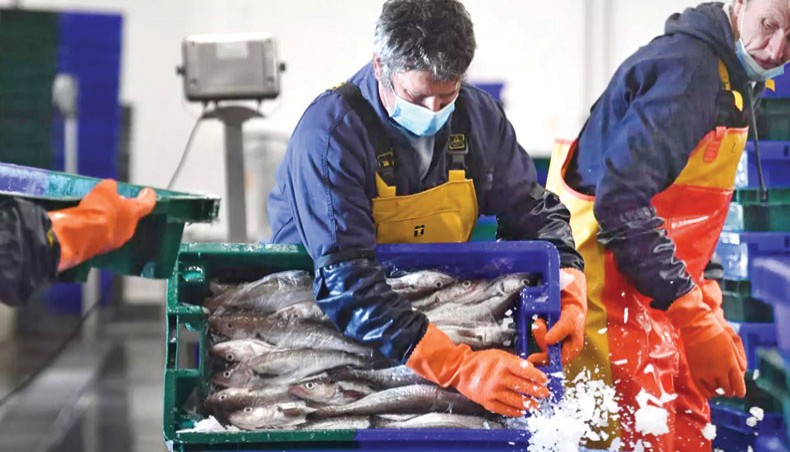 A photo shows lobster, turbot, and monkfish pouring out of the nets on to the quayside in northwestern France, a good part of it from British territorial waters. — AFP photo

French fishermen who depend on bountiful UK waters fear for their livelihoods in the post-Brexit endgame, but so might their British counterparts who land their catch at the Brittany port of Roscoff for the European market.

Lobster, turbot, and monkfish are stacked up on the quayside in north-western France, a good part of it from British territorial waters.

‘We are really in a period of certainty, we don’t know what will become of us,’ said Erwan Dussaud from Beganton fisheries that operates five trawlers catching crab and lobster in English waters.

The UK officially quit the EU last January 31, but an 11-month transition period to allow for agreement on a new relationship ends on December 31.

Both sides are still at loggerheads and need a trade deal to govern ties, or risk economic chaos. Fishing has been one of the most politically explosive issues blocking agreement.

If access is restricted for French vessels, ‘it will be over for us in two or three years’, said Jean-Philippe Guillerm, skipper of a 15-metre trawler that makes 40 per cent of his turnover in British seas.

It’s the same for Franck Brossier and his three bigger boats among the 40-odd that work from Roscoff.

‘We are going to lose a historic fishing zone,’ he said, predicting major problems to find another elsewhere.

‘We will find ourselves with more boats in a restricted area which in the very short term will lead to over-fishing.

He said that in such a situation, ‘problems’ could be expected from Spanish, Dutch or Irish vessels scouring the same seas.

‘It’s going to get very complicated,’ said Brossier, a serious fan of Liverpool FC who has named his boats ‘Liverpool’, ‘Anfield Road’ and ‘Ian Rush’ after the club, ground and legendary goal-scorer.

But Brossier insisted that if negotiations fail and the French are locked out of British waters, there will be consequences for UK fishermen too.

‘It’s definite, we will not let the English land their catch in France,’ he warned.

‘The (French) fishermen will come together very quickly.’

Just across the port, Briton Ben Laity, skipper of Ocean Pride, was also landing his catch on another quay.

‘We do very well over here so it’s a bit of worry,’ he admitted, adding: ‘I’d rather land my fish over here as we always have done.’

Laity said that he had landed part of his catch at Newlyn in Cornwall, southwest England, earlier in the week.

But the price was not what he wanted and so he went over to France where he felt assured of a ‘very good’ price.

Dussaud explained that French trawlers do not catch enough fish for the domestic market.

‘So we will have to buy English fish,’ he said, predicting a last-minute deal between London and Brussels.

Laity agreed, but wanted a better deal for his compatriots.

‘I do think that the English should get a lot more than what they are given at the minute, which is not a lot to be fair,’ he said.

With neither London nor Brussels yet ready to compromise, EU diplomats say they see no swift end in sight in the post-Brexit negotiations.