Trajectory of Salil Chowdhury’s protest songs: the making of an artivist icon 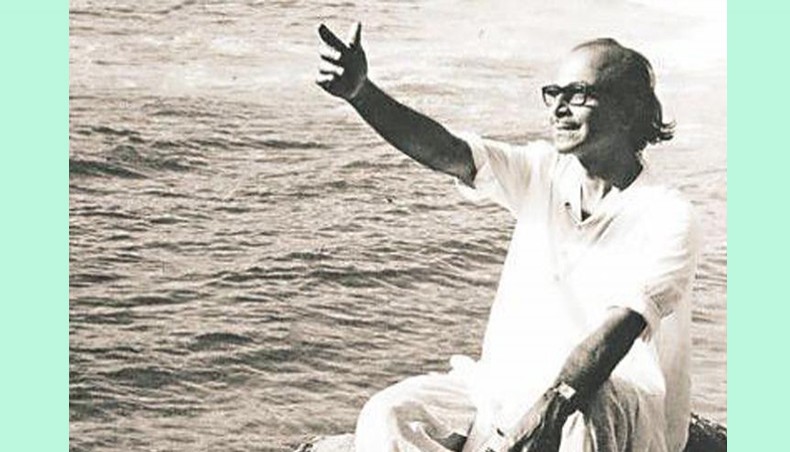 Good music is the authentic expression of something — a person, an idea, a feeling, a shared experience, a Zeitgeist.

CREATIVE art work is an expression of the author’s consciousness regarding contemporary world derived from inner passionate narratives and highly influenced by the idiosyncratic perceptions of human mind. Salil Chowdhury (November 19, 1925 - September 5, 1995), a legendary musician explored his creative faculty throughout his life.

Mass movements such as the Indian People’s Theatre Association and the New Song Movement in Chile, Cuba proved that music and musician can lead a political uprising and can shape the political actions of the mass. Violetta Parra, John Lenon, Victor Jara, Bob Dylan, Joan Baez, Pete Seeger, Hemanga Biswas, Salil Chowdhury all these names attained immortality through their artivism, a term coined by critic and contemporary art theorist Rosalind Krauss. Unfortunately, IPTA movement could not maintain its credibility for long. On November 2, 2019, the National Public Radio, America reported that the song ‘El Derecho De Vivir En Paz’ (The right to live in peace) gave voice to the protesters in Chile. The song was written by great Chilean artivist Víctor Jara as a tribute to Ho Chi Minh. The song that was composed in 1971 became the voice of protesters again in 2019.

Nobel laureate Bob Dylan and another great music icon Joan Baez are still international icons to inspire young minds to fight against oppression. Just a few days back, students of Dhaka University demonstrated the song ‘Un violador en tu camino’ (The rapist is you) which is a contemporary Chilean protest anthem for feminist movement against rape. Debojyoti Mishra, an eminent music composer from Kolkata led several anti NRC, CAA musical rally in January 2020. Protest songs have an interactive relation with the mass and successfully connect the mass at any space.

The dialectical relationship between culture and politics is rarely celebrated as a genuine combination, particularly in Bangladesh and India. But, Salil Chowdhury brilliantly blended the essence of entertainment and political spirit in his works. Salil named his rebel songs as the ‘Songs of consciousness and awakening’. Salil’s musical career has two phases, the IPTA phase and the Mumbai phase. In the first phase of the early 1940s, he was a political activist, people’s artist. But in the second phase, he became a brilliant entertainer, quite professional, an artist of the industry.

The song titled ‘Ei roko, prithibi-r gari-ta thamao’ invites us to examine its intertextuality. The lyric of the song, recorded in 1978 and sung by Salil himself, denotes insightful assertion of a passenger who mistakenly boards on the moving wheels of this universe. Rendering a rhythmic tune of westernised Jazz, the composer-singer simply renounces the hazardous past with self-grown articulations.

Salil grew up in a tea garden in Assam because his father worked there for long time as a doctor. His father was a music enthusiast. Young Salil grew up with such a perfect orientation to extraordinary music from entire world. Salil’s artistic grooming got further perfection under the supervision of his elder cousin Nikhil Chowdhury and his professional orchestra team named Milon Parishad in Calcutta.

His political ideas and musical thinking both got certain level of maturity during student life in Bangabaashi College in Calcutta. Socio-political condition of home and abroad including the Second World War, the Bengal famine and the political chaos of the 40s awaken him to response with social responsibility. He was an active member of the peasant movement. In the meantime, he met with the IPTA members in a conference and become a member of the organisation in 1945 and the communist party onward. In this writing, I will talk about his protest songs. Around 68 lyrics are documented in the Salil Collection of works published by Dey’s publication. Around 50 songs’ recorded version is available in the Salilda.com which is designed and developed by one of his great fan Gautam Chodhury.

‘Uru taka taka taghina taghina’ is one of the earliest compositions for the IPTA during 1944/45. It is a rural folk song which explains the joy of sowing and harvesting by peasants. He transposed folk motif to modern music style. ‘Aalor desh thekey aandhaar paar hoyee’ was also written and composed for the IPTA during 1945/46. In this song, Salil did experiment with vocal-harmony and singing in multi layers. Salil blend musical metaphor with poetic texts in the songs, like, ‘Surrjer shoraghate e kuyasha chire dao’, ‘Besurer dabanole osurer jani hobe shesh’. He always believed in the power of music. He mentioned it in several songs, like in ‘Amra gan gai, kenona amra gan gai’.

‘Gowrisringa tulechhe shir’ is one of the most celebrated mass songs. Probably it was composed in 1946 as a response to the Second World War. Then came ‘Dheu uthchhey karaa tutchhey’ — a historic song composed on July 29, 1946 to support the Naval Mutiny. The soldiers called for a major strike against the British government which drew enormous response from the mass people. Salil show extraordinary musical skill in the song. The chord progression, orchestration and vocal harmony were such a unique blending which set the benchmark for Choir music in India onward. The strike was successful and the song earned its place in history. The official record came in the market in 1981.

‘Karaar duaar bhaango’, ‘Haatey moder ke debey ke debey se bheri (1949)’ and ‘Bhango bhango bhango bhango bhango kaaraa (1948)’ these three songs were written on different occasions but maintain a inter connection in the textual correlation and also in musical arrangements. It is assumed that those were composed during 40s. The songs were composed to support the freedom fighters’ strike in the prison of Andaman Islands. ‘Haatey moder ke debey ke debey se bheri’ again proclaims the power of the masses. It is one of the very few IPTA songs which were recorded during that historic period.

The year, 1949 was so resourceful for Salil. ‘O aalor patho jaatri, ejey raatri, ekhaney themo na’, may be the most well-known mass songs of Salil which was composed in that year. It was formally recorded for three times in 1949, 1971 and 1981 by renowned artists including Debabrata Biswas, Prity Sarker, Manna Dey, Sabita Chowdhury and a chorus team led by IPTA artist Montu Ghosh. The first part of this song is poetic and mostly like prayer but the later part is totally loud and full of energy to wake up, take lead, and uphold the beauty of truth.

The metaphor of light and dark is a signature for Salil. It comes again and again with different meanings. Another song titled ‘E je ondhokaare bosey bandhadarey sudhu byartho ghaato aanaa’ composed in 1952 expressed pretty pessimistic Salil. He was always very honest to his true feeling. The communist party leaders failed to sense that poetic spirit and very unfortunately they criticised and banned some of his great creations like ‘Gayer bodhu’ composed in 1949 and that provoked the separation onward. The party also banned ‘Palkir gaan’ and that made Salil totally disappointed.

In 1949, Salil first appeared as a lyricist, composer and singer with the LP record containing two popular songs ‘Nondito nondito desh amar’ and ‘Nobarun rage rangere’. Most of the available records were done a long after that period when he was not an active political activist anymore. His continuous musical encounter makes him a legendary icon. In an interview with Kalpana Biswas, Salil once said, ‘Most often I would not even have two annas in my pocket. There would be warrants in my name. I had to walk a lot, but never thought that it was something painful.’ He was blacklisted in the mass media. His songs were censored by the state and very unfortunately by his own party also.

Salil created an outstanding piece in 1950 as response to ‘Krishnakoli’ by Rabindranath Tagore. The title of the song was ‘Sei meye’ which tells the plight of a dark girl who suffered through the famine. He adopted western Jazz music style in his music. But he didn’t leave the local instrument rather created new tune by using them. He composed several songs like ‘Dhan katar gaan’, ‘Ovinobo deshpremik’, Shantir gaan’, ‘Setu badhar gaan’, ‘Biz bonar gaan’  and so on. All the titles refer to typical social life but depict political messages through poetic presentation. The farmers, workers and specially the youths are the subjects of his songs. ‘Naker boodle norun pelam’ was one of his very first sarcastic songs composed in early 50s which was censored.

‘Hei samaalo dhaan ho, kasteyta dao shaan ho (1946)’ and ‘Ayre o ayre (1946)’ both songs were responses to the historic Tevaga Movement. That year, another movement of post office worker also inspired Salil to express solidarity and he composed the famous poem by poet Sukanta Bhattacharya titled ‘Runner’. ‘Obak prithibi’ was composed in 1946 as a response to the naval mutiny. Salil’s another popular song ‘Bicharpati tomar bichar’ was written in 1937 to celebrate the Andaman prisoner release day.

He was always keen to pick local music and blend it into a new one. Assamese folk song Bihu, Kirtan, folk songs of Chittagong, African dance music, American Jazz, eastern melody, western polyphonic style all these got new expressions in his music. But after the Independence in 1947, the IPTA started to loss its appeal. Most of the big names including Salil left IPTA within the next few years.

In 1982, Salil composed a few more great songs including ‘Pothe ebar namo sathi’, ‘Sedin aar koto dure’, ‘Odhikar ke kare dey’, ‘Ektu chup kore shono’ and many more which also gained popularity. These lyrics are sublime in arrangement but quoted with deep passion which Salil nourished during IPTA movements. Salil once said about his creations, ‘I think that is art. If I succeed in that, I am an artist’.

All these diversified creations made Salil an icon of political activist, a great artist but who is celebrating that political stature of Salil now? Simply no one!  KN Panikkar observed that, IPTA movement agenda of creating mass political consciousness to ignite counter-hegemony fails later as the political front could not manage it with same enthusiasm of cultural intellectuals. The absence of dialectical relationship between left politics and culture may be considered as the root cause of the dissolution of the movement. Salil fade into this apoliticising era and the entertainment world embraced him. Our political intellectuals, in the same way, failed to mediate politics and culture to the same direction. So, cultural organisations are still considered to be non-political body. And that made great artivist like Salil Chowdhury much unknown figure in the contemporary political discourse! ‘Pothey ebar namo sathi’— let’s recheck those!