The trial of the Chicago 7: a reflection on jurisdiction and oppression now and then 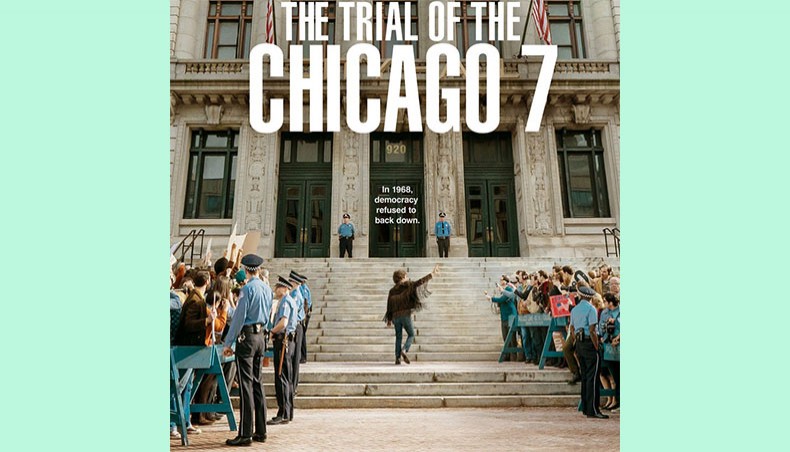 The 2020 film ‘The Trial of the Chicago 7’ is the story of the legal proceedings of 7 protesters who took stand against the Vietnam War in 1968. There were no rules of ethics within the walls of the Chicagoan courtroom, which uses the antics of a politically-motivated prosecution with a politically complicit judge. Historically, the commoners have collectively come together to prevent any wrongdoing but it is the system which always aims to demolish such act even if it costs lives of their people, writes MD Talebur Islam Rupom

THE chant echoes throughout Aaron Sorkin’s new historical courtroom drama based on the legal proceedings following the protests on 7 men who were charged with conspiracy and inciting riots while protesting the Vietnam War at the 1968 Democratic National Convention in Chicago in the United States.

This simple yet powerful statement inspires the central figures to use their even larger audience to do what they came to do — denounce the Vietnam War. Apparently, ‘The whole world is watching’ represents most of the revolution against oppression and jurisdictions across the world.

Although it is a drama based on American true events of the 1969 trial of the 7 convicted persons for alleged rioting in the 1968 Democratic National Convention, it is very much relatable with any present country and context. It does not matter which country you are from; it exposes the systematic suppression of the people by the rulers.

In the televised version, the mainstream government establishment clashes with provocative leaders of counter-culture and free speech (including members of The Black Panther Party and Students for a Democratic Society). In an era characterised both by heightened political divisiveness and an abysmally declining movie industry, the arrival of Aaron Sorkin’s ‘The Trial of the Chicago 7’ is more than aptly timed. It also comes timely, given the recent Black Lives Matter protests and their on-going fallout — protesters are again being charged after demanding justice.

The answer grows all too clear as the film progresses. There are no rules of ethics within the walls of the Chicagoan courtroom, which withstands the antics of a politically-motivated prosecution and a politically complicit judge. There are no rules of ethics when the judge orders Black Panther Bobby Seale (Yahya Abdul-Mateen II) be taken out of the courtroom, only to be dragged back in — to the horror of every spectator — beaten, bound, and gagged. The systematic obstacle to getting justice is very visible thoroughly. Perhaps, it is a common feature between the rulers and the commoners.

The key characters of the movie and true event resemble the rebellion happening across the world in the past, present and future. Tom Hayden (Eddie Redmayne), an educated young liberal with belief in the system, Abbie Hoffman (Sacha Baron Cohen), a court jester focused on cultural-revolution. Bobby Seale (Yahya Abdul-Mateen II), leader of the Black Panther Party who was lumped in with the others. Bill Kuntsler, the beleaguered yet determined defence attorney played excellently by Mark Rylance. The other defendants –– Rennie Davis, David Dellinger, Lee Weiner and John Froines –– are sidelined and have decreasing importance as the list goes on.

The conflict of ideas about the social change between Hayden and Hoffman is an interesting development throughout the film. Another performance worth mentioning is Joseph Gordon-Levitt as the duty-bound yet sympathetic prosecution attorney Richard Schultz. It shows how a public prosecutor can be helpless to maintain the ethical and moral standards set by the system.

Frank Lagella’s Judge Julius Hoffman paints a dreary picture of not only the American legal system but American politics at large. Despite the good intentions of the democratic system, if the people who populate that system have no regard for other people, particularly those who appear different or harbour differing ideas, justice is perennially jeopardised.

It also reminds me of the faulty justice delivery system of Bangladesh including many other democratic countries while watching the movie. Outwardly, Judge Julius Hoffman deserves an honorary mention to mimic the terrific reality in this screening, because the judiciary is the backbone of a transparent nation.

Manifestly, every dialogue is powerful and uncovers the darker side of any protest. ‘We’re not goin’ to jail because of what we did, we’re goin’ to jail because of who we are’ Hoffman exclaims, laughing maniacally as he reaches the apex of his fight with Hayden. ‘Think about that the next time you shrug off cultural-revolution.’ These are some of the strong dialogues which you can perceive throughout the movie.

It also evinces the catastrophe of linguistic choices such as aggressive adjectives in a protesting gathering. Just a minute is enough to stop a peaceful demonstration or to ignite a peaceful protest into an extremely brutal incident. Here comes the role of calm and careful leaders and their lexical choice which is shown as a failure through Tom Hayden’s erupting speech towards the protesters while one protestor is being beaten up.

Whilst, on the other hand, his fellows keep telling him to make it calm with their words, instead of flaming up the peaceful protest and risk the lives of the thousands. This illustrates that any protest is required to be methodical likewise its well-grounded reasons and rationalities.

Notably, there is another deep observation which this true event-based movie can convey to its foreign viewers about the difference between the roles of the rulers and commoners. To many extents, it is not only about the Vietnam War but also other wars.  Where American economic and foreign policies significantly connect to wars, still many common Americans try the best to oppose it and end the war.

Historically, it testifies that commoners collectively come together to prevent any wrongdoing but it is the system which always aims to demolish such an act even if it costs the lives of their people. For example, it is relatable to Bangladesh and its liberation war too. Whereas Pakistan (the then West Pakistan) was fully supported and equipped by the government of the United States, the common Americans had been protesting to stop the war. They had tried their best to raise fund and support Bangladesh financially and in multiple other ways. Perceptibly, the whole world is watching.

However, this film may take place in the 1960s, but it is very much about current issues of today; and also about the responsibility of language and its effect on a collective mood or group of people. Anyone who values free speech will be riveted by this film.

MD Talebur Islam Rupom is a contributor to the New Age Youth.