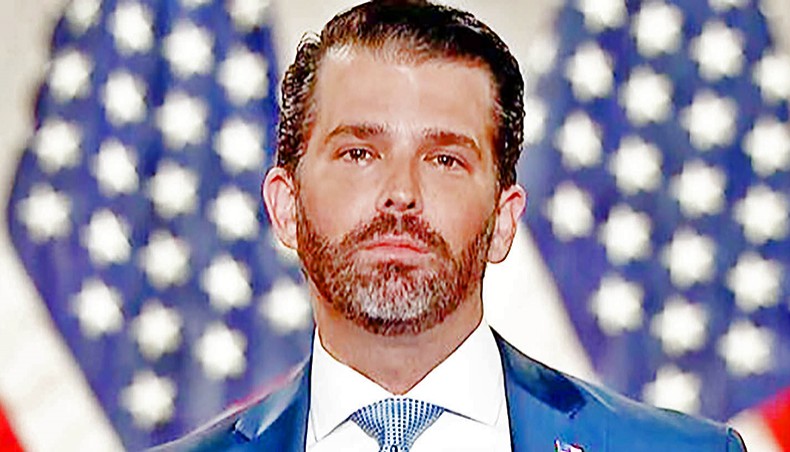 US president Donald Trump’s eldest son Donald Trump Jr has tested positive for COVID-19 and is quarantining without symptoms, the latest in a long list of infections among those with links to the White House.

‘Don tested positive at the start of the week and has been quarantining out at his cabin since the result,’ his spokesman said.

‘He’s been completely asymptomatic so far and is following all medically recommended COVID-19 guidelines,’ the spokesman said of the 42-year-old.

Trump Jr’s positive test follows infections for a string of others connected to the White House, including his father, who was hospitalised, the president’s wife Melania and Trump’s youngest son Barron.

Trump Jr is one of the most outspoken and aggressive defenders of his father, who is still refusing to recognize his defeat to Democrat Joe Biden in the November 3 presidential election.

In the days after the vote, Trump Jr called for his father to go to ‘total war’ against what he calls electoral fraud despite no evidence to support the claim.

Like his father he has also consistently downplayed the pandemic, telling Fox News as the virus surged around the country last month that deaths from COVID-19 had fallen to ‘almost nothing.’

Trump’s administration has been heavily criticized for its response to the pandemic and for downplaying the dangers.

Many in the crowds at his pre-election rallies were often maskless and not abiding by social-distancing rules.

They were a sharp contrast with Biden’s drive-in rallies and his scrupulous mask-wearing.

On Monday, the president-elect expressed frustration over Trump’s refusal to cooperate on the White House transition process, saying ‘more people may die’ of coronavirus without immediate coordination on fighting the pandemic.

With Trump refusing to concede defeat, Biden and his team have been unable to coordinate with government officials on crucial continuity of issues like national security, but also on emergencies like a distribution plan for COVID-19 vaccines to tens of millions of Americans.

Current US numbers — more than a quarter of a million deaths have been reported — have alarmed authorities enough to advise that people stay home for next week’s Thanksgiving holiday, when Americans usually travel to be with their families.

New York City has shut down schools for its 1.1 million students, while California will impose a 10:00 pm to 5:00 am curfew from Saturday.

There was however a new sign of hope on Friday as US biotech giant Pfizer and German partner BioNTech sought approval to roll out their coronavirus vaccine early.