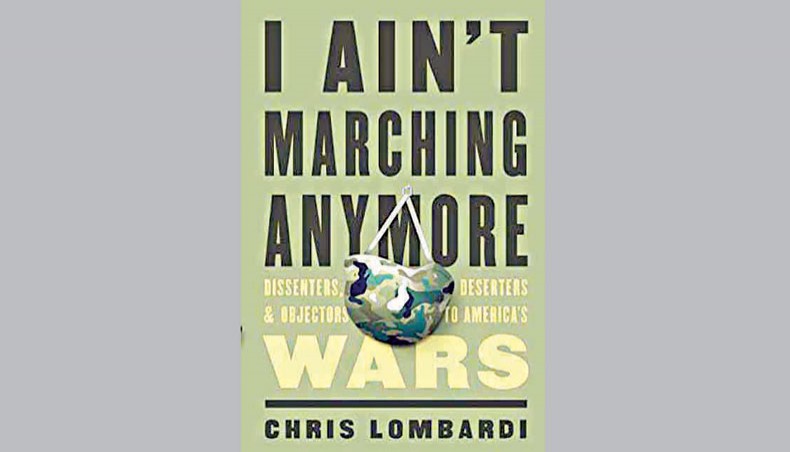 CHRIS Lombardi’s fantastic new book is called I Ain’t Marching Anymore: Dissenters, Deserters, and Objectors to America’s Wars. It’s a wonderful history of US wars, and both support for and opposition to them, with a major focus on troops and veterans, from 1754 to the present.

The greatest strength of the book is its depth of detail, the rarely heard individual accounts of war supporters, resisters, whistleblowers, protesters, and all of the complexities that catch so many people in more than one of those categories. There’s an element of frustration for me, in that one hates to read about generation after generation growing up believing war is good and noble, and then learning that it isn’t the hard way. But there’s also a positive trend discernable through the centuries, a growing awareness that war is not glorious — if not the wisdom that rejects all war, at least the notion that a war must somehow be justified in some extraordinary way.

During the US revolution, some soldiers took a little too seriously for their commanders’ liking the idea that they were fighting for the rights of equal citizens. They demanded those rights even as soldiers, and mutinied and risked execution to get them. The contradiction has never gone away between claims that soldiers are killing for freedom and claims that soldiers deserve no freedom.

A draft of the Bill of Rights included the right to conscientious objection. The final version did not, and it’s never been added to the constitution. But it has developed as a right to some extent. One can find such positive trends alongside negative ones like the development of propaganda techniques, and mixed one like the ebbing and flowing of levels of censorship.

Veterans started the first peace organisations in the early 19th century, and have been a major part of peace activism ever since. Veterans for Peace, an organisation that features in the later chapters of the book, has this week been trying to reclaim Armistice Day from the holiday many now call Veterans Day.

Veterans who oppose war are almost by definition people whose thinking on war has evolved. But countless people have gone into wars and into the military while saying they already opposed it. And countless members of militaries have dissented to all variety of degrees. Lombardi’s book includes all sorts of specific accounts, from Ulysses Grant going into the war on Mexico believing it was immoral and criminal, to more recent participants in wars disagreeing with what they are nonetheless doing.

More common than refusals to deploy have been desertions. Less common than those, but surprisingly frequent, have been departures to join the other side — something seen in the wars on Mexico, the Philippines, and elsewhere. More common than any refusal to obey has been speaking out after the fact. In this book we get accounts of US active-duty troops and war veterans back through the centuries speaking out through letters and at public events. We see, for example, that letters from US troops in Russia helped end US war-making there in 1919–1920.

We also find here a history of anti-war art and literature coming from veterans’ experiences following various wars — but more of it (or less censorship) following some wars than others. In particular, WWII seems to still lag behind other wars in anti-war treatment by books and films.

By the later chapters of the book, we come to the stories of many people well known today and in recent years in the peace movement. Yet, even here we learn new bits and pieces about our friends and allies. And we read about techniques that really should be tried again, such as the 1968 aerial dropping of anti-war flyers on US military bases.

Lombardi pays attention in these pages to how members of the military change their minds. Quite often a key part of that is somebody handing them the right book. This book may end up playing that role itself.

I Ain’t Marching Anymore also gives us some of the overlapping histories of the peace movement and other movements, such as civil rights. The movement for peace took a major blow in the United States when the Civil War was tied to a good cause (even though much of the world ended slavery without such a war — the rest of the world hardly figures into US thinking, or into this book for that matter). But resistance to WWII gave a major boost to the Civil Rights movement.

If I have any concern with such a well-written account, it’s that in reading the early pages it is an account of the typical victims of many of the wars, while the later pages are primarily an account of very atypical victims of the wars. From World War II forward, most war victims have been civilians, not soldiers. So, this is a book that chooses to be about soldiers and just happens as it goes back into the past to become a book about the overall damage war does.