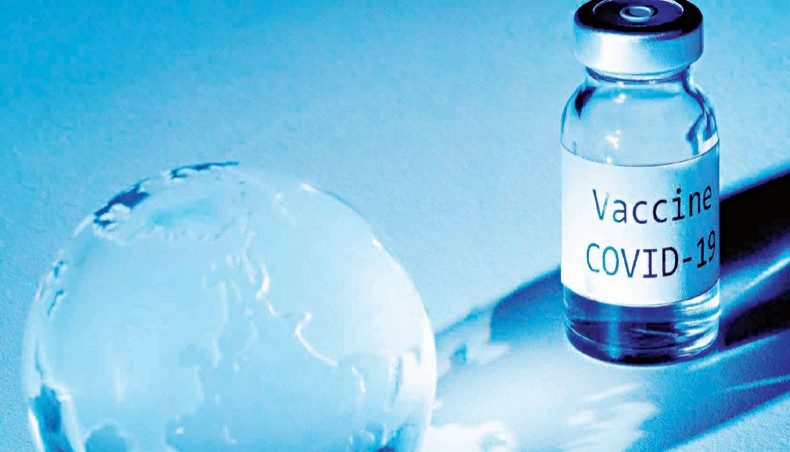 An illustration picture taken on November 19 shows a vial with COVID-19 vaccine sticker and an earth globe. — Agence France-Presse/Joel Saget

IS IT too preposterous to say that unless a vaccine is manufactured, its marketing is manipulated and other corporate-political interests are prepared and promoted, there will be second, third, and even more waves of the COVID-19 pandemic?

Mainstream narratives of the COVID-19 pandemic might brush aside such a statement as outrightly absurd. Mainstream narratives, which appear to be supplemented by what can be said ‘medical science wisdom’, have been dishing out COVID-19 stories since its outbreak where a reading between the lines is what appears to be warranted.

Medical science is still trying to cope with and understand everything related to the novel coronavirus — from the testing of the infection to treatment to vaccines that are rushed through to an eventual approval in an alarmingly short time and vehemently promoted by big industries. It is also not too absurd to look at the figures of infection, especially the growing infection rates in some countries and declining rates in other countries belonging to divided political-corporate interest camps.

It is hardly illogical to question the dominant COVID-19 narratives when the most severely affected country has just had its general elections and that other countries with an increasing infection rate allow their players to roll on to the sports fields and their political and business high-ups to tour the world to serve political and corporate purposes.

It is also a bit difficult to trust the various, alternately unnerving and confusing, narratives dished out by medical science. This is more so as medical science, which even half a century ago enjoyed a trust for its scientific objectivity and integrity and operated largely outside the marketplace subsidised by governments and universities, has overwhelmingly been ‘incorporated’ in research divisions of corporations, leaving it highly vulnerable to political and corporate manipulations. There is little scope not to question that the largely untested and half-tested COVID-19 vaccines, which are so aggressively promoted to treat a disease with the case mortality rate being below 2 per cent even if we subscribe to mainstream narratives, are not manipulated by corporate interests.

The recent history of vaccine politics and business is a bit scary and disheartening. A look at the adverse impact of a number of vaccines, promoted by big-money actors, might dissuade someone from being injected with any of the forthcoming COVID-19 vaccines.

All this might sound like a conspiracy theory. But what can one do than doubt the dominant narratives, be it of a pandemic, when corporate interests have become the way of the world?

We have, as it appears, for long been living with pandemics of various kinds that have killed many, marginalising many more but, all the while, benefiting the actors behind the big money. Pandemic, not to confine it to a clinical disease, is a state that is manufactured and manipulated that grows out of a destructive greed and often operates under the euphemism of change, charity and development conceived of as progress.

Indian philosopher-activist Vandana Shiva in a recent article summarises that ‘the ongoing pandemic is not a war. The pandemic is a consequence of war, a war against life. The mechanical mind connected to the money machine of extraction has created the illusion of humans as separate from nature, and nature as dead, inert raw material to be exploited. But, in fact, we are part of the biome. And we are part of the virome. The biome and the virome are us. When we wage war on the biodiversity of our forests, our farms, and in our guts, we wage war on ourselves.’

The health emergency, induced by the ongoing pandemic, is inseparable from the emergency of biodiversity loss and of the climate crisis. All these emergencies, Shiva argues, ‘are rooted in an economic model based on the illusion of limitless growth and limitless greed, which violate planetary boundaries and destroy the integrity of ecosystems and individual species’. New diseases and disasters are not something that have fallen on us from the blue; they, rather, arise because the big money has destroyed, continues to destroy and manipulate ecosystems for profits.

Big money, which has already taken hold of state power almost everywhere, now gets its interests subscribed to and promoted by national and global policies, laws and regulations. Disasters and pandemics are by and large a result of the war of big money on nature and of its compulsive passion to promote itself. That is why big money ends up promoting itself even when it intends to better human lives, following dehumanised norms of the capital.

Quite unsurprisingly, therefore, the biggest charity organisations, founded and funded by the big-money actors, would do more harm than good even when they speak of working to ensure security and progress. Food security is a case in point. When they speak of ensuring food security, the charity organisations linked with other businesses go for a control over agricultural diversity and the monopoly over agribusiness.

When the world already produces more food than needed to feed all — the world already grows more than enough to feed 10 billion people which is nearly 3 billion more than we currently have — what we need is to ensure an equitable distribution of food so that it reaches everyone. If charity organisations, funded by big money, actually wanted to ensure food security, they would invest in, and help facilitate, distribution.

But what they, in reality, do reflects business interests. The Gates Foundation and the Rockefeller Foundation are engaged in a major project in Africa, the Alliance for a Green Revolution in Africa, also known as AGRA, promising food security for African people but the project, which has been undertaken 14 years ago, has but destroyed traditional small farmer production of essential food crops in favour of monoculture crops, expensive chemical fertilisers and GMO seeds. In short, the project has weakened food security for African people and bankrupted farmers.

American writer-researcher F William Engdahl says: ‘Rather than help local small farmers to improve their yield per acre, the AGRA merely repackages the 1960s Green Revolution in Mexico and India for Africa, home to some of the world’s richest farmland soils. That Green Revolution of the 1960s, initiated by the Rockefeller Foundation, introduced industrial large-scale agriculture mechanisation and introduction of chemical fertilisers and seeds from multinationals which went to the benefit of large farmers and destroyed much of the economy of small producers. That predictably bankrupted countless small producers. The result was that while select wealthy producers thrived, millions of poorer farmers were forced to flee to the cities where they settled in urban slums. But that in fact was a major aim of the first Green Revolution as it created a cheap workforce for the globalisation drive of manufacture that was to follow.’

In 14 years, AGRA is reported to have influenced member governments to promote commercial seeds and expensive chemical fertilisers of multinational companies, by promising grand gains, which, however, never did materialise. In the meantime, traditional small farmers or communities are forbidden to use farm-bred seeds. This pattern of monopolising agribusiness destroying agricultural diversity and biodiversity is also going on in other parts of the world, including South Asian countries.

This is no different from premeditated strategies of a business syndicate to maximise profits citing a shortage of food and livelihood even when there is a surplus of supplies. It is, in fact, the nature of the big money and the inherent drive of the economy of capitalism that speak of shortage and create disasters, real or artificial, to exploit people and the mother earth.

As there has been a corporate takeover of democracies and public agencies, overlapping corporate and political interests continue to destroy the earth and the destruction would certainly result in the emergence of more disasters and pandemics, real or artificial, which would then be turned into instruments and strategies to maximise profits and to pursue political goals.

There are reasons to believe that the ongoing pandemic is, and going to be, highly manipulated. The vaccine which might hit the market anytime soon if not during the second wave as feared is also likely to be another instrument in the hands of the dominant political-corporate interests.