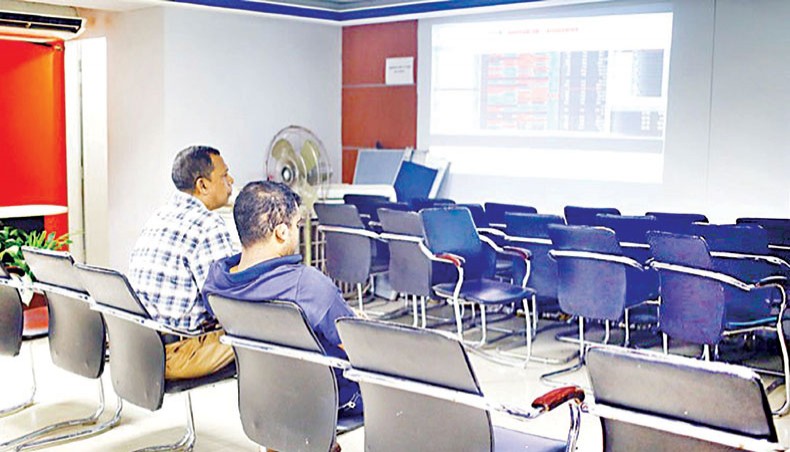 A file photo shows investors looking at share price movements on a screen at a brokerage house in the capital. Dhaka stocks declined for the second day on Thursday as investors remained cautious amid worries over mutual funds following the formation of a committee by the Bangladesh Securities and Exchange Commission to investigate an abnormal surge in unit prices of five MFs.— New Age photo

Dhaka stocks declined for the second day on Thursday as investors remained cautious amid worries over mutual funds following the formation of a committee by the Bangladesh Securities and Exchange Commission to investigate an abnormal surge in unit prices of five MFs.

The market started Thursday’s session downbeat and finished the session in the negative zone despite some recovery in the middle of the session, market operators said.

The DSE on the day launched a 15-minute pre-opening session and a 10-minute post-closing session after completing users’ acceptance test (UAT) and holding market awareness programmes among stakeholders.

Earlier on October 20, the Bangladesh Securities and Exchange Commission approved the sessions for the country’s premier bourse.

The turnover on the DSE on Thursday inched up to Tk 585.31 crore compared with that of Tk 544.99 crore in the previous session.

The subscription of Robi’ IPO began on Tuesday and a large number of investors placed their IPO applications for acquiring shares of Robi, the second largest mobile operator in the country.

Robi would raise Tk 523.79 crore through issuing 52.37 crore shares on the market. The subscription will end on November 23.

Some brokerage houses on Thursday declined to give margin loans to clients to invest in mutual funds as a notification issued in 2010 by the securities regulator bars stockbrokers and merchant banks from giving loans to their clients for MFs.

The brokerage houses used to provide loans to clients for investing in the MFs despite the BSEC notification, market operators said.

The BSEC on Tuesday formed a committee to investigate unusual price hike of five mutual funds that prompted many investors to sell off the units of the funds.

So, a section of investors paused trading shares on the market, they said.

EBL Securities in its daily market commentary said, ‘Most of the opportunist investors were releasing their funds to participate in the IPOs while worried investors of the mutual fund sector mostly favoured offloading their holdings since the BSEC declared scrutinising exorbitant price level of some selective units.’

Share prices of most of the companies declined on Thursday, but a surge in share prices of Beximco Pharmaceuticals, BEXIMCO, Renata Limited, and British American Tobacco saved the market from a significant fall.

Beximco Pharmaceuticals led the turnover chart with its shares worth Tk 67.29 crore changing hands on the day.