No place for violence in Islam 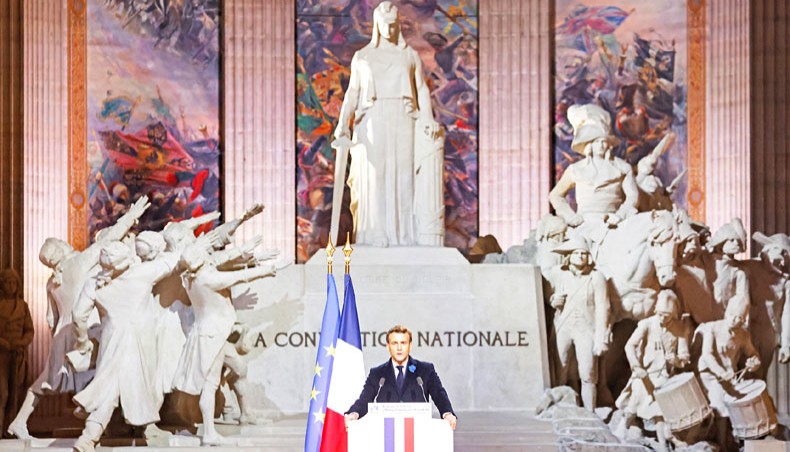 French president Emmanuel Macron delivers a speech inside the Pantheon monument, during a ceremony honouring the World War I soldiers in Paris on November 11. — Agence France-Presse/Pool/Ludovic Marin

THE strategy is quite old. Just the presentation is a bit different. It is to tease the Muslims. That is it. The strategy is to hit the most sensitive emotions of the Muslims. What is the purpose? The Muslims all over the world will be outraged and will be vocal in protest. In addition to peaceful protests, some extremists will carry out terrorist activities and some casualties will take place. And the terrorists activities will be spread through the media. ‘Look, look! The caste of these Muslims is the caste of a terrorist. They are not right any more!’ From Salman Rushdie’s Satanic Verses in the 1980s to Charlie Hebdo’s caricature today are perhaps dedicated to the same goal.

So, what is the driving force behind the caricatures? Islam spreads rapidly in the west. On the one hand, the Muslims who found a place there sometime in the past as slaves, refugees or immigrants are already there. At the same they are, as there is a perception, giving birth to children at a high rate. More children are born and the team is getting heavier day by day. And although some of them take on a slightly western style, they are, in reality, totally unmoved from their original faith. They want to keep a Muslim identity and that is what they feel comfortable with and are proud of. The new danger added to this is that the number of initiates in Islam is increasing day by day. So, the intent is to reduce this flow, even if it is just a little bit, by making a little chaos and sticking a good terrorist badge on the Muslims.

That is just one side of the coin. The other side is also quite interesting. Western policymakers are divided on their overall outlook on Islam and the Muslims. Liberals do not want to worry about religion. They think that religion is a personal affair. Let anybody practise any religion. They believe in the coexistence of all religions. But radicalists are reluctant to accept it. With a continued increase in the power of Islam in the west, there has been an uproar among them and the radicalists are uneasy with that and they assume it to be their duty to stop the increasing power of Islam at any cost. For the past few decades, the media has been constantly promoting these radicalists. Political leaders reassure them to hold their position on the voting market or strengthen it, saying ‘but we are with you’. The support of the French president Emmanuel Macron for Charlie Hebdo’s caricature in the name of the freedom of expression might be a manifestation of that strategy.

The question is, however, if all these tactics could save them in the end. According to various sources, many of those who were sent to Iraq and Afghanistan to punish Muslim ‘terrorists’ have returned as Muslims. The kind of behaviour that Islam demands from its followers, the beautiful character and sacrifice of the Muslims of the golden age that we see in history, however, appears to be largely lost in today’s Muslims. Yet there may still be something interesting in the overall demeanour of the Muslim society that attracted many westerners, who came to suppress Muslim ‘terrorists’, encouraging their conversion.

Throughout the ages, anti-Islamic propaganda has rather helped to spread Islam. Quite ironically, through this anti-Islamic propaganda the voice of Islam reached many truth-seeking people who might not have, otherwise, been curious about Islam. In Makkah, when the Prophet (PBUH) was facing a strong opposition from the opponents of Islam and the number of initiates to him was slowly increasing one by one, opponents used a massive propaganda against him as one of their main tools, being unable to cope with his hypnotic power. During the hajj, people from all over the Arab world used to come to Makkah. The Prophet (PBUH) used this opportunity to reach out to many people. And the opposition used to spread strong propaganda so that the people who came for hajj could not side with him in any way. As a result, the voice of Islam was reaching those to whom the Prophet (PBUH) could not reach himself.

So, is there really anything to worry about so much? By spreading propaganda and making noise against Islam, they want to keep the truth-loving common people away from Islam. The biggest challenge for them is the Qur’an, which still exists among Muslims in its intact state. God has promised that He has taken upon Himself the responsibility of keeping it intact. They have made a fuss in the past, are still doing it, and will continue to do so in the future, so that the nectar of the messages of the Qur’an cannot reach the people. That is the reality. ‘And those who disbelieve say, “Do not listen to this Qur’an and speak noisily during [the recitation of] it so that you may prevail over it.”’ (Al-Qur’an 41:26)

What the Muslims should do in such a situation? Make a fuss over it or sit still? It would not be fair to say that when someone hurts your heart you cannot even cry. But remember that Islam is a religion of peace. Peace is the power of Islam. The Muslims must protest through writings, speeches, statements, processions-meetings, diplomatic protests etc, to signify that hundreds of millions of Muslims around the world feel very hurt and disappointed by such actions by the French government. Protests should not take the form of violence and terror. If it takes the form of violence, you have been used as a tool to accomplish their purpose. Peace is the teaching of Islam, the power of Islam. ‘The worshippers of the Merciful walk humbly on the earth, and when the ignorant address them, they respond saying: “Peace”.’ (Al-Qur’an 25:63)