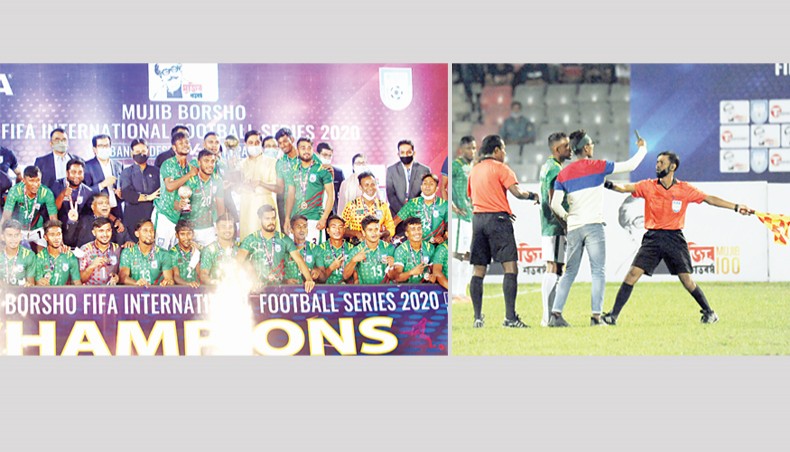 Bangladesh players celebrate with the trophy at the end of their second of the two-match FIFA International friendly series against Nepal while a pitch invader takes a selfie with host captain Jamal Bhuiyan (2nd-L) at the Bangabandhu National Stadium on Tuesday. — New Age photos

Bangladesh won the two-match Mujib Borsho FIFA International Football series 1-0 against visiting Nepal after the second match ended in a goalless draw at the Bangabandhu National Stadium on Tuesday.

The hosts had defeated Nepal 2-0 on November 13 in the first match when forward Nabib Newaz Jibon and Mahbubur Rahman Sufil scored one goal each in either half.

In the absence of head coach Jamie Day, who tested positive for COVID-19 on Sunday, assistant coach Stuart Watkiss stood in the dugout as Bangladesh played attacking football from the very start of the game in front of around 15,000 spectators.

Bangladesh almost took the lead in the 23rd minute but forward Suman Reza’s 25-yard shot off a cross from forward Nabib Newaz Jibon whiskered past the post.

Suman made another attempt at goal in the 31st minute, but his grounder from the box was well saved by Nepal goalkeeper Chemjong.

Nepal got back into rhythm in the second half with some attacking displays and came close to scoring in the stoppage time.

Substitute Nawayug Shreshtha almost won Nepal the game in the last stretch but his header from inside the box ricocheted off the goalpost, much to the relief of the hosts.

Assistant coach Watkiss termed the game a difficult one and expressed disappointment that his charges could not create enough scoring chances.

‘It was a difficult game against a good team. Nepal played very well. For a long period of the game, Bangladesh also played quite well, had some good spells but unfortunately did not create the number of chances…It was really quite a close game. A draw probably is fair.’

Nepal included defender Ranjit Dhimal, who tested negative for COVID-19 on Sunday, in their starting eleven in place of Ajit Bhandari.

Besides Ranjit, Nepal made four more changes in the playing eleven, but couldn’t salvage the series with a win.

Sufil was adjudged Most Valuable Player of the series.

The most exciting but alarming moment of the game came in the 73rd minute courtesy of a rowdy spectator, who jumped the fence and ran half the length of the pitch to take a selfie with Bangladesh captain Jamal Bhuiyan.

The fan was later steered away by security personnel.