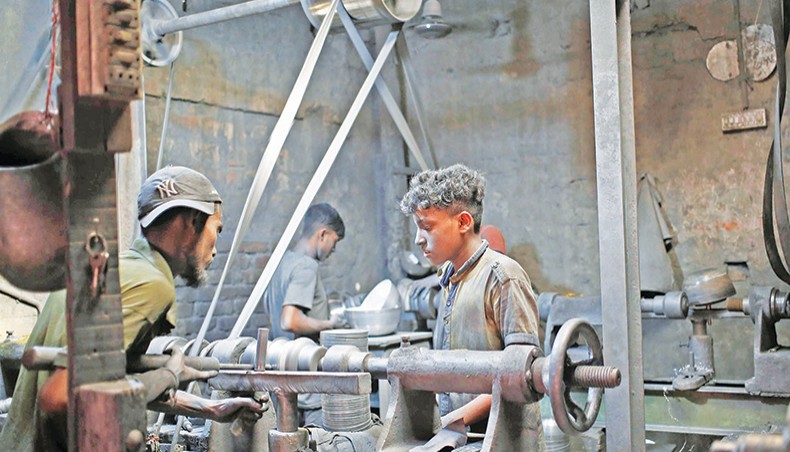 Underage labourers work in an aluminum utensil factory at Keraniganj in Dhaka without taking necessary precautions and safety measures, exposing themselves to metal dust and the novel coronavirus. — Sourav Lasker

The government has ordered operations of mobile courts in Dhaka and other places to ensure the mandatory use of mask in all public places, including markets, transports and offices, in a bid to check further spread of the coronavirus.

‘The agencies concerned have already been asked to launch mobile court operations in Dhaka in a day or  two to implement the government order for the mandatory use of mask in all public places,’ cabinet secretary Khandker Anwarul Islam told a press conference at the Secretariat after the weekly cabinet meeting on Monday.

Presiding over the virtual cabinet meeting from her Ganabhaban residence, prime minister Sheikh Hasina asked the relevant authorities to enforce the government directive more strictly across the country to prevent the spread of the novel virus infection detected here on March 8.

‘As the second wave of COVID-19 infections is feared during the winter, the prime minister has once again asked all concerned to take strict precautionary measures,’ the cabinet secretary said.

Local administrations have already running mobile courts in divisional cities and district towns and punishing people for not wearing masks in public places as the number of COVID-19 cases and the positivity rate have gone up with the advent of the winter.

But no such measure was visible in the capital by the agencies concerned for the enforcement of the government order although the ‘no mask, no service’ policy was announced last month.

Earlier, the prime minister in the November 2 weekly cabinet meeting asked the agencies concerned to ensure the mandatory mask use by enforcing the ‘no mask, no service’ policy in both public and private sectors against the possible second wave of COVID-19.

The country’s coronavirus cases rose to 4,34,472 while the number of deaths from the virus infection reached 6,215 till Monday, according to official statistics.

Monday’s cabinet meeting approved the drafts of the ‘National Economic Inclusion Strategy’ placed by the Financial Institutions Division, the ‘Agreement on Cooperation and Mutual Assistance in Customs Matters’ placed by the Internal Resources Division and the ‘National Atomic and Radiation Related Emergency Preparedness and Response Plan’ placed by the science and technology ministry, the cabinet secretary mentioned.

The ministers and secretaries concerned joined the cabinet meeting from the Secretariat.

Anwarul said that the national economic inclusion strategy was aimed at developing an effective and sustainable accounting system digitally.

He said that the money under the government’s stimulus packages and safety net programmes was now being distributed through bank accounts and mobile banking, which would raise the percentage in 2020.

About the emergency preparedness and response plan against nuclear projects and possible radiation, the cabinet secretary said that the plan was prepared as per the International Atomic Energy Agency’s safety guidelines to manage any possible disaster from nuclear power uses as the country’s single-biggest Rooppur Nuclear Power Plant Project was being implemented in Pabna.