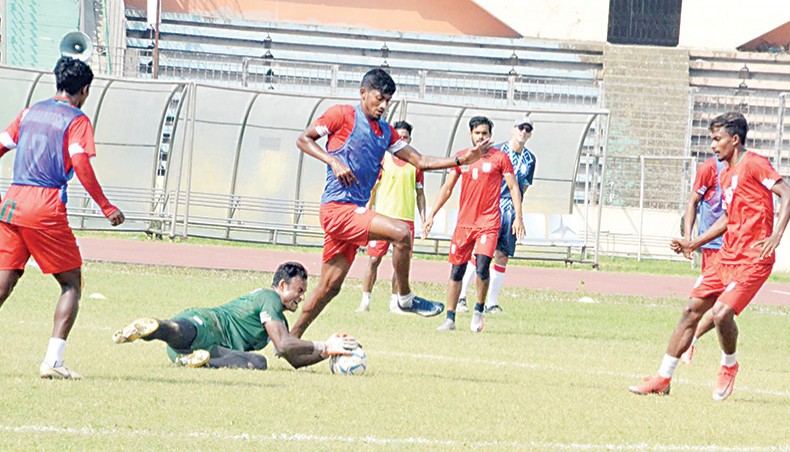 ‘Without Jamie, the focus on the game will be the same because we want to win. The instructions, tactical things are the same if it is from Jamie or from Stuart [Watkiss]. So, that is our duty to follow what the coaches are expecting for us,’ Jamal said during a virtual press conference on Monday.

The match will kick-off at 5:00pm at the Bangabandhu National Stadium and will be televised live by BTV and T Sports.

‘Jamie day’s follow-up results came positive…So, his participation in the next match will not be possible. But his advice will be followed by assistant coach Stuart Watkiss,’ Bangladesh Football Federation general secretary Abu Nayeem Shohag told the media.

This will be the first time that Day will be missing in the Bangladesh team dugout in an international match since he took over the charge in May 2018.

Bangladesh trained under Watkiss for the last two days in the absence of their head coach.

Watkiss hinted a couple of changes for today’s game but did not disclose the names.

‘You might see a couple of changes tomorrow [today], but you won’t see a lot of changes,’ said Watkiss.

Nepal team coach Bal Gopal Maharajan vowed to put up a better show in today’s match by rectifying the mistakes they committed in the first game.

‘We made some mistakes in the defending part…I hope, in the tomorrow’s [today] match, our whole team will show good performance…They will give 100 per cent for better performance and better results,’ said Maharajan.

Nepal captain and goalkeeper Kiran Chemjong said that victory was the only thing in their minds.

‘We are definitely going to play for a win because we lost the first match,’ he said.

Maharajan hinted the inclusion of defender Ranjit Dhimal, who tested negative for COVID-19 on Sunday, in today’s match.

‘His [Ranjit Dhimal] return is good. He might be in the XI tomorrow [today],’ said Maharajan.

Bangladesh won the first of the two friendlies by 2-0 goals at the same venue on November 13.