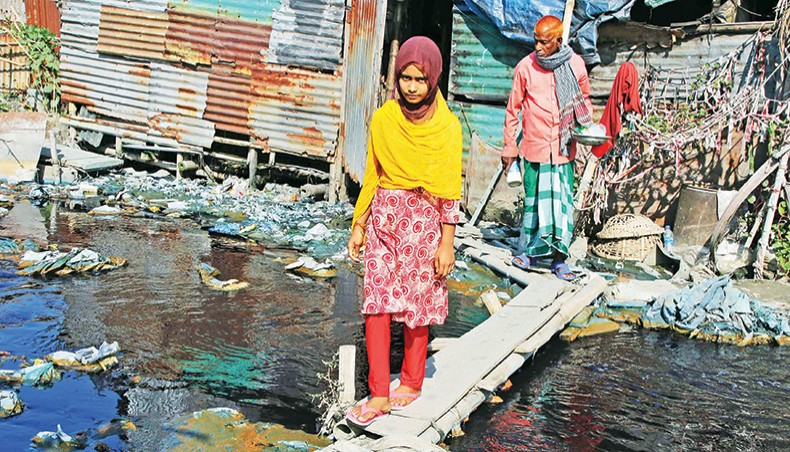 People cross a canal that takes industrial wastes and human sewage to the Buriganga multiplying environmental pollution and creating serious health hazards. This photo was taken at Baraitala of Shyampur in Dhaka on Sunday. — Sourav Lasker

A number of projects initiated by different agencies to conserve the rivers around Dhaka from grabbers and polluters as well as ensuring their navigability did not yield expected results due to a piecemeal approach and lack of coordination.

In a coordination meeting chaired  by local government and rural development minister Md Tajul Islam at his office on Sunday, mayors of Dhaka, Narayanganj and Gazipur cities and government officials criticised activities of some government agencies saying they initiated some projects without considering their overall impacts.

This would only lead to a waste of public money, they said.

There are overlaps in their activities as different agencies initiated similar projects in the same areas and such fragmented projects would create problems during execution of any master plan for conserving the Buriganga, Balu, Turag, Shitalakkhya and Dhaleswari from the grabbers and polluters, mayors and officials told New Age after the meeting.

They praised Bangladesh Inland Water Transport Authority for its eviction drives aiming to free Dhaka rivers, but at the same time criticised it for initiating a river-based beautification project going beyond its jurisdiction.

The agency, however, had not performed its task accordingly to evict the grabbers from the banks of the Meghna, Karnaphuli and other rivers, they said.

They also criticised the department of environment for its complete failure to control pollution in the canals, rivers and other water bodies caused by mills and factories regularly discharging untreated effluents.

The local government engineering department and railway department constructed low-height bridges on Dhaka rivers, they said and added that this hampered the government’s plan for developing circular waterways.

Tajul chaired the meeting as the chairman of the committee formed to execute the master plans for conserving the five rivers around Dhaka, the Meghna and the Karnaphuli by curbing the processes of grabbing and polluting as well as ensuring navigability.

Though the taskforce was formed in 2016, the master plans were approved in 2019 with the aim of freeing the seven rivers from pollution and grabbing within 10 years.

‘We chalk out plans and operate according the mandates. But the BIWTA initiated the eco-park development projects and waste management projects going beyond the jurisdiction,’ he added.

The department of environment, he said, made obtaining trade licenses mandatory before collecting clearance certificates from the agency.

‘It is a wrong procedure in the sense that if a business gets a trade license, it would not care to attend to other issues,’ Taposh said.

Selina said that they faced problems while planting trees on the banks of the river Shitalakshya as there is an embargo imposed by BIWTA and later the agency initiated the eco-park development project.

Jahangir said that he had development plans targeting the Balu, Turag, Chirai rivers and eight large canals flowing across Gazipur. ‘We face criticism from our voters for not being able to execute projects,’ he said.

He said that he pointed out to all in the meeting that all the factories located in Gazipur were discharging untreated effluents into the water bodies, canals and rivers while department of environment took no action.

National River Conservation Commission chairman Md Muzibur Rahman Hawlader said that he criticised the agencies for not taking actions against the 33 illegal jetties built on the Buriganga and illegal encroachment on the Meghna, Karnaphuli and Brahmaputra.

Environment ministry additional secretary Md Billal Hossain said that he would take necessary steps for reviewing action plans of the department of the environment after getting the resolution of the Sunday meeting.

State minister for shipping Khalid Mahmud Chowdhury welcomed the spirit of the mayors for expressing interest in working for conserving the rivers.

‘BIWTA initiated the development projects as immediate past mayor did not show interest in collaborating with us. If Fazle Nur Taposh wants to extend his support, we don’t have any problem,’ Khalid Mahmud said.

But things must be done immediately, he said, adding, ‘Otherwise the grabbers might take advantage of the time elapsed due to foot-dragging,’

LGRD minister Tajul Islam in a formal briefing told the press that he ordered the agencies concerned to take and implement projects in coordination with the mayors for ensuring maximum utilisation of the public money in the greater interest of the nation.

‘We are also working to develop a waste management system in Dhaka, Gazipur and Chattogram,’ he said.

Dhaka WASA was asked to develop its sewerage treatment plants immediately while the department of environment was asked to control the discharge of effluents by the factories, Tajul said.

Thirteen low-height bridges on Dhaka rivers would be demolished, said Tajul, adding that all grabbers, be that an agency or individuals would be evicted.

‘We will restore the rivers and canals of Dhaka to turn the capital into one of the most beautiful cities as per the master plan,’ Tajul claimed.