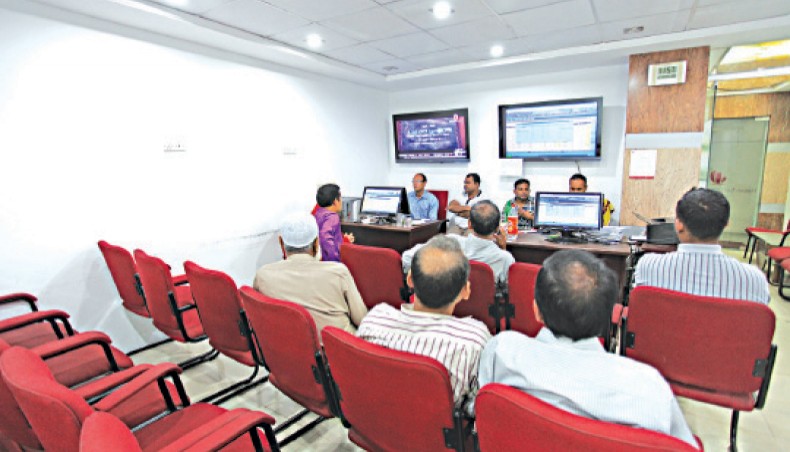 A file photo shows investors monitoring share price movements at a brokerage house in Dhaka. Dhaka stocks dropped in the past week as investors went for share sales ahead of the initial public offering subscription of the country’s second largest telecom company, Robi. — New Age photo

Dhaka stocks dropped in the past week as investors went for share sales ahead of the initial public offering subscription of the country’s second largest telecom company, Robi.

The core index lost in most sessions of the past week as investors went for share sales ahead of the IPO subscription of Robi Axiata.

Investors were keen on reserving funds for the company’s IPO subscription which would commence on Tuesday.

The IPO subscription of Crystal Insurance also started on November 10 and would continue until November 16 while bidding for Index Agro Industries shares ended on November 4.

A string of IPO subscriptions within a short time put pressure on the secondary market as a large amount of funds remained stuck on the primary market.

EBL Securities in its daily market commentary said, ‘Several investors have been disposing of their current position to join the forthcoming IPO subscriptions which kept the market depressed for the past few sessions.’

According to the DSE data, around 70 companies became stuck at the floor price over the week while the number stood at around five or six a month ago.

The Bangladesh Securities and Exchange Commission introduced the floor price system on March 19 to check the free-fall on the market amid the COVID-19 outbreak in the country.

Shares of Beximco, Beximco Pharmaceuticals and BRAC Bank advanced over the week.

Share prices of two Beximco companies surged for the second week after the health and family welfare ministry, Beximco Pharmaceuticals and the Serum Institute of India signed a deal on November 5 to buy 30 million doses of the Oxford University vaccine being developed by AstraZeneca.

Mutual funds dominated the market over the week, capturing 18.3 per cent of the week’s total turnover. The sector advanced by 11.4 per cent over the past week.

Nine of the 10 highest gainers in the past week were from mutual funds.

Before mutual funds, the insurance sector dominated the market for the last couple of months.

The dominance of the two sectors has destabilised the market in recent months.

Average share prices of non-bank financial institution, textile, general insurance and pharmaceutical sectors dropped by 3.8 per cent, 3.0 per cent, 2.9 per cent and 0.5 per cent respectively.

Alongside mutual funds, share prices of engineering and bank sectors advanced by 9.3 per cent and 0.5 per cent respectively.

Daily average turnover on the DSE increased to Tk 911.28 crore in the past week compared with Tk 844.49 crore in the previous week.