Tourism: is a thing of beauty or a curse forever? 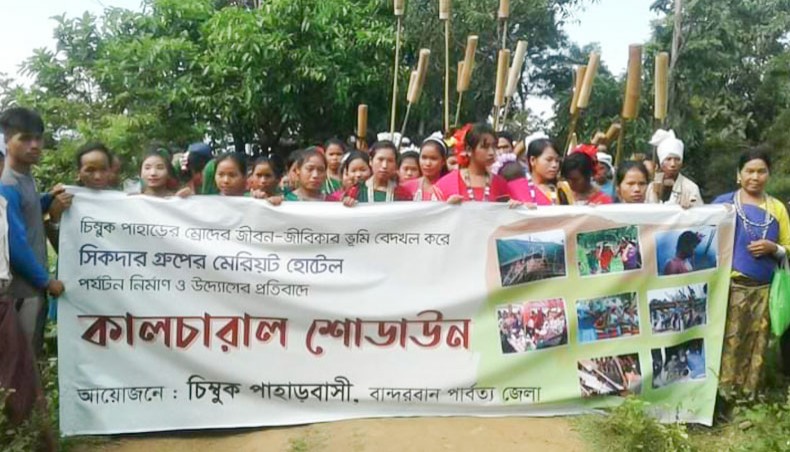 Indigenous Mro communities in their traditional attire protested at the construction of a five-star hotel at the Chimbuk Hill on November 8, 2020 in Bandarban. — Alik Mree

‘Here in Chimbuk, there is no single primary school, not even a government high school. How you preach development here, how you say that you are undertaking development for the Mro; for the development of Mro you are building hotel. If any Mro people go and grab your land, if we go to your place and say — this is our tourist spot, how would you feel, ask yourself by placing your hand on your chest. The day you find the answer to this question, you will understand our question’ — these are the words of a young leader Reng Young Mro who talked in front of thousands of indigenous people who were protesting against the construction of a five-star hotel in the Chimbuk Hill, Bandarban. Ridwanul Haque writes about the dynamics of tourism on indigenous lands

IF LITERATURE is to generate empathy, English poet John Keats’ poem Endymion where he says ‘a thing of beauty is a joy forever’ might prove underwhelming on many occasions. Another saying, taken from M H Hungerford’s Molly Bown (1878), ‘beauty is in the eye of the beholder’, that opens up the possibility of subjective reading of beauty. The beholder can be of predatory or powerful class that defines beauty undermining the realities of others. These widely used literary expressions have their inherent fallacies. Well, no more literary vivisection.

Let us consider some scenarios, where beauty did exist, then perished with time, but still make headlines as tourist destinations, where in the process of cherishing beauty people and nature are victimised. The aftermath is less heard, gets less attention in travel blogs and channels. Venice, a well-known international tourist spot that sees more than 10 million tourists each year, has a long history. It became the financial centre of Europe during the last quarter of the first millennia. It has manmade structures that seem floating on the sea. It has bridges crisscrossing the waterways, and canoes, known as gondola, are signature transport of the city. Time went by, technological breakthrough has made communication easier and affordable that, thousands of cruise ships anchor there each year making the place — a tourists’ cauldron. Tourist influx has made Venice lose the Venetians who are its original dwellers. In 1951, one hundred and fifty thousand Venetians were living there, the figure dropped by two-third in 2010. As an international tourist hub, the place has been witnessing skyrocketing commodity price, non-withstanding pressure in sewerage lines, and it is non-liveable by any sound standard as tourists keep the place sardine-packed throughout the years. Now two times more Venetians are living offshore than the number of Venetians living in Venice. They feel like they are castaways.

The Venetians saw the efflorescence of financial capitalism, helped spread its practitioners, made it a hub for the Eastern and Western Europe; and when capitalism reached its peak, it rendered the place over-exploited and made it a mere historical relic to eyes of the beholders. Protectors turned into preys. Such is the tragedy.

Three Idiots — a movie that is considered Bollywood’s one of the best masterpieces and a huge box-office success — has changed the scenario of Ladakh. The movie’s few scenes were shot in this region. Following the release of the film, the place turned into a hotbed of tourists. The visitations of tourists drove the place’s ecological resiliency beyond its break-even point. The water sources are polluted now; plastic packets and bottles, abandoned clothes and human wastages are everywhere. Locals are enduring drinking water crisis. High elevation of their habitats has made the job of collecting water more painstaking.

They say that the movie has played an instrumental role in changing attitude towards education in India. But, the irony is — the changes in attitude could not save the place and its home grown children’s lifestyle. Some YouTube footages can be seen where they show that struggle for education of the children of Ladakh. Yes, institutional education could not be of that much help, at least the way it produced Bollygarch, and, off-course, most of the tourists in this world.

The reality is same at home as well. What happened in Sajek, Ranglamati alone says it all. In Sajek, the development of tourist resorts evicting Jumma people from their ancestral land is in other words is demonstration of the way a Bengali chauvinistic state is ruling in the Chattogram Hill Tracts. The situation is best described in the works of Hana Shams Ahmed. Now, the number of tourists exceeds the number of its inhabitants.

In an earlier contribution to New Age Youth titled ‘Development: tourism industry in CHT, at what cost?’ published on March 15, 2020, I have described some of the scenarios of how such tourism related activities are not paying off the righteous. Now, to see how exoticising a place plays in the hands of ethnocentric state-backed capitalist class, some specific strategies must be publicly debated.

Social networking sites have numerous travel related groups that keep people interested in travelling to places. There are trekkers, who are online celebrities and keep posting travelling and trekking related information and images. There is an array of different videos shot in the CHT and uploaded to YouTube, and the number is on the rise.

The language generally used in those contents are sometimes esoteric, sometimes full of bragging rights, and sometimes — full of ultra-nationalistic sentiments that hold no respect for other the rights of the other ethnic groups in Bangladesh. They even do not know how indigenous lifestyle underpins ecological balance; rather they promote different approach to natural management and conservation process.

Some of those social media posts read as follow: ‘conquer the zenith’, ‘explore the unexplored’, ‘as adventurous as hell’, ‘as beautiful as heaven’ et cetera. These are the expressions they use in their contents. Well, after all of these, more traps and alluring scenes are set; event management companies or personnel are there to facilitate the progression and accomplishments. Thus they blaze trails for the upcoming predatory development process. In remote places of the CHT, many springs, cascades and hills are situated. Tourists’ presences in these places are increasing every year. Attractions of this kind are looming threat to the nearby indigenous villagers. In the past, locals had seen how tourist influx coincided with the establishment of military camps.

Our ever expanding Milbus (Ayesha Siddiqa merged two words ‘military’ and ‘business’ to coin the term Milbus to define military’s business interest) sees possible profit making chances, acquires land, builds accommodation facilities, and the villagers are uprooted gradually, or in a single stroke — ethnocentric capitalistic aggression evicted them from their ancestral land. Many other places in the CHT are waiting to bear the same fate of Nilgiri, Sajek, Bogalak and more. Many roads are also under construction which will facilitate more tourists, more deforestation and more land encroachments.

On November 8, in Bandarban, Mro villagers protested against a plan to build five-star hotel on their land. The R & R Holding Ltd, a concern of Sikder Group, signed a MoU with Bangladesh Army’s Engineering Core Batallion to implement the project. The protest included a five days ultimatum in order to crank down the project. A voice of the unheard, a promising young leader — Reng Young Mro — came forth to deliver a speech before the crowd that moved many in social media. In his public address, he said ‘Here in Chimbuk, there is no single primary school, not even a government high school. How you preach development here, how you say that you are undertaking development for the Mro; for the development of Mro you are building hotel. If any Mro people go and grab your land, if we go to your place and say — this is our tourist spot, how would you feel, ask yourself by placing your hand on your chest. The day you find the answer to this question, you will understand our question.’

It did sound like an emancipatory proclamation, carefully chosen words put together to mean greater things. But, history says the state never stops carrying out its agenda as Arundhati Roy aptly put it for India: ‘……..its another big weapon is its ability to wait. To roll with the punches. To wear out the opposition. The state never tires, never ages, never needs a rest. It turns an endless relay. But fighting people tire. They fall ill, they grow old. Even the young age prematurely.’

Against the state’s constant act of tiring out the effect, rises the voice of Reng Young. He is not the last, nor is the protest. The show must go on.

Ridwanul Haque is interested in political economy and cultural anthropology.