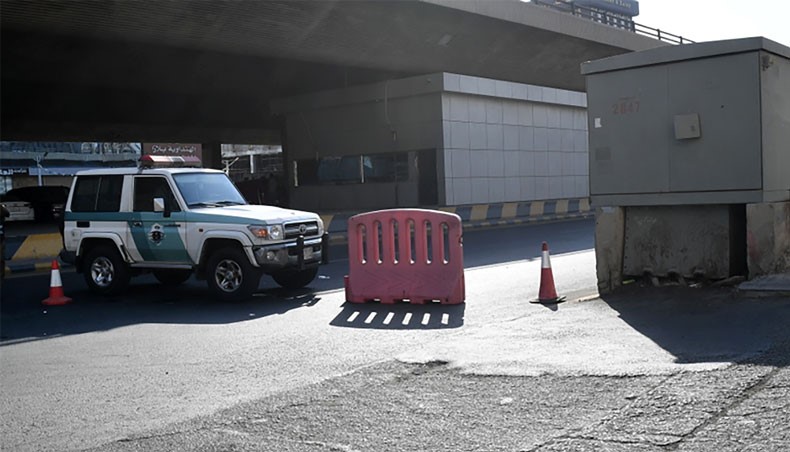 Saudi police close a street leading to a non-Muslim cemetery in the Saudi city of Jeddah where a bomb struck a World War I commemoration attended by European diplomats on November 11, 2020 leaving several people wounded amid Muslim anger over French cartoons. — AFP photo

Saudi Crown Prince Mohammed bin Salman pledged on Thursday to strike extremists with an ‘iron fist’, after a bombing against a gathering of Western diplomats was claimed by the Islamic State group.

The bomb blast struck a World War I commemoration at a non-Muslim cemetery in Jeddah on Wednesday, just two weeks after a guard at the French consulate in the Red Sea city was wounded by a knife-wielding Saudi citizen.

The attacks, which underscore Muslim fury over French satirical cartoons of the Prophet Mohammed, come as Saudi Arabia prepares for the G20 leaders’ summit later this month – the first to be hosted by an Arab nation.

‘We will continue to confront any extremist…behaviour and ideas,’ Prince Mohammed said in an address to the Shura Council, the top government advisory body.

‘We will continue to strike with an iron fist against all those who want to harm our security and stability,’ he said, according to the transcript of his speech published by the official Saudi Press Agency.

Prince Mohammed, the kingdom’s de facto ruler, warned those seeking to carry out jihadist acts of a ‘painful and severe punishment’.

Wednesday’s attack in Jeddah left at least two people wounded, including a Greek policeman and a Saudi official.

A British citizen was also believed to have been wounded.

The Islamic State group on Thursday claimed responsibility for the bombing, saying it was to protest the cartoons printed by the satirical French magazine Charlie Hebdo.

A statement by IS’s propaganda arm Amaq said that the attack ‘primarily targeted the French consul’.

The group offered no evidence of its involvement.

In a separate incident on Thursday, Dutch police arrested a man after multiple shots were fired at the Saudi embassy in The Hague, causing damage but no injuries.

It was not clear whether the incident, which the Saudi government condemned as ‘cowardly’, was linked to the attacks in the kingdom.

The French embassy in Riyadh, meanwhile, had urged its nationals in Saudi Arabia to exercise ‘extreme vigilance’.

The warning followed an attack at the Jeddah consulate on October 29, the same day a knife-wielding man killed three people at a church in Nice in southern France.

French president Emmanuel Macron had vigorously defended the right to publish cartoons, but he had also tried to assuage Muslim fury over his remarks.

Macron’s stance had prompted protests in several countries at which portraits of France’s president were burnt, and a campaign to boycott French products.

Saudi Arabia — home to Islam’s holiest sites — had criticised the cartoons, saying it rejected ‘any attempt to link Islam and terrorism’.

In his speech, Prince Mohammed said that he hoped‘the world will stop attacking religious symbols under the slogan of freedom of expression’ as that created a ‘fertile environment for extremism and terrorism’.

Saudi Arabia, long accused of exporting its ultra-conservative Wahhabist Sunni doctrine around the world, was itself a victim of domestic terror attacks.

Prince Mohammed, who pledged in 2017 to return Saudi Arabia to an ‘open, moderate Islam’, had sought to roll back the influence of the ultra-conservative religious establishment.

‘Extremism is no longer tolerated in the kingdom of Saudi Arabia,’ Prince Mohammed said in his speech.

The heir to the Saudi throne had curbed the influence of the once-powerful religious police, as he permitted mixed-gender music concerts, cinemas, and other entertainment options that appealed to a majority young population.

But simultaneously, the prince had launched a sweeping crackdown on dissent and free speech, arresting women activists, clerics, and journalists as well as royal family members.

Saudi Arabia was also grappling with a sharp coronavirus-led economic downturn, which had triggered unpopular austerity measures, including the tripling of its value added tax and the suspension of a monthly allowance to state employees.