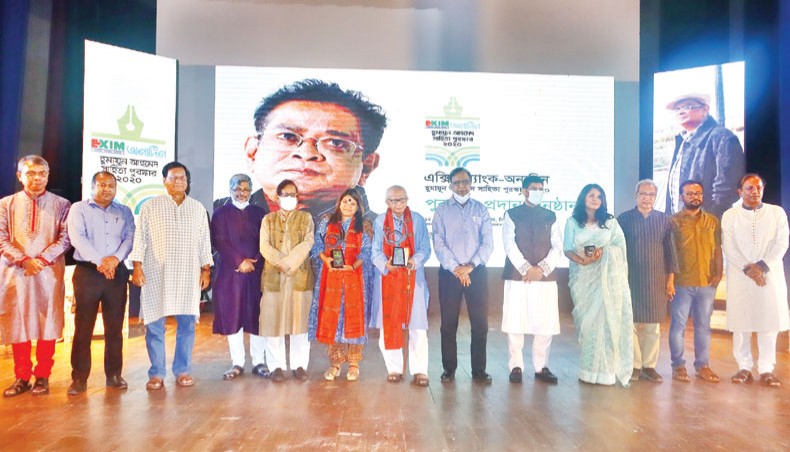 Organisers along with guests and award recipients pose for a photo at the awards ceremony for EXIM Bank-Anyadin Humayun Ahmed Literary Award 2020 at Abdul Karim Sahitya Bisharad Auditorium of Bangla Academy on Thursday.— Sourav Lasker.

Today is the 72nd anniversary of birth of the late acclaimed novelist-dramatist-filmmaker Humayun Ahmed.

Humayun Ahmed was born in 1948. After obtaining his Master’s degree, he joined Bangladesh Agricultural University as a lecturer in 1972. Though he officially trained as a chemist, Ahmed found his true calling as a writer.

He wrote about 200 works of fiction, eight of which were made into films. He also penned and directed many popular teleplays, drama series and films. He died from colorectal cancer at the age of 63 at a hospital in New York on July 19, 2012.

Humayun Ahmed was recalled at a programme held at Abdul Karim Sahitya Bisharad Auditorium of Bangla Academy on Thursday.

The award, an initiative of Anyadin and EXIM Bank, is awarded to two writers every year on the eve of Humayun Ahmed’s birthday.

‘Humayun Ahmed always tried to bring out the good side of an antagonist. He believed that good exists in every person. Humayun Ahmed made many popular teleplays and drama series among which Oyomoy, Bahubrihi, Kothao Keu Nei and Nandailer Younus, received huge response from the audience,’ said KM Khalid.

‘I feel very fortunate to have had the opportunity of working with Humayun Ahmed. He always contacted me regarding acting. He always got upset whenever I turned an offer down. When I joined politics, he became angry with me. His works will continue to entertain people for years to come,’ said Asaduzzaman Noor.

Besides, Himu Paribahan, a Facebook-based platform of Humayun Ahmed’s fans, will organise a two-day programme.

Members of Himu Paribahan will cut a cake in the morning. Ten members of the organisation will hold cancer and COVID-19 awareness processions at TSC, Suhrawardy Udyan, Ramna Park and Dhanmondi Lake in the capital. The organisation will also stream a live music show featuring Humayun Ahmed’s songs at 10:00pm on its Facebook page.

Himu Paribahan will stream a live discussion programme on its Facebook page on Saturday.

Young writer and journalist Hasan Shawon’s first book ‘Humayunke Niye’ will be published today. Humayun Ahmed’s brother cartoonist Ahsan Habib has designed the cover and wrote the introduction for the book, which will be published under the banner of Avayaa Limited.