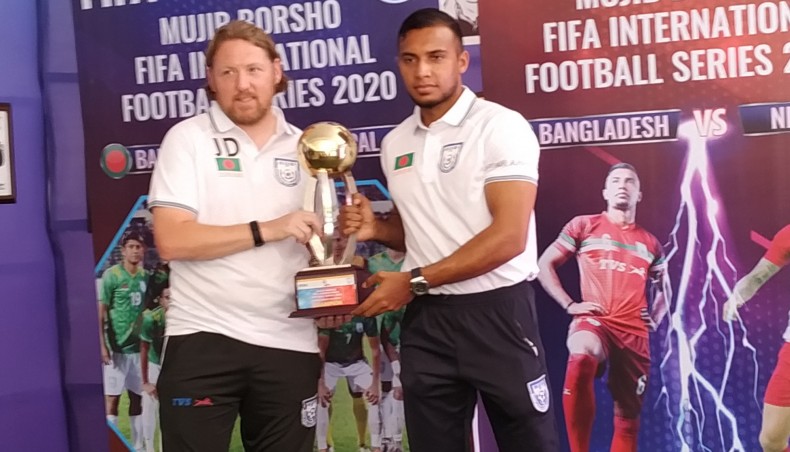 Bangladesh will take on Nepal in their first friendly game of the two-match Mujib Borsho FIFA International Football Series today.

The match will kickoff at 5:00pm at the Bangabandhu National Stadium in Dhaka and BTV will live telecast the match.

This will Bangladesh’s first international match in almost a year, with their last international fixture being against Oman in a 1-4 defeat in a first leg match of the 2022 FIFA World Cup and 2023 AFC Asian Cup joint qualifiers back in November 14, 2019.

Bangladesh head coach Jamie Day said that he wanted his charges to win on their return to football but that wasn’t the only thing in his mind.

‘We want to win, but my focus is not only about winning. I’ll be happy if we play well in all the games,’ Day said at the pre-match press conference at the Bangladesh Football Federation House on Thursday.

Bangladesh players have not taken part in any competitive matches since March due to the coronavirus outbreak.

Day felt that both team’s players were faced with an uphill to return to their best but had faith that his charges will mark their comeback to football with a win.

‘It’s obviously a short space of time but it’s the same for both team… it’s going to be a tough game…We [coaches] just have to make sure they [players] are prepared and injury-free,’ the Englishman said.

‘Obviously they [Nepal] are a very good team…They are going to be tough to break down…but we are looking forward to play, win and bring back football after a long time,’ he added.

Bangladesh has been dominant in both sides’ previous matches, winning 12 times against six losses and one draw, but Nepal has won the previous two encounters between the sides’.

‘In terms of preparation and challenges, I think both teams are almost at the same position…We have done consistently well against Bangladesh in recent games, I want to see the same in tomorrow's [today] game,’ said Maharajan.

Nepal captain and goalkeeper Kiran Chemjong expected a close a match but hoped to come out on top.

‘It will not be easy. They are a good team and so are we. We are ready as a team to give our best tomorrow [today],’ said Kiran.

Bangladesh skipper Jamal Bhuiyan, on the other hand, was keen to get back to winning ways against Nepal.

‘We are not 100 per cent yet but we have been practicing last for the three weeks; so hopefully we will win the match… We lost to Nepal in the last two games so it is in my head and I want to win the match.’

Spectators will be allowed to enter the venue as BFF has allotted 8,000 tickets, one-third of the venue’s total capacity to maintain social distancing, and fixed the gallery ticket price at Tk 100 and VIP ticket at Tk 500.