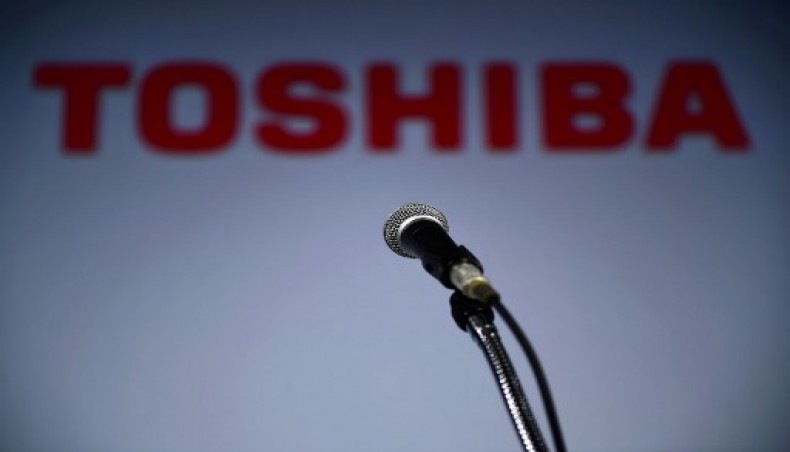 This file photo taken on November 8, 2018 shows a microphone set in front of a logo of Toshiba prior to the company's press conference in Tokyo.-AFP photo

‘We still have ongoing projects, but we have decided to withdraw from building new coal-powered plants,’ company spokeswoman Yoko Takagi told AFP.

Toshiba, which currently has around 10 coal-fired station projects under way worldwide, is a major global player in the power sector.

The company will instead increase investment in renewable energy, including parts for offshore wind-power facilities and research and development for next-generation solar batteries, the spokeswoman said.

The announcement comes after Japan's Prime Minister Yoshihide Suga set a 2050 deadline for the world's third-largest economy to become carbon-neutral.

His announcement two weeks ago firmed up the country's previous climate change commitments as it plays catch-up with pledges made by other major economies.

‘Society is moving towards carbon-neutral power,’ the Toshiba spokeswoman said, noting the firm has also set its own goal of slashing greenhouse gas emissions by 80 percent by 2050.

Germany's Siemens Energy and General Electric of the US have both made similar commitments to withdraw from coal-fired power stations.

Japan, which is a signatory to the Paris climate change agreement, was the sixth-biggest contributor to global greenhouse emissions in 2017, according to the International Energy Agency.

It has struggled to cut carbon emissions after shutting down reactors after the 2011 meltdown at the Fukushima nuclear power plant.

Reliance on fossil fuels like coal increased after that, as public anger over the accident pushed all of the country's reactors offline temporarily.

Coal is the second-biggest power-generation method behind LNG-fired plants, which provide 38 per cent of the nation's needs.