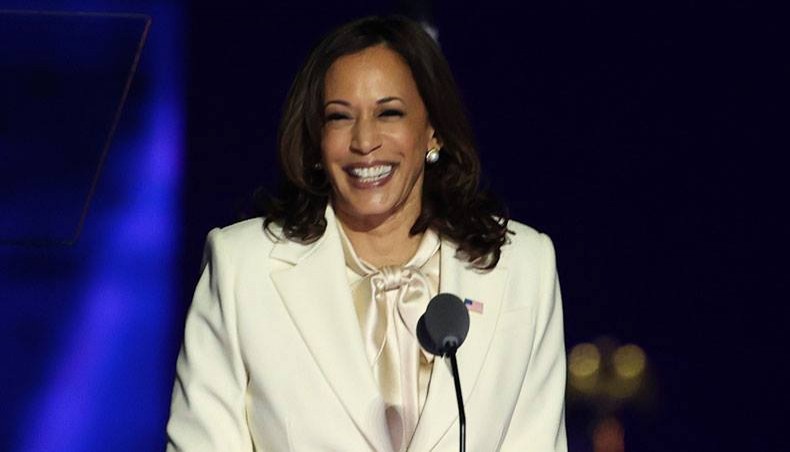 Vice-president-elect Kamala Harris delivers remarks in Wilmington, Delaware, on November 7, 2020, after being declared the winner of the presidential election. — AFP photo

The first female vice-president, and a symbol of American diversity – Kamala Harris had electrified many women and minority voters on the US left, who viewed her as the future more than Joe Biden.

As celebrations rolled on in major cities, excitement for some had shifted from Biden’s election victory to his running mate.

‘Kamala represents the future, and it makes me so proud that after everything that was done and said, we have an African-American woman in the White House,’Egbuchulam said, adding, ‘It tells young girls and boys that America looks more like us than just a typical white male.’

At 56, Harris brought new energy to the future administration of Biden, who at 77 was the oldest elected president. But her victory was even sweeter for the women who watched four years ago as Hillary Clinton suffered a shocking defeat to Donald Trump.

‘We never had a woman in power like this. It’s amazing,’ said Devi Kowlessar, a New York real estate agent who was Indian-American, like Harris.

‘‘Madame Vice President’ is no longer a fictional character,’ tweeted actress Julia Louis-Dreyfus, who played the role in the acclaimed comedy series ‘Veep.’

For her victory speech on Saturday night, Harris wore a white suit in tribute to the suffragettes who fought 100 years ago to win American women the right to vote.

The California native invoked the memory of her Indian mother, who died of cancer in 2009, and hailed ‘the generations of women, black women, Asian, white, Latina, Native American women who throughout our nation’s history have paved the way for this moment tonight.’

‘I still can’t believe it, that we’ll have somebody in the White House that looks like me,’ said Robin Brown, the head of a New York NGO that helps pro-choice Democratic female candidates get elected.

But Harris was a polarizing figure on the campaign trail: branded a ‘monster’ by Trump, many voices on the left also criticised Biden’s vice-presidential pick.

Some people, such as the former spokeswoman for Senator Bernie Sanders’s campaign, Briahna Joy Gray, saw Harris as a ‘cop’– guilty, according to them, of having made oppressive political choices when she was district attorney of San Francisco during 2004-2011 that hit minority communities particularly hard.

For Kelly Dittmar, the director of research at the Centre for American Women and Politics at Rutgers University, Harris brought ‘the perspective and lived experiences of a Black and South Asian woman who has lived her life in the United States.’

That, to her, was the power of ‘representation’: ‘It brings diverse perspectives to the table that makes for better and more inclusive decision-making.’

Harris brought ‘a certain level of excitement and enthusiasm that helped the campaign’ mobilise female Democratic voters, according to Dittmar.

Harris’s nomination also reassured people concerned about ‘regression, that we were going back to an all-white male…vision or image of leadership’ with the choice between Biden and Trump, both of whom are in their seventies, the academic added.

In her speech on Saturday in Wilmington, Delaware, Harris promised,‘While I may be the first woman in this office, I will not be the last.’

For Vera Green, a 29-year-old management consultant in New York, ‘the glass ceiling is broken.

‘It’s so deeply personal, I think, for every woman everywhere,’ she said, adding,‘It’s a huge step for women.’