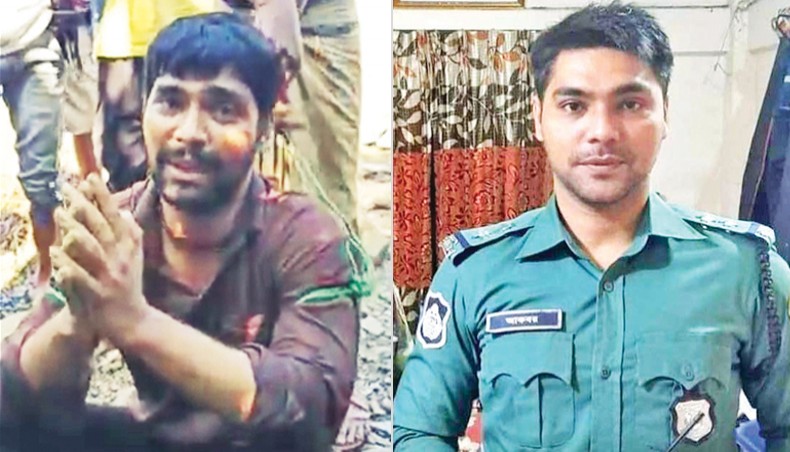 Suspended police sub-inspector Akbar Hossain Bhuiyan, the prime suspect in torturing Raihan Ahmed to death at the Bandar Bazar outpost under the Kotwali police station in Sylhet, was arrested at Kanaighat border on Monday, nearly a month after he went into hiding.

The police officially in a press briefing claimed that Akbar was arrested in the bordering area while trying to flee to neighbouring India.

‘We had a tip-off that Akbar might try to cross the Kanaighat border and a team of plainclothes police members were deployed there from Sunday night, said Sylhet police superintendent Mohammad Farid Uddin at the briefing at his officer in the evening.

Meanwhile, two pieces of video footage went viral on social media in which Akbar was seen being tied and questioned by some local people.

In the face of questioning, Akbar claimed in the video that he did not kill Raihan, rather he died during the remand.

Asked about his escape after he was suspended, Akbar said that a senior officer told him that he might get arrested since the situation was serious.

Things might get normal in two months and if he returned then, it would be easy to handle the death, the officer added.

Sylhet metropolitan police commissioner Nisharul Islam told New Age that the suspended SI was detained by locals in a Khasiya Palli in India and was handed over to the Bangladeshi police at Kanaighat border of Sylhet.

However, asked about the claim of handing Akbar over from India, SP Farid told reporters that Akbar was arrested under the supervision of the district police and some trusted friends of the police helped in the operation.

‘We did not arrest Akbar from Indian territory, nor the Border Security Force of India handed him over to us,’ he said.

Replying to another query, Farid said that they were not aware whether Akbar had gone to India after he escaped from his workplace ‘He might have gone to India and later might have returned. We have no confirmed information yet,’ the SP said, adding that the police would now interrogate him to know the information.

The police officer said that they would hand over Akbar to the Police Bureau of Investigation, the entity charged with investigating the Raihan murder case.

Raihan’s mother Salma Begum expressed her satisfaction after receiving the news of the arrest of Akbar in the afternoon.

‘We demand capital punishment for Akbar and all of his associates for the brutal killing of my son in police custody,’ she told New Age.

Sylhet range police deputy inspect general Mafiz Uddin Ahmed said in the briefing that if it was found that any police officers had helped Akbar in fleeing his workplace, they would also be brought under trial.

Meanwhile, some border area residents in Kanaighat told New Age that Akbar was brought to the Dona border spot from Meghalaya of India on Monday morning and then the Kanaighat police arrested him.

‘The cattle traders informed the police over phone of SI Akbar and then the police rushed to the spot,’ Shamsul said.

Contacted, Border Guard Bangladesh Battalion 19 commanding officer lieutenant colonel Rafiqul Islam also told New Age that Rahim with the help of Indian Khasiya people held the fugitive and then he was brought back to Bangladeshi territory.

The police initially claimed that Raihan died of mass beating while he was trying to snatch money from a pedestrian but his family complained that he was tortured to death by police after they failed to realise Tk 10,000 from him in bribe.

His widow Tahmina Akter filed a case in this regard with the Kotwali police station on October 12.

In the face of protests across the country, the Sylhet Metropolitan Police suspended Akbar, constable Harunur Rashid, Tauhid Mia and Titu Chandra Das on the day for their involvement in torturing Raihan.

Besides, the SMP withdrew assistant sub-inspectors Ashek Elahi and Kutub Ali and constable Sajib Hossain from the outpost.

But, Akbar managed to flee his workplace immediately after the issuance of the suspension order.

The Police Bureau of Investigation, which is charged with the investigation into the murder, so far has arrested ASI Ashek, constable Harunur and Titu in the case over the death.

The SMP also suspended another sub-inspector Hasan Uddin on charge of assisting Akbar in fleeing.

After Akbar fled allegations of his having illegal wealth started to surface.

Akbar from Ashuganj of Brahmanbaria joined the police in 2007 as a constable and was prompted to SI in 2014.

There are allegations that he amassed huge wealth with illegal income and built a luxurious house in his village of Ashuganj upazila.

A police headquarters probe has also found evidence of torture by suspended sub-inspector Akbar Hossain Bhuiyan that led to the death of Raihan Ahmed at the Bandar Bazar police outpost under the Kotwali police station in Sylher on October 11.

A senior police officer, preferring anonymity, said that the probe identified negligence of 10 to12 officers — sub-inspector and upwards — which allowed SI Akbar, the prime suspect in the case over the death from torture, to flee.