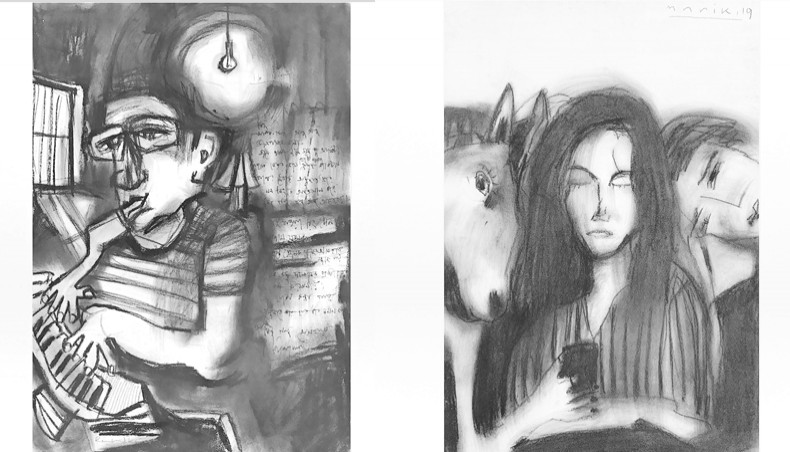 Rashid Khan is simultaneously a visual painter, soloist, bard and wordsmith. He has always tried to keep his individual hallmark in every domain of his creativities. This is possible due to his acute seriousness and honesty towards his works.

Rashid has acquired an enigmatic quality in his paintings that works on many levels from the visual to the subconscious. The figures have been promptly drawn and their facial expressions carry miscellaneous moods.

His ponderings on art delineate a vast range of themes from reality to fantasy, imagination to imperfection, and sometimes the artist delves deep into a psychological voyage through his surrounding characters. The artist loans some characters of his art pieces from fiction which he read or sometimes from his imaginative world.

His solo exhibition, titled Charcoal Stories, commenced at 49th Studio in Banani on Wednesday. The show is quite unique because all the works are based on charcoal medium on paper and canvas.

It is very noticeable that the painter has massively used charcoal on paper that is undoubtedly complicated to handle. Spraying of fixative has to be adequate enough to give the charcoal a bright and animated look and Rashid has done this dexterously. The artist likes to experiment with bold lines and he has a great ability to bring an appealing view to his works where one can get a taste of aestheticism.

The medium of charcoal’s individual trait is boldness, courageousness and impressiveness. It is much darker than any pencil and has a sense of lavishness where one can get a touch of liberty. This is also a flexible medium for Rashid, because the medium helps him provide an artistic sensation about his characters’ sensibilities, articulations and gestures splendidly.

Charcoal sticks particularly allow him to focus on large shapes and accurate contours because of their blunt ends. The width of his sticks of charcoal varies considerably, with fine points being used for subtle details of faces, in contrast with the comprehensive strokes which he has used to foreground his desired subjects. The painter has achieved mastery in capturing the quality of light in his charcoal-based paintings.

At the show, Rashid has cerebrally projected nude and semi-nude seated figures and women in diverse articulations. He has made a great attempt to analyse the characters and then he poured his emotions, sensations and affections into their depictions.

It can be surmised that Rashid has been enthusiastically studying movements of figures and arrangements of compositions for a long time. In this sense, the artist is very cautious about his compositions and arrangements of figures. Consequently, the artist has meticulously drawn the front side of the figures, backgrounds of which are sometimes black and at times white. His spontaneous lines capture the soberness, muteness and overall insights of his portraits’ traits. His portraits are also symbolic of contemporary times — harsh realities, fantasies and social as well as individual dilemmas of the post-modern era.

The exhibition will end on November 20.