The French crisis is self-made 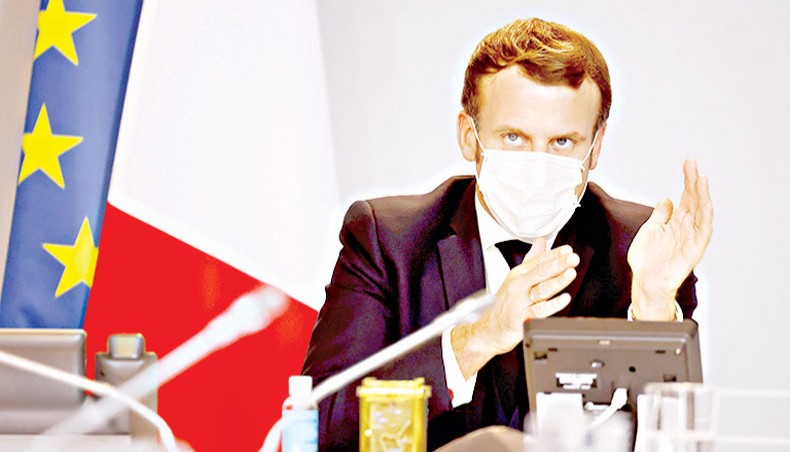 FRANCE is in a crisis or so it seems from the latest reports in the media. For the last couple of weeks, the secular fundamentalist state has been in a state of alert since the beheading of a middle-school teacher in a Paris suburb by an 18-year-old attacker who was apparently angry with the teacher showing a cartoon of the Prophet Mohammad (SM) in class. On October 29, a Tunisian man was shot and arrested by police after he had killed three people in a church in the French city of Nice.

President Emmanuel Macron said that France would deploy thousands more soldiers to protect important sites such as places of worship and schools. Speaking outside the church, Macron said that France had been attacked ‘over our values, for our taste for freedom, for the ability on our soil to have freedom of belief… And I say it with great clarity again today: We will not give any ground.’

Macron talks about values which is a very subjective term. French values, he espouses, are not the ethical and moral standards that are respected and/or lived by billions of people in our planet. His ‘French values’ allowed him to live a life of fornication since his middle school days at a Jesuit institute Lycée la Providence in Amiens where he got infatuated with a married school teacher Brigitte Auzière (who was 24 years older than him). They lived together as a couple since 1995 when he was 18; Brigitte, married with three children at Jésuites de la Providence where Emmanuel studied, likewise did not have problem living a life that even many French people do not appreciate.

Apparently, however, Emmanuel’s parents were not too happy about those ‘French values’ espoused by their teenage son and were alarmed at the bond he had formed with Brigitte Auzière, a married woman who was in her forties then. They tried to separate the couple and sent him off to Paris for higher studies. As a mediocre student, Emmanuel, however, failed twice to gain entry to the prestigious École normale supérieure. He then went onto studying philosophy and earning a DEA degree, a master’s level degree, with a thesis on Machiavelli and Hegel at Nanterre. Soon after his graduation, Emmanuel started living again with Brigitte. Eventually, Brigitte divorced her husband André-Louis Auzière in January 2006 and married Macron in October 2007.

Although raised in a non-religious family, Macron was baptised a Roman Catholic by his own request at age 12; he is alleged to be an agnostic today.

This above background is necessary to understand today’s France and its ‘civilising’ mission of promoting the slogan of ‘Liberty, Equality and Fraternity’, something that can be traced back to the days of the French Revolution (1789–99). France has been on its ‘civilising’ mission since the days of Napoleon Bonaparte. Its ‘civilisation’ was built on plunder of foreign territories in which process it killed millions (a vast majority being Muslims) that were different than its own. Under the slogan of liberty, it stole freedom from tens of millions of people whom it colonised in some of the most brutal forms that were known to mankind. Those colonised were treated as the ‘unequal’ and ‘un-fraternal’ people who could only be exploited and killed mercilessly, if deemed unapproving of the ‘French way’.

Thanks to decades-long independence struggle movements, while those former French colonies have earned their political freedom in the latter half of the 20th century, the civilising mission of France to ‘liberating’ their mind still continues. And what a better venue now than its own backyard to force-feed the tablets of its ‘values’ amongst the millions of grandchildren of the once colonised people.

Under the name of liberty, it has embraced immorality and given licence to it. As much as the French ‘values’, exemplified by president Emmanuel Macron and his wife Brigitte Macron, do not draw respectability from the ‘civilised’ world so are the lives of an average French John/Jane living inside the country that has very little to excite the outsiders with those hollow values. If Madame Roland were alive today, she would have probably shouted, ‘O liberty! What crimes are committed in thy name!’

Hypocrisy and double standards have been at the heart of the French experiment since day 1. The French Revolution got rid of the old royalty only to be supplanted by a new one with Napoleon at the helm of the affairs. There was nothing egalitarian and proletariat in the attitude and mannerism of those who came later to rule the country.

France is a secular state on the basis of the 1905 French law on the Separation of the Churches and the State. However, the government continues to finance Christian churches. After Notre Dame Cathedral caught fire, Emmanuel Macron pledged to rebuild the Cathedral ‘even more beautifully.’ Macron said he wanted to see the renovation of the beloved Roman Catholic architectural landmark completed within five years. ‘We have so much to rebuild’, Macron said in a televised address to the nation. ‘We will rebuild Notre Dame Cathedral even more beautifully. We can do it, and once again, we will mobilise (to do so).’

Contrast that attitude with Macron’s war on masjid (mosques). At least 73 mosques and Islamic private schools across France have been closed by authorities this year.

To deflect the crisis, esp. his inability to find the root cause and change the faulty policies that promote bigotry, Macron has tried to make the French crisis an Islamic one. We are not surprised! His government routinely tries to sell the wisdom behind secularism and liberty and yet has no qualms about prohibiting freedom or liberty of a French Muslim woman to wear niqab and hijab. She can be heavily censured for practising her liberty to don modestly.

In October, several French lawmakers walked out of the national assembly in protest at the presence of a student union representative who wore a Muslim veil, igniting a vitriolic debate. There was similar turmoil last year when a politician in Dijon asked a Muslim mother on a school trip to remove her hijab. In neither case were the women infringing on France’s secular laws.

More problematically, the French brand of secularism has been weaponised to sell xenophobia and intolerance of Muslims or Islamophobia. While Islam is a favourite topic of politicians and the media, Muslims seldom get to have their say.

So, we are not surprised to see the reactions and counter-reactions to the latest French crisis. It is the old hatching story once again: which came first — the chicken or the egg? If hatred against the most revered personality in Islam was not promoted in a government funded school in France, would Samuel Paty, the schoolteacher, be dead today? Are the provocateurs of hatred and intolerance any better than terrorists? Was Julius Streicher less of an evil than any of those who volunteered for the Gestapo?

Liberty does not give a license to abuse and demean anyone, much less a person of the stature of the Prophet (SM) of Islam who is revered and followed by billions of people. While the murder of a xenophobe is unacceptable, so is the liberty to insult and injure billions of people on earth.

Muslims, however, need not take violent action against those offenders, born either out of wedlock or ill-informed. Allah Himself has dignified their Prophet (SM) against such mocking of the mockers.

Civilisation is not about haughty claims about one’s values that are racist, arrogant, bullish and insulting, let alone hypocritical and hollow at the core, but about respect, dignity and empathy for fellow human beings and other creations. If such latter words are not in Macron’s French vocabulary, he ought to introduce and practice such to become relevant and avoid a similar crisis from brewing in France in the future. In the meantime, the civilised world should boycott goods made in France because, as we have seen with racist South Africa, that is the language that the racists, uncivilised bullies and arrogant ones understand.

A civilised culture promotes respect, tolerance and peace and prohibits practices and acts that generate hatred, violence and intolerance. It is not too late for France to wake up to the call of genuine civilisation by adopting and promoting universal values that define our humanity and let go of phony ‘values’ that are recipes for only disaster.