Maadari: the shallow truth about politics, governance system and corruption 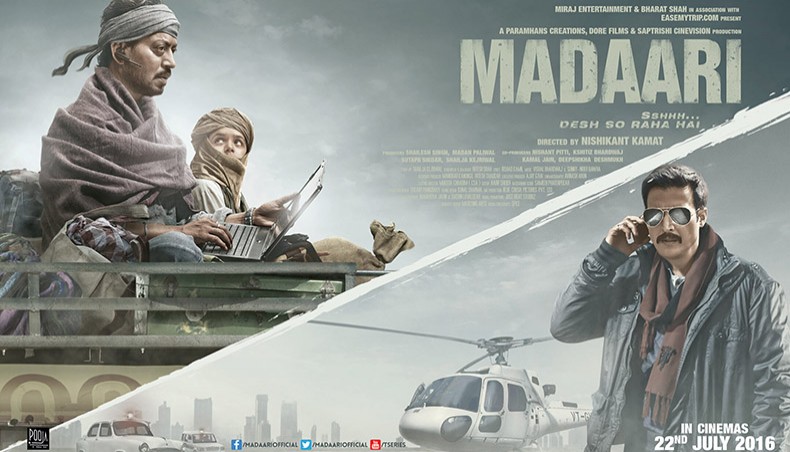 What happens to the family of a victim who died in an accident due to substandard government construction or systemic failure? They simply receive compensation. What if a single-father chooses to refuse that money and sets his mind in exposing the politicians and government officials responsible for the accident? This is the story line of Maadari (2016) directed by Nishikant Kamat. Md Talebur Islam Rupom reviews the movie

It is not true that government is corrupt. The truth is government exists solely for corruption.

THE dialogue, from the protagonist of the movie Maadari, can be a strong and unpleasant reality for people and the ruling system. Late actor Irrfan Khan starred Maadari (Puppeteer) is a Hindi movie which exposes the dark side of a corrupt government. Although the movie is based in India, it connects countries across the world on corruption and shadowy politics. It can be considered as an outspoken scenario of governance functions and its corruption in a cinematic way and by telling the truth to the people.

Nirmal Kumar (Irrfan Khan) is a middle-class techie who had a loving wife and was blessed with a boy, and life seems picture perfect. That is, until his wife leaves him and the child and went abroad.

Nirmal tries hard to prove his skills as a single parent, but sadly, his son meets with an accident when a demolishing bridge fell on him and he died. Soon after, Nirmal starts his journey against the political system to unveil the dark side of corruption.

He kidnaps the son of home minister Prashant (Tushar Dalvi) from his boarding school in Dehradun, and demands that the minister surrender. Rohan (Vishesh Bhansal), a seven-year-old played the son of India's home minister. The home minister appoints their best officer Nachiket Verma (Jimmy Shergil) to find Rohan but, in a secretive manner.

The kidnapper does not want any ransom, all he wants is to find out about a tragic incident which was the end result of a high-level corruption. This is how the series of parallel stories deals with the past life of the kidnapper, his association with Rohan followed by the cat and mouse chase with Nachiket and many more.

In the beginning, it shows how politicians influence media and other associates when someone from political cloud falls into danger. The team searching Rohan assumes that the kidnapper has mistaken his identity as he lives in a boarding school with his friend-Chiku. Then Nachiket tells his colleague, ‘People do not expect rulers to have commoners’ fate. They will stop respecting government. When commoners lose their child, they take it to be their fate and endure it. On contrary, when they find out that home minister’s son is abducted.’ Like this, every dialogue will steal the attention of the audience. Although it is two-and-a half-hour movie and will keep you glued to the screen till the very last frame.

As time keeps going, the kidnapper gives clues to the investigating team. Thereafter, the team looks for the incident that started all this. They find out that there are a lot of other tragedies due to poorer constructions. In fact, building substandard construction is very common in order to grab public money. It does not stop here.

When the substandard construction will be ruined after some time, there will be another chance to reconstruct again and earn more money. Then it is discovered that Nirmal’s son died under a low-quality governmental bridge. To show the condolence and consolation, Nirmal is offered to have the compensation of the lost lives alongside others. It is a normalised practice in real life too where governments pay some money to the victim’s family and get rid of legal complexities.

Perhaps, the shallowest truth is revealed when Nirmal forces his demands to be accepted by the government and gather the governmental officials responsible for the tragedy. Towards the climax too, Irrfan shows his prowess as an actor when he calls a bunch of politicians for a question-answer session to the existing corruptions.

The master actor’s scenes as a grieving father will leave you moist-eyed. It is revealed that any kind of construction done by government is built with substandard materials and poor executions in order to bag money and give shares to the politicians and party funds. In fact, this is the primary business of politicians.

Whether someone is in power or not, this strategy keeps going. Both ruling and opposition party share the public between them. For example, if government is an engineer, then the opposition party is a constructor. It happens in every sector. They share everything among themselves. Whatever they do in public, it is just scripted actions and a process of manipulate facts.

Common people are also responsible as there is no unity, rather differences and obstacles in the name of religion, class, caste et cetera. Lacks of unity among the mass public helps politicians to grip on them and to exploit them. Apparently, the movie comprehensively shows the actuality of the governmental system but in a simple language in order to give people exact food for thoughts and realisation.

Irrfan was an absolute master of his craft and had unmatchable acting prowess and epic delivery of dialogues, and it is proved in Madaari. His realistic acting perfectly portrays the agonies of a common man who is being gripped under the clutches of influential politicians and other structural pressures. It won’t be wrong to say that the late actor stole the entire show in terms of the fast-paced plot as well as the major actions of the movie.

The movie boasts a mind-blogging performance from Jimmy Shergill, another superb actor, who plays the role of a disciplined cop. The film’s supporting cast — Tushar playing the helpless father, Nitish Pandey playing the boisterous news show anchor and child actor Vishesh Bansal — do a splendid job and justice to their roles.

Vishesh especially does a great job, going from an aggressive captive to softening towards his kidnapper is soothing to watch. There is no doubt about this fact that the makers of Madaari had roped in a brilliant star cast. Almost every actor in the movie has wonderfully portrayed the assigned role in the movie.

Be it Jimmy Shergill who plays the role of a top enforcement officer Nachiket Verma or be it Vishesh Vandal who plays the role of the home minister’s son Rohan playing the Stockholm syndrome perfectly, everyone has played their parts well and that is what makes Madaari a must-watch to get a wake-up call to find out the darkest reality.

In the movie, a common man becomes a puppeteer to show how the power quarters have the privilege and eventually control the commoners and keep exploiting the mass.

Talebur Islam Rupam is a contributor with the New Age Youth.