Is there really no alternative? 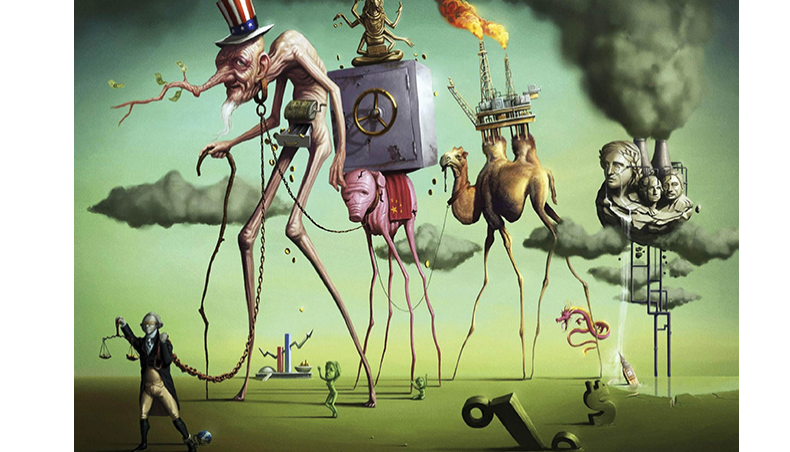 To break this deadlock of eternal present of capitalism, new imagination is imperative. Old school communism will not return. The ongoing pandemic has again exposed the crisis, failure and inhumanly cruel face of neoliberal capitalism. Once again it has become clear that this sadistic system is neither ready nor willing to protect the most vulnerable section of the population, writes Raihan Rahman

WHEN Mikhail Gorbachev handed over the nuclear launch codes to Boris Yeltsin and the Soviet flag was lowered for the very last time, history witnessed the dousing of a beacon of dream and optimism that was kindled on 07 November 1917. For decades, it was the October Revolution to which the wretched of the earth looked up for inspiration to dream of a future free from all exploitations and make a utopia of liberation, emancipation and mass-actualisation.

Of course, the Soviet Union and other communist regimes had their own flaws and faults and turned out to be the very monsters they wanted to obliterate (although many of my leftist friends decide to label this allegation as mere western propaganda). The communist bloc could not escape the collapse but as long as they existed, people could still think of an alternative to the oppressing reality of capitalism.

However, since the 90s, as the Soviet Union fell, the emancipatory dream of mass people began to get archived while capitalism has succeeded to establish itself as the only functioning system and has posited neoliberalism as the ubiquitous ideology of this unipolar world. The result is that now we live in a cerebral void where we can no longer envisage an alternative that could resist capitalism and its neoliberal phase.

The most possible apocalypse one can imagine today is the ecological one since the furor of the cold-war era nuclear catastrophe is somewhat died out nowadays. Many post-apocalyptic sci-fi Hollywood films have done a great job in presenting convincing and engrossing visuals of ecological dystopias but hardly any visual is found that envisions an alternative to the very system that could one day lead to such catastrophes.

At the beginning of this ongoing COVID-19 pandemic, a surge of hope seemed to overwhelm the people on the left. They thought that the virus that did not distinguish between the rich and the poor would inevitably make capitalism suffer, could even make it a relic of history.

Slavoj Žižek too, the celebrity leftist intellectual recognised the signs of a resurrection of communism, though not the old-school one. He anticipated that this pandemic would exacerbate the dominant modes of politics of today’s world — incompetent western barbarism and efficient eastern totalitarianism — and a highly reformed communism would spring from that ruin, redressing the mistakes of the past.

Žižek argued that a new normal will evolve where the existing market mechanisms will be transformed and a new kind of government and global organisation will come forth who will control and regulate the economy to replace capitalism.

Even though the conclusive optimism may sound a little bit naive, the premonition that the existing system may take a dystopian turn is not ill-founded. All the signs are scattered all around. A new array of crises will continue to hit capitalism and the periodic ones will keep on resurfacing. But the modern states will stick to bailing out the wealthy class with stimulating packages while the rest will suffer a sharp decline in living standards.

While there is no shortage of optimism on the left, a clear outline of any movement or charged activism to overthrow capitalism is blatantly absent. At the same time, whatever crisis befalls on capitalism or no matter how miserable human lives turn out to be, are people — from the working class to the middle class, the 99 per cent — who are suffering the most because of capitalism, thinking of any alternative? Are they dreaming of any emancipatory utopia? Or have they already surrendered taking this system for granted as a permanent settlement?

The commonsensical answers to these questions are known to all.

The first, capitalism wants to hide its past by erasing all signs of its violence and bloody past. The second, very cleverly it wants to maintain an idea of an eternal present.

In this construction of temporality, there is no space for the future. Jameson terms this stalemate as the ‘eternal virginity of the capitalist present’. The motive behind the construction of this historicality and temporality is singular — to resist the possibility of any alternative thinking in the public imagination. People can imagine an apocalyptic future but cannot think of any potential change of capitalism and its associated production processes and market logic. As if this system is destined to continue as long as time exists — forever and after.

Capitalism is quite successful in this strategy, particularly its neoliberal phase. While maintaining the structural inequality and exploitation, neoliberalism is passing quite an unimpeded and almost resistance-free journey. Moreover, it has succeeded in masking its monstrous face from the public eyes. It shrewdly obscures capitalism’s essential reality.

Neoliberal ideology has established itself as the social commonsense and collective wisdom which are being assimilated and reproduced in everyday life. Competition has become the representing trait of human relations and citizens have turned out as mere consumers. The senseless pursuit of money and the monetisation of every personal and social relation has been normalised in the society.

However, this neoliberal logic is not being consciously perceived in the public imagination, not being captured patently. Its anonymous ubiquity and pervasive penetration in every sphere of life have made it hard to recognise it as an ideology.  Keeping itself in shadowy anonymity, it has planted the belief ‘there is no alternative’ deep inside people’s mind. Columnist George Monbiot rightly says, ‘Its anonymity is both a symptom and cause of power.’

But what is the way out? The assault of neoliberalism remains strong and unanswerable in the absence of any dynamic left opposition. Besides it is not enough to oppose a system, a coherent and viable alternative must be devised and proposed which will gain public support and bring people together.

To break this deadlock of eternal present of capitalism, new imagination is imperative. Old school communism will not return. That communism is now synonymous with authoritarianism and the accusation is not unfair. The iron fist ruling of the iron curtain countries has made people skeptical about it. The return of that kind of communism would be staged as a farce just as Marx joked about the repetition of history.

French philosopher Alain Badiou calls for new fiction, a fresh imagination. Recently demised anarchist author and activist David Graeber used to emphasise new imagination for a radically emancipatory world. Badiou thinks that the greatest crisis of today’s world is that there is no great fiction supporting a great belief.

The ongoing pandemic has again exposed the crisis, failure and inhumanly cruel face of neoliberal capitalism. Once again it has become clear that this sadistic system is neither ready nor willing to protect the most vulnerable section of the population. Rather the fact that they are vulnerable itself is the structural consequence of this system.

The system that creates and maintains structural inequality and unequal power relations is never a successful system, let alone an ideal one. That’s why an alternative must be imagined. The 99 per cent must break the existing temporality of the eternal present and think of a possible future where neoliberal capitalism will truly become a historical relic.

Raihan Rahman is a young writer and critic.