Biden on cusp of winning 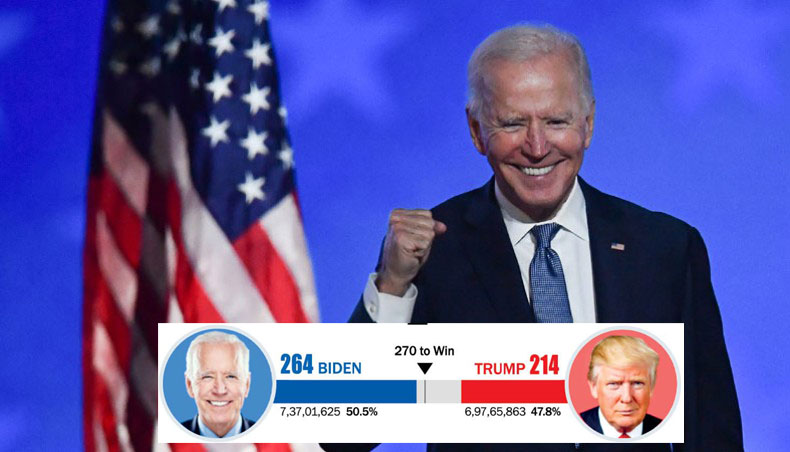 Democrat Joe Biden was on the brink of winning the White House on Friday after taking the lead in the potentially decisive state of Pennsylvania but president Donald Trump showed no signs of being ready to concede and his campaign insisted the bitterly contested race is ‘not over.’

Pennsylvania, and its 20 electoral votes, would be enough to vault the 77-year-old Biden past the magic number of 270 votes in the Electoral College, which determines the presidency.

With tens of thousands of votes remaining to be counted in Pennsylvania, many from heavily Democratic areas, Biden opened up a 9,000-vote lead over the Republican incumbent, according to real-time state election results.

Biden currently has at least 253 electoral votes and is leading in three other states — Arizona, Georgia and Nevada — where ballots from Tuesday’s bitterly contested election continue to be counted.

Some US media, however, reported that Biden had 264 electoral votes as they called Arizona for the former vice-president although the race was still close.

House speaker Nancy Pelosi, the top Democrat in Congress, welcomed what she called the ‘strong mandate’ given to ‘president-elect Biden.’ It is ‘a happy day for our country. Joe Biden is a unifier, because he is determined to bring people together,’ Pelosi said.

While his reelection hopes may be fading, Trump is making it clear that he is not ready to accept defeat, launching unsubstantiated claims of voter fraud during an extraordinary White House appearance on Thursday and claiming that he had actually won.

‘This election is not over,’ the Trump campaign’s general counsel Matt Morgan said after news of Biden’s lead in Pennsylvania broke.

‘The false projection of Joe Biden as the winner is based on results in four states that are far from final,’ Morgan said in a statement.

‘Biden is relying on these states for his phony claim on the White House, but once the election is final, President Trump will be re-elected.’

Morgan alleged that there had been ‘improperly cast’ ballots in Georgia, where a recount was expected, and Nevada and claimed Republican vote-counting observers had been denied access in Pennsylvania.

The Biden campaign fired back at the Trump campaign’s refusal to admit defeat with a statement tinged with sarcasm.

‘As we said on July 19th, the American people will decide this election,’ it said. ‘And the United States government is perfectly capable of escorting trespassers out of the White House.’

With a Biden victory looking increasingly likely,  the US Secret Service increased its protective bubble around the former vice president, sending an extra squad of agents to his campaign headquarters in Wilmington, Delaware, The Washington Post reported Friday.

At the White House on Thursday, Trump spent nearly 17 minutes making incendiary statements about the country’s democratic process of a sort never before heard from a US president.

According to Trump, Democrats were using ‘illegal votes’ to ‘steal the election.’

‘If you count the legal votes, I easily win,’ he claimed. ‘They’re trying to rig an election. And we can’t let that happen.’

With Trump refusing to concede defeat, there were growing concerns of the potential for unrest in the increasingly tense nation and attention was focused on the reaction of members of his Republican Party.

Several prominent Republicans rallied behind the president and signalled they could challenge the legitimacy of the results if he loses.

‘I think everything should be on the table,’ senator Lindsey Graham said when asked by Fox News host and Trump loyalist Sean Hannity if Pennsylvania’s Republican-led legislature should refuse to certify results.

‘Philadelphia elections are crooked as a snake,’ Graham said.

Another Trump ally, senator Ted Cruz, told Hannity: ‘I’ll tell you the president is angry and I’m angry and the voters ought to be angry.’

‘The president’s allegations of large-scale fraud and theft of the election are just not substantiated. I’m not aware of any significant wrongdoing here,’ Republican senator Pat Toomey of Pennsylvania told the ‘Today’ show.

Trump’s former national security advisor John Bolton, who wrote a book critical of the president after leaving the administration, tweeted that Republicans ‘are facing a character test.’

‘All candidates are entitled to pursue appropriate election-law remedies if they have evidence supporting their claims,’ Bolton said. ‘They should certainly not lie.’

‘Here’s how this must work in our great country: Every legal vote should be counted,’ McConnell said. ‘Any illegally-submitted ballots must not.

‘All sides must get to observe the process. And the courts are here to apply the laws & resolve disputes. That’s how Americans’ votes decide the result.’

Much of the Trump campaign’s ire has been focused on the huge number of mail-in ballots this year, which were not counted in Pennsylvania until after Election Day and have swung the vote there in Biden’s favour.

Mail-in ballots have tended to tilt heavily to Democrats, who used them more than Republicans out of fear of risking exposure to Covid-19 in crowded polling stations.

Besides Pennsylvania, Biden has also pulled ahead of Trump in the once reliably Republican state of Georgia, taking a lead of about 1,500 votes.

Wins in Arizona, Georgia, Nevada and Pennsylvania would give Biden 306 of the 538 Electoral College votes — the exact number won by Trump in his upset victory over Hillary Clinton.

The Trump campaign has filed a slew of lawsuits in battleground states challenging the results which the Biden campaign has dismissed as ‘meritless.’

Outside an election office in Phoenix, Arizona, far-right conspiracy theorist Alex Jones roused a heavily armed crowd, shouting on a megaphone about Trump’s supposed enemies: ‘They will be destroyed because America is rising.’

US VOTE LEADS IN KEY STATES

*Some US media, including Associated Press, called Arizona for Biden taking the total electoral votes to 264 while others like New York Times are yet to call the race.
Till 11.45pm (BST) Fiday