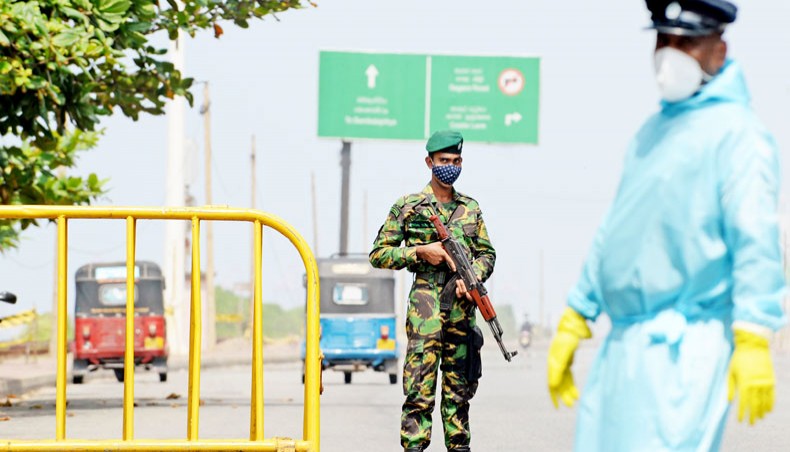 Security personnel guard a road checkpoint in Colombo on November 2  following a one-week curfew extension for the Western province to contain the spread of the coronavirus. — Agence France-Presse/Lakruwan Wanniarachchi

THE rapid spread of the coronavirus has become the focus of national attention. The extension of the three-day lockdown and 24-hour curfew that was imposed on Colombo and the entire Western Province over the weekend has now been extended by a week with the implication that the threat of uncontrolled spread is very serious. The external manifestation of the crisis came with the discovery of the Brandix factory cluster in early October. There appears to have been many failures in regard to its control. Religious clerics have appeared on media to say that this is the nature of things. Following the latest lockdown, president Gotabaya Rajapaksa made an appeal to the general population to be more responsible in their attitudes. However, the laxity appears to have been contributed to by the state authorities and their agents responsible for the implementation of the COVID-19 control system.

There is an increasing public sentiment that the government as a whole was resting too much on the laurels that president Gotabaya Rajapaksa had earned for safeguarding the country from COVID-19 up to now. Indeed, this was one of the general election campaign slogans, where national television depicted the plight of COVID-19 patients in other more developed countries, and contrasted them to Sri Lanka’s situation. The president was the recipient of much credit for having decisively ensured that the country should go in for prolonged lockdown for nearly three months in order to ensure security and safety from COVID-19 infection. For many months it appeared that COVID-19 infections from within the country had come down to virtually zero with only foreign returnees adding to the numbers of those infected.

Indeed, the situation in the country appeared to be COVID-19-free to the extent that election rallies were conducted without conforming to COVID-19 guidelines imposed by the health authorities. Regrettably the impression was created, that most of the people readily accepted, that the government had conquered COVID-19. The confidence that the country was COVID-19-free was demonstrated with the holding of the International Book Fair in Colombo in September. Going by the experience of previous years, it could have been anticipated that there would be tens of thousands of book lovers coming from all parts of the country. This was in fact the reality. There was a compulsory requirement for those who entered the book fair to be wearing masks. However, due to the large crowds that gathered there was no space for social distancing to be practised.

EVEN in that time of apparent safety, references to the need for more testing were made drawing on international experience from those countries that had been more successful in controlling the infection. In July, former prime minister Ranil Wickremesinghe said, Sri Lanka should be prepared to face a possible second wave of COVID-19 pandemic without delay. He said, ‘There was an opportunity to bring in a new legislation to control COVID-19. We, in the UNP made several proposals in this regard. We called for the increase of testing. This was ignored.’ In addition, he warned ‘It is everyone’s duty to prevent a second wave. UK is greatly affected by COVID-19. It is questionable whether the UK could get out of this crisis. How could Sri Lanka get out of it if a country like the UK is unable to get out of it?’

One of Sri Lanka’s top experts in health policy Dr Ravi Rannan Eliya who was prophetic six months ago in warning of what was to come has offered a three step programme to minimise the harm that COVID-19 spread can bring. First, he say, the government needs to impose a two week lockdown island-wide, having given everyone 48 hours to prepare. This is because such a lockdown would prevent clusters from being seeded in new areas. Second, it needs to scale up PCR testing capacity to around 50,000 tests a day. Third, in the longer term, everyone with any respiratory symptoms or fever, even a runny nose or scratchy throat, should be encouraged to get tested. ‘And to avoid terrifying them of the consequences, we will need to find an alternative that allows most cases to be isolated and managed at home. The experience of countries that follow this approach is that this strategy with high levels of testing can prevent large outbreaks ever occurring and can allow us to return to normal life without masks or lockdowns.’

The suicide of a physically disabled child whose mother was taken away for COVID-19 quarantine that was reported in the media highlights the importance of a culture of care, in addition to efficiency, that needs to be promoted. In this case, even the neighbours had appealed to the Public Health Inspectors to take her child along with the mother instead of leaving him by himself. There are reports of those who happened to be physically present at the Peliyagoda fish market when the COVID-19 cluster was discovered, were taken without a moment’s notice, and without the possibility of even taking their medications for other ailments. In one such case, top level connections had to be utilised to get heart and high blood pressure tablets across to a person with heart disease taken away to be quarantined. The treatment of COVID-19 patients as if they were dangerous criminals who need to be locked away without considering their humanitarian needs has been a critical downside of the present government approach.

THE resurgent COVID-19 threat provides an opportunity for the government to reconsider its methodology and work in a more inclusive manner and instead trying to work by itself and by bringing the military to the fore even in areas of civilian governance. The debacle of the security failure during the period of the previous government led by former prime minister Wickremesinghe, and in which opposition leader Premadasa was an important member, may have discredited them. It has also induced Sri Lankan society to opt for a more centralised and top-down approach to solving national problems as manifested in the 20th Amendment that was approved by a 2/3 majority in parliament including those from the opposition. It appears that even civilian administrators are being influenced by the top-down approach of the military which is to follow orders to the letter without reasoning why.

There is no greater fear that families have that they will be dislocated and parents have that they may be suddenly dragged away to quarantine and their children left to fend for themselves as that physically disabled child was. Finding the best answer to such humanitarian issues was not a task that the government should have taken on by itself but in consultation with other sections of society. Any responsible opposition party would wish to collaborate with the government to ensure that the country recovers from the pandemic. In SJB leader Sajith Premadasa, the government can be assured that it has a leader of the opposition who will work cooperatively rather than to trip it up. A few days after the Brandix cluster was discovered he made what would have been a politically unpopular appeal for a lockdown of the Gampaha district which, if it had been heeded, may have halted the spread of the virus countrywide.

As this is a national crisis it would be better if the government made its decisions on a more inclusive basis bringing in the opposition and institutions such as the GMOA to widen the discussion about possible alternatives and to dispel doubts about the real situation. There is now signs of change which is very positive. It is to the government’s credit that it is revising its policy on quarantine and testing in particular. President Rajapaksa has in a meeting with the COVID-19 prevention task force taken salutary decisions. The government has decided to self-quarantine the infected at their homes instead of taking them to quarantine centres. In order to make it more effective the president said that the process should be continuously monitored by the Medical Officer of Health, the Public Health Inspector, the police and the army. The president had emphasised the importance of conducting continuous and regular random tests. As stated by the president the government was able to protect the people during the first outbreak even when there was no experience on COVID-19 and it can control the current situation utilising the lessons learnt from previously adopted strategies and methods.