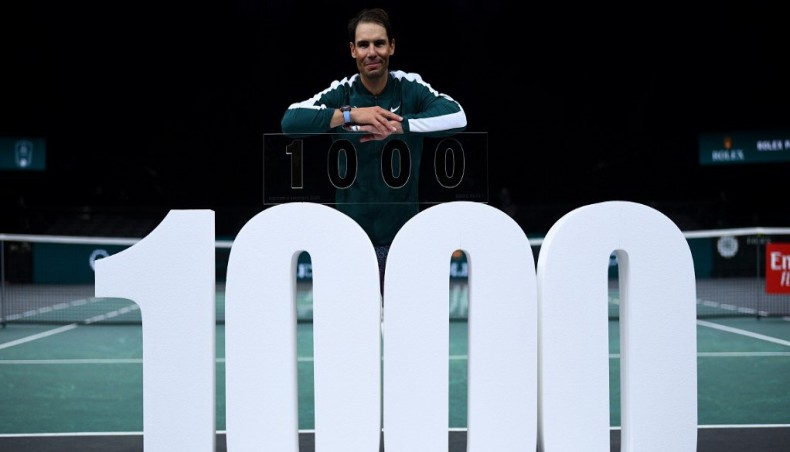 Spain's Rafael Nadal celebrates as he receives the trophy of his one thousandth victory of the ATP at the end of his men's singles second round tennis match against Spain's Feliciano Lopez in Paris on Wednesday. — AFP photo

Rafael Nadal said he was proud of a ‘great achievement’ after securing the 1,000th Tour-level victory of his illustrious career on Wednesday, becoming the fourth man to reach that mark with a comeback win over Feliciano Lopez in the Paris Masters second round.

‘I am proud about a lot of things, but I faced some challenges in my career in terms of body injuries,’ said Nadal.

Nadal, whose first match win on the ATP Tour came in April 2002 when he was just 15, is fourth on the all-time list, with Jimmy Connors leading the way on 1,274 victories, 32 more than second-placed Roger Federer.

‘One negative thing about getting to 1,000 -- is that you’re very old as it means you have to have had a very long career,’ added Nadal.

Nadal was given a special presentation to celebrate his achievement after the match in a near-empty Bercy Arena, with the event being played behind closed doors after France entered its second coronavirus lockdown last week.

The 34-year-old Nadal, bidding for a first Paris Masters title, will face Jordan Thompson in the third round.

He struggled to find his rhythm for much of the match as 39-year-old Lopez served excellently, saving the first six break points he faced, but Nadal stepped it up in the second-set tie-break.

The top seed grabbed the crucial break in the first game of the decider and then eased to victory after saving two break points himself in the next game.