3cr doses of Oxford-AstraZeneca drug to arrive from Jan 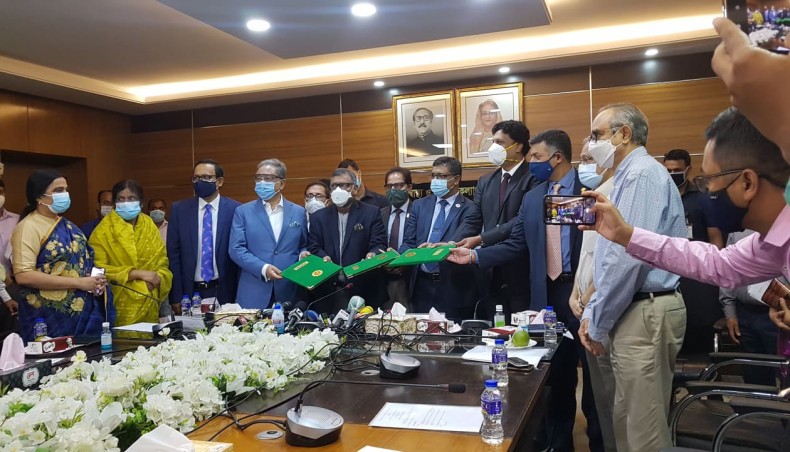 The health ministry on Thursday signs a tripartite contract with the Serum Institute of India and Beximco Pharmaceuticals for importing three crore doses of COVID-19 vaccine, developed by Oxford-AstraZeneca. - New Age photo

The three crore doses would be used, on a priority basis, to vaccinate 1.5 crore frontline workers like health workers, police, journalists, and ailing people as well, health minister Zahid Maleque said at the post-agreement signing press briefing at his office.

‘The Oxford-AstraZeneca COVID-19 vaccine will be imported after it gets approval from the World Health Organisation,’ he said, adding that Serum Institute would export 50 lakh doses to Bangladesh per month.

Each person will be required to take two doses of the vaccine, he said.

According to the contract, the government will pay $5 for each of the doses to Serum Institute, including $4 as price and $1 for carrying it maintaining the required temperature.

Serum Institute will pay its local agent Beximco Pharma for carrying the vaccines from the former’s warehouse to the Bangladesh government’s warehouse, according to the tripartite deal.

Serum Institute, one of the world’s largest manufacturers of vaccines, is producing one billion doses of the Oxford-AstraZeneca vaccine, an adenovirus vector-based vaccine.

The COVID-19 vaccine is currently undergoing large-scale phase-III trials in  Brazil, US, UK and India and is expected to receive approval by the end of 2020.

Beximco Pharma in late August signed a contract with Serum Institute as its local agent for importing and distributing the vaccine in Bangladesh, the company claimed.

Narrating the government efforts to contain the COVID-19 outbreak from its beginning in March, health minister Zahid Maleque at the briefing said, ‘Today we have moved one step forward to fight the COVID-19 virus.’

‘We have not yet decided the price of each dose of the vaccine but it will be sold at a highly subsidised rate,’ he said, adding that Serum was selling the vaccine to Bangladesh at the same rate at which it was selling it to the Indian government.

Zahid disclosed that the government would get more vaccines from Serum through the Bill and Melinda Gates Foundation and Gavi, the Vaccine Alliance at subsidised rates to vaccinate 20 per cent of the total population along with 98 developing countries of the world.

‘But we don’t know when we will get those,’ he said, adding that private companies like Beximco might import vaccines from Serum but they would have to operate vaccination programmes through hospitals or clinics.

Zahid said that the government would continue to explore more sources for obtaining COVID-19 vaccines in order to cover the country’s total population.

Meanwhile, he said, people must strictly follow the health guidelines to keep the situation under control.

Health secretary Mannan said that the government continued negotiation with six companies of Russia, China, India and the USA that were conducting the third-stage trial of their vaccines.

Indian high commissioner Doraiswami said, ‘Today our partnership and cooperation moved one step forward. The health or epidemiology security of India cannot be ensured without the health safety of Bangladesh and it’s vice versa.’

He also said that India was helping Bangladesh in training programmes for combating the COVID-19 outbreak. ‘We are also working as partners in various other sectors,’ he said.

Beximco Pharma managing director Nazmul Hassan said that the company worked as a mediator between the government and Serum Institute for importing the vaccine.

‘We considered the manufacturing of the Oxford-AstraZeneca COVID-19 vaccine by Serum Institute as the best option for its potential, proven safety and the suitability for our weather,’ said Nazmul.

The vaccines, he said, being developed by Moderna and Pfizer would need to be preserved under minus 17 degrees Celsius.

Nazmul further claimed that Beximco was distributing Remdesivir for free for the treatment of the COVID-19 patients at the government hospitals.

Beximco Pharma’s chief operating officer Rabbur Reza, who signed the agreement on behalf of the company, told New Age that Beximco took government permission separately to import 10 lakh doses of the vaccine from Serum Institute and would sell each dose at $8 in the local market.

‘We will import more vaccine if we see that there is more demand,’ he said, adding that the vaccine manufacturing by Serum Institute would not require trial in Bangladesh if it got the WHO approval.

Health ministry officials said that the government suspended negotiations with China’s Sinovac Biotech Limited after the company demanded money for conducting a trail of the vaccine in Bangladesh.

They said that the government, in negotiating with the Russian Direct Investment Fund, also set the holding of local trail as a condition in case of importing the Russian COVID-19 vaccine named Sputnik V.

No vaccine would be imported to Bangladesh unless the WHO gives approval to that, they added.