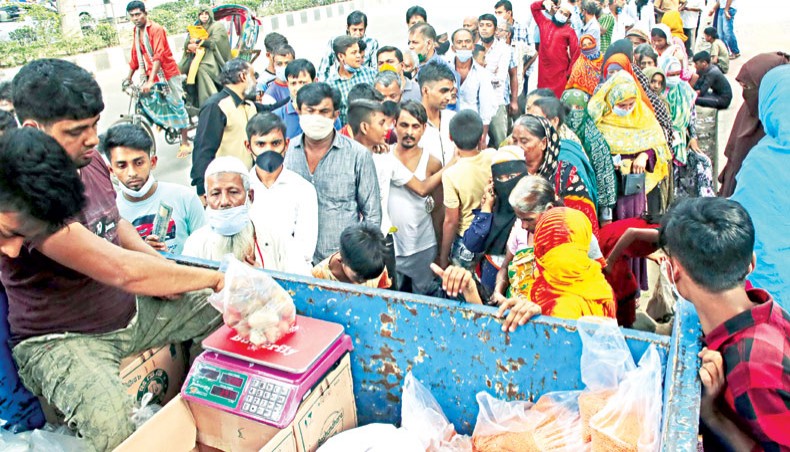 People in a long queue buy commodities from an OMS truck of TCB on Abdul Gani Road beside Secretariat in Dhaka on Wednesday. — Sony Ramany

The point-to-point inflation skyrocketed to 6.44 per cent in October, the highest in six years, due to sharp rise in prices of essential commodities.

Soaring inflation in recent months has put additional burden on low- and middle-income people who have been suffering from severe income and job loss since the beginning of the COVID-19 outbreak, experts and economists said.

The previous highest point-to-point inflation was 6.60 per cent in October 2014.

The general inflation increased by 47 basis points to 6.44 per cent in October from that of 5.97 per cent in September, according to Bangladesh Bureau of Statistics data.

Food inflation also rose by 0.84 percentage points to 7.34 per cent, which is also a 33-month high, in October than 6.50 per cent a month ago, the data released on Wednesday showed.

Prices of most of the vegetables, potato, pulse and meat continued to surge in October while prices of rice, onion and some other essential products remained high in the market and many items remained out of affordability of the majority of people.

Soaring inflation in recent months is putting additional burden on low- and middle-income people suffering from severe income and job loss amid the COVID-19 outbreak, experts and economists said.

Many limited income people reduced the amount of their food intake to cope with the price spiral of food items, they said.

The bite of inflation may continue for few more months, they added.

According to various  study reports, households up to 80 per cent experienced a significant reduction in income amid the virus outbreak.

The Citizen’s Platform for SDGs, Bangladesh in a survey, released on November 1, found that almost 80 per cent of households in the country faced income reduction during the period.

Earlier on October 1, BRAC University in association with the University of California released a survey report saying that 77 per cent of the readymade garment factory workers in Bangladesh found it difficult to feed everyone in their household because of job loss or wage cut amid the outbreak.

Public and private research organisations, including Bangladesh Institute of Development Studies and the Centre for Policy Dialogue, in their studies also found reduction of income, loss of jobs, salary cut, increase in poverty rate and reducing food intake involving a large portion of the population.

According to the BBS data, the previous highest food inflation rate was 7.62 per cent in January 2018.

Rural people are the most affected by the inflation as overall inflation and food inflation stood at 6.67 per cent and 7.73 per cent respectively in October in rural areas from that of 5.96 per cent and 6.61 per cent in September.

Centre for Policy Dialogue distinguished fellow Mustafizur Rahman said that the inflation rate reached its highest level mainly due to price hike of many of the food items following supply chain disruption, loss of food items due to excessive rain and floods.

The government also failed to take strategic decisions on import of the items and check the middleman›s role in price hike, he said.

The situation has hit the lower-income groups hard as they have been suffering from reduction of purchasing power since the onset of the outbreak, he said.

The government should strengthen its market monitoring mechanism, ensure enforcement of consumer rights law and focus on increasing the capacity of scientific forecast on supply, demand, stock and import of essential items, he added.

Policy Research Institute executive director Ahsan H Mansur said that soaring inflation was worsening the impact of the COVID-19 outbreak on people who had already been in a dire situation due to loss of income and jobs since the beginning of the health crisis.

The government should take steps to boost supply of essential products, mainly rice, potato and onion, by ensuring import, he added.