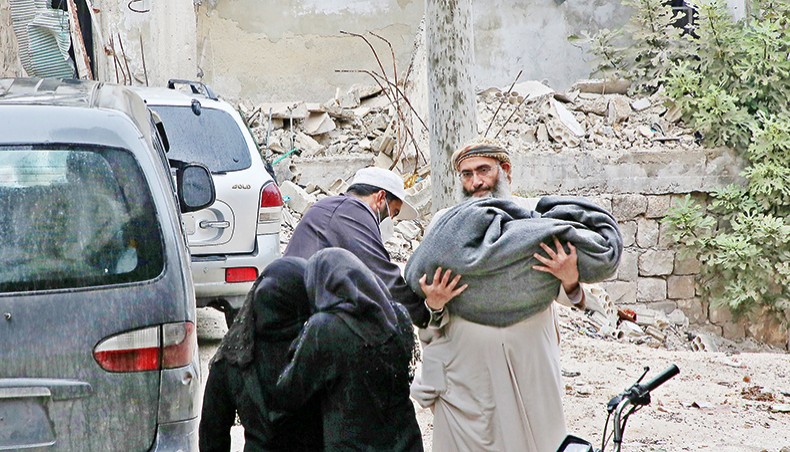 A Syrian man carries the body of a child killed in early morning shelling on the town of Ariha by government forces in the rebel-held area in northwestern Syria early on Wednesday. — AFP photo

The deadliest salvoes hit the town of Ariha, the Britain-based Syrian Observatory for Human Rights said, adding that 20 civilians were also wounded across the rebel-held northwestern region of Idlib.

‘The regime launched sustained artillery and rocket fire in the morning on several parts of Idlib, killing seven civilians, including four children,’ the monitoring group said.

Rebel groups dominated by the jihadist Hayat Tahrir al-Sham alliance have been steadily losing ground to Russian-backed government forces since they launched an offensive to retake Idlib almost a year ago.

A truce reached in March has largely halted the bloodshed in the rebel enclave, which is home to some three million people, although there have been sporadic flare-ups.

An air strike attributed to Russia killed around 80 pro-Turkish rebel fighters in a training camp in the region last week, a sign of growing tension between the two main foreign players Moscow and Ankara.

According to the Observatory, more than 3,80,000 people have been killed in the conflict that erupted in 2011 after the brutal repression of anti-government protests.