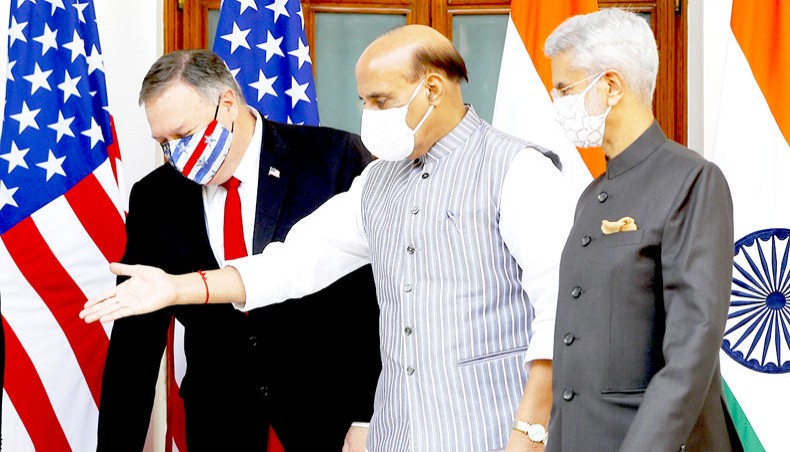 The third US-Indian meeting was held in the ‘2+2’ format, in October 26–27 in Delhi, which involved the ministers and secretaries responsible for foreign affairs and defence from both countries. The meeting before the last one, which was held in September 2018, was a milestone for both nations in the process of fostering US-Indian relations.

It is worth emphasizing again that the very existence of this kind of format represents a fairly reliable sign that there is a high level of trust in the relations between its participants in this sort of bilateral configuration. One reservation should be made – this affirmation does not always hold true (for example, with the ‘Russian-Japan’ tandem), but is fully applicable to the ‘US-India’ combination.

In this case, its reliability is determined by one key issue in modern world politics, which boils down to the transformation of China into a global power. Something which is perceived by Delhi and Washington as a source of threats to their ‘national interests’. This perception itself is scarcely explainable from viewpoints that are more or less rational. However, unfortunately ‘rationalism’ does not prevail in modern-day world politics. It must be said that it is not even clear when it was present in it at all.

Be that as it may, the ‘Chinese’ factor is turning out to be the main de facto motive for both the American-Indian rapprochement as a whole and for the meeting discussed in the ‘2+2’ format. In the view of its participants, that has been especially clearly manifested recently by the exacerbation of the situation in one of the mountainous areas along the Sino-Indian (quasi) border, as well as in the area around Taiwan and in the South China Sea.

The ‘Chinese threat’ is the main driving force behind attempts to form an ‘Asian NATO’ of four members (a Quad) up to this point, including the United States and India. One noteworthy event on the path to creating that was the second meeting between foreign ministers from participating countries that was held on October 6 in Tokyo. The Quad project also cast a thick shadow over the last US-India 2+2 meeting.

The most significant in the series of documents signed about that was the Basic Exchange and Cooperation Agreement, whose conceptual content is tough to reflect in Russian in words that more or less close approach a literal translation. The first point is that now the parties will exchange information in the field of military high technologies in a mode that will prevent unauthorized leakage to ‘third’ countries. In addition, the military will exchange high-resolution spatial maps. India believes that having these maps will improve the accuracy of hitting targets using missiles in various classes.

BECA is the latest of four so-called ‘fundamental’ agreements that are invariably present in the field of defence in America’s relations with its closest allies. After signing this document, this means that India is effectively among them.

The agreement before this one that is similar to it (Communications Compatibility and Security Agreement, or COMCASA), and will provide India with access to modern communication network security systems, and allow it to optimally make use of existing US military equipment, was one of the main results following the meeting before the last one held in the ‘2+2’ format.

Two years earlier (in August 2016), during negotiations held in Washington by then-secretary of defence A Carter and minister of defence M Parrikar, the second of these ‘fundamental’ documents was signed, specifically the Logistics Exchange Memorandum of Agreement, which provides for mutual logistics support for combat troop units between the countries participating in this agreement.

The very first of the above-mentioned documents (the General Security of Military Information Agreement, or GSMIA), which has a fairly general framework for its objectives in the system of bilateral military cooperation, was signed back in 2002. In fact, its appearance was the first evidence of Washington practically implementing a course to improve relations with India, which were fairly tense during the Cold War years (and in the first decade after it was over).

This course itself was outlined in March 2000 during president Clinton’s visit to Delhi. At first, the process of developing American-Indian relations proceeded rather cautiously, due to the general uncertainty surrounding the consequences of China’s transformation into a new global power, which had been charted out even back then. However, by the middle of the next decade, this issue had apparently become sufficiently clear both for Washington and Delhi. The results of this was that the process of rapprochement started to pick up its pace.

Taking advantage of one of the vivid images painted by AP Chekhov, it can be stated that the history leading up to signing these ‘fundamental’ US-Indian agreements is a ‘living chronology’ of a long period of development in the relations between them.

As far as the ‘2+2’ meeting under discussion goes, both in its ‘full-format’ and ‘binary’ versions, a wide range of issues was discussed that touched upon various aspects of the situation in the Indo-Pacific region.

In particular, the subject of Afghanistan was broached, as was the situation characterized by heightened uncertainty after the well-known agreement between the United States and the Taliban was signed. This is evidenced by the large-scale terrorist attacks carried out recently in Kabul by groups that are doubtfully controlled by the Taliban’s leadership. The uncertainty of the situation is also attested to by how the negotiation process in Doha is backsliding between representatives from the government in Kabul and the Taliban.

Since the intention to leave Afghanistan on the part of Washington was outlined a long time ago (even during the first presidency of Barack Obama), Washington has been looking for the most suitable candidate to ‘take over its post’ in this extremely important country for just as long a time. By the middle of the second decade as well, India began to be considered as one, which was perceived with understanding by the ‘official’ government in Kabul.

However, even while expanding its presence in this country’s economy, until recently Delhi was not that enthusiastic about the prospect of including a military component in that. All the more so since India does not actually share a border with Afghanistan. During the last US-Indian meeting in the ‘2+2’ format, the two sides scarcely stepped outside the bounds of a very general framework for discussing the Afghan problem. Moreover, there were no representatives from the PRC, Pakistan, or Iran at the negotiating table, meaning those countries without whose direct participation it hardly makes any sense to examine this issue in greater detail.

Judging by the comments in Indian media outlets, they also discussed the topic of the Quad. It is worth noting that Washington is expressing its intention quite clearly not to restrict the makeup of this project to its four current participants. In this regard, comments were also made on the last overseas tour made by M Pompeo, only part of which was holding the next meeting in the ‘2+2’ format in Delhi. After that, the US secretary of state went to Sri Lanka, the republic of the Maldives, and Indonesia. There is a long-standing struggle between Beijing and Washington for influence in these countries, and others in the region, which Delhi joined a while ago.

The reason for the latest American-Chinese round of bickering was specifically the second part of M Pompeo’s tour. During the press conference held by two of his deputies for Indo-Pacific affairs on the eve of their boss’s departure, negative rejoinders resounded directed toward Beijing’s politics in the region.

On October 26, the Chinese embassy in Sri Lanka issued a statement condemning the anti-Chinese diatribe by American officials. n particular, that stating how fairly transparent proposals were put forth to leadership in Sri Lanka to abandon Beijing’s ‘financially nontransparent’ projects, which are being implemented in this country within the framework of the general concept of the Belt and Road Initiative, in favour of ‘transparent’ western projects.

Naturally, China could not stand by without making any comments on the latest overseas tour made by its (almost quintessential) personal ill-wisher. Particularly close attention was paid to the main, ‘Indian’ part of this trip. Along with that, no specific grievances were targeted against M Pompeo personally, from whom Beijing apparently does not expect anything good.

Questions were directed primarily towards China’s colossal neighbour, which is suspected of planning to ‘go under US patronage’. This, according to the author of this image from the Chinese Global Times, will not help India in any way in its current border conflict with China.

In conclusion, it can be said that the results of the latest American-Indian meeting in ‘2+2’ format, and the entire last overseas tour of US secretary of state M Pompeo, fit into the general context of ratcheting up the tension in the Indo-Pacific region.

New Eastern Outlook, November 4. Vladimir Terekhov is an expert on issues of the Asia-Pacific region.