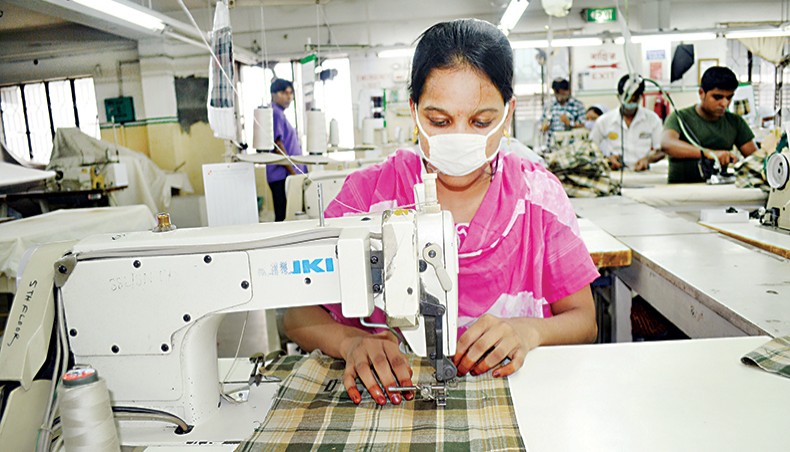 A file photo shows readymade garment workers sewing clothes at a factory on the outskirts of Dhaka. The country’s export earnings declined by 4.08 per cent to $2.95 billion in October in the current fiscal year 2020-2021 compared with that of $3.07 billion in the same month of FY 2019-2020 due mainly to negative growth in readymade garment export. — New Age photo

RMG export recorded a negative growth of 7.78 per cent in October.

Exporters said that the situation was a warning about faltering recovery in global demand and trade for the sector.

The overall export earnings, however, grew by 0.97 per cent to $12.84 billion in July-October of FY21 from $12.72 billion in the same period of FY20, according to the Export Promotion Bureau data released on Monday.

The government set the strategic export target worth $12.8 billion for the period while the target for the entire fiscal year was set at $41 billion.

Though knitwear export posted a 4.76-per cent growth in July-October, woven export declined by 7.76 per cent in the period.

Earnings from woven garments in July-October of FY21 fell to $4.65 billion from $5.04 billion in the same period of last fiscal year.

On the other hand, knitwear export in the four months of this fiscal year increased to $5.80 billion from $5.54 billion in the last fiscal year.

Bangladesh Garment Manufacturers and Exporters Association president Rubana Huq on Monday told New Age that after having a historic decline in export growth in FY20 by 18.12 per cent and a trail of declining growth in seven consecutive months, the performance of the sector edged up to the positive territory in August and September.

But negative growth in October warns about faltering recovery in global demand and trade, she said.

‘The decline in export growth in the period is quite alarming as the decline is predominantly caused by the fall in woven garments export,’ she said, adding that knitwear export grew because of stable demand for casual wear for home use.

Though the country-wise export data was not available yet for the month of October, the July-September data showed that export to non-traditional markets suffered the most while export to the European Union and the United States maintained stable growth which actually helped the country get a turnaround in export, she said.

‘Now since Europe has entered into a fresh wave of COVID infection, emergencies and lockdowns are being declared in many countries including France, Germany, Belgium and Greece, and more are feared to follow the trail, it would be difficult for us to cope up if EU’s demand for clothing and its sourcing is troubled further,’ she observed.

In October, the price of garment declined on average by 4.15 per cent and the price growth in July-October was negative 3.45 per cent year-on-year.

‘The decline in prices at this point of time is killing us as the COVID-19 caused a severe financial damage to our factories, the industry is running at a lower capacity on average by maintaining health protocol which has certain costs,’ Rubana said.

Export earnings from leather and leather goods in July-October of FY21 fell by 10.63 per cent to $283.2 million from $316.9 million in the same period of last fiscal year.

Export earnings from chemical products in the period grew by 16.59 per cent riding on a 19.83-per cent growth in pharmaceuticals products’ export.