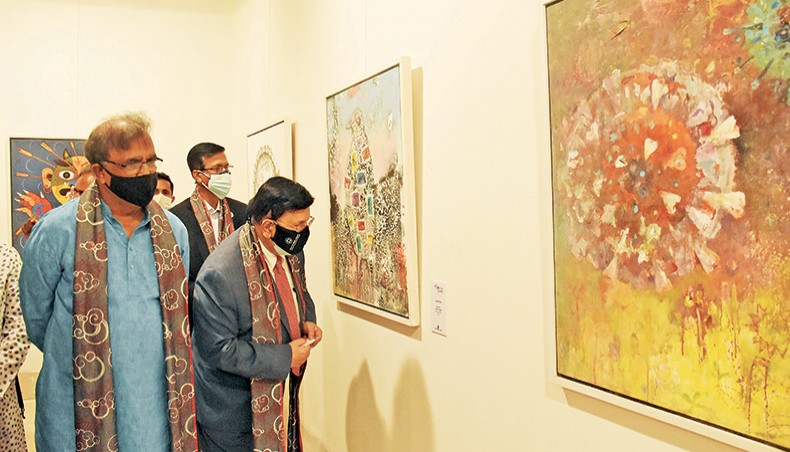 A group art exhibition, titled Art Against Corona, portraying the COVID-19 outbreak and its impact on society, nature, people and animals is under way at Gallery 1 and Gallery 2 of the National Art Gallery of Bangladesh Shilpakala Academy.

The month-long show, organised by Bangladesh Shilpakala Academy, features a total of 235 artworks by 235 young and renowned artists. The majority of the displayed works have been done in acrylic. Besides, the event features oil, mixed media works and installations.

The paintings are an outcome of an art camp held in July at BSA under its special art camp programme. The academy provided the participating artists with the necessary materials. Each artist received an honorarium which ranged from TK 5,000 to TK 8,000 and TK 10,000 according to the BSA rankings.

‘We have proved that we are a heroic nation. Not a single person has died from starvation amid the crisis. Everyone worked together for the welfare of the motherland. The exhibition is indeed a praiseworthy initiative in the time of COVID-19 as many artists have been going through a tough time,’ said AK Abdul Momen.

The artworks speak to the issue of how the new COVID-19 outbreak has changed both present and future, affecting the very fabric of our life. They also take into account how animal and bird population were also affected, besides human relationship and social-economic realities. The crisis of the marginalised also became a focal point for many. However, monsoon rain, scenic beauty alongside concerns over hygiene practices also served as themes.

Country’s leading female painter Kanak Chanpa Chakma’s acrylic work shows an ethnic woman working in a hilly area wearing a yellow sari while she has a mask on.

A royal Bengal tiger painted on a stamp also wears a mask in an unusual acrylic work created by Purnia Mrittika, which is titled ‘Bangladesh O Corona’. The work emulates a stamp and it even bears the value, which is stated as 20, and the name of the country — Bangladesh, alongside the word COVID-19. At the bottom of the work a slogan appears urging people to save animals by way of maintaining hygiene.

The exhibition will remain open till November 26.