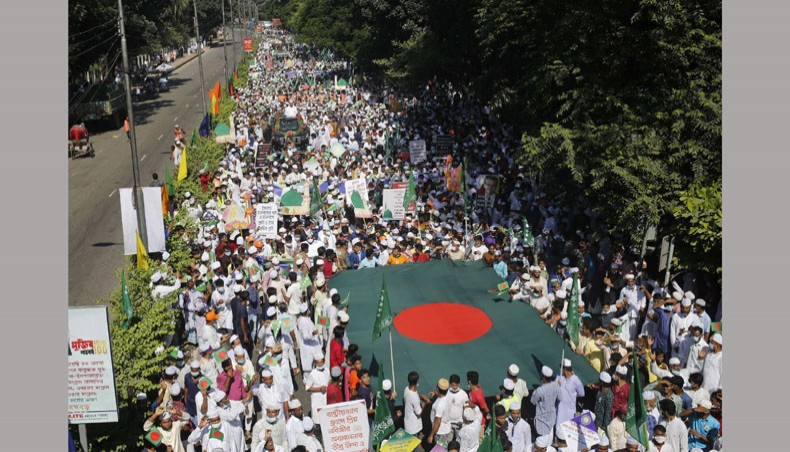 Holy Eid-e-Miladunnabi, marking the anniversary of birth and death of Prophet Muhammad, was observed in the country on Friday with religious festivity and fervor.

Many members of different spiritual and social organizations joined several isolated street marches in the capital and elsewhere in the country chanting praise of the prophet for his role for the mankind.

On this day in 570, the 12th of Rabiul Awal of the Hijri calendar, Hazrat Muhammad was born in Makkah, Saudi Arabia with divine blessings and messages of peace for mankind.

Different government and non-government organisations, including the Islamic Foundation chalked out elaborate programmes to mark the day.

President M Abdul Hamid and prime minister Sheikh Hasina have greeted the countrymen and the Muslims across the world on the occasion of holy Eid-e-Miladunnabi, the birth anniversary of Prophet Hazrat Muhammad.

In separate messages on the eve of the day, they underscored the need for following the ideals of the prophet for peace and prosperity.

Meanwhile, on the occasion of holy Eid-e-Miladunnabi, special supplements were published in various national dailies in collaboration with the Islamic Foundation.

Meanwhile, IF undertook various programmes on the occasion of Eid-e-Miladunnabi and all programmes were  held maintaining proper health rules.

The programme of IF was inaugurated at the eastern ‘Sahan’ of Baitul Mukarram National Mosque after Maghrib on Thursday.

Besides, on the occasion of the day, all the departments, districts, upazilas and government and non-government organisations also held special programmes including discussion, meetings and mahfils on the biography of Prophet Hazrat Muhammad.