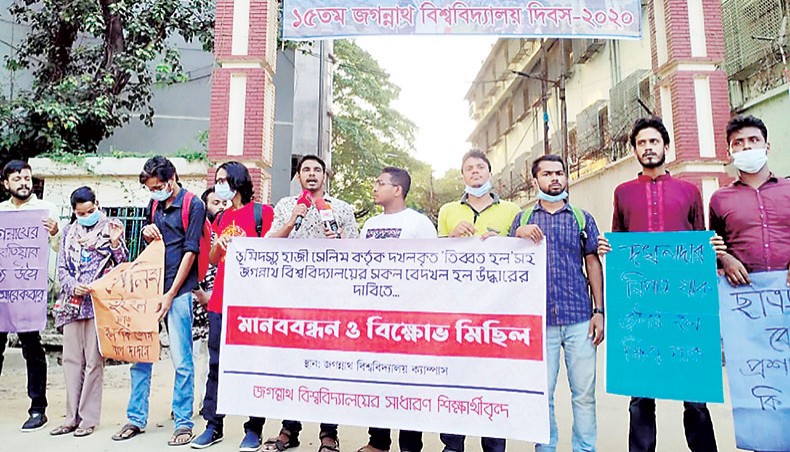 Jagannath University students form a human chain in front of the campus in Old Dhaka on Thursday demanding eviction of the grabbers from several establishments of the university. — New Age photo

Students of Jagannath University demanded the recovery of their residential Tibet Hall from the clutches of Dhaka-7 Awami League lawmaker Haji Mohammad Salim, who built a multi-storey market on the land of the hall opposite Ahsan Manjil.

The students staged a protest rally and formed a human chain in front of the university campus on Thursday afternoon demanding immediate repossession of the land to resolve their accommodation crisis.

For over a decade, there have been class boycotts, exam cancellations, cases and counter cases filed in the local police station, and even irruption of violence on the streets, but the accommodation problem is yet to be addressed, said JnU students attending the human chain under the banner of Bangladesh Sadharan Chhatra Odhikar Parishad.

The land grabbing by the lawmaker came under the spotlight recently after his son Irfan Salim, councillor of Dhaka South City Corporation ward No 30, was arrested on Monday for  assaulting a navy officer.

Navy Lieutenant Wasif Ahmed Khan on Monday filed the case against Irfan and his associates for assaulting him at the Kalabagan crossing on Sunday as the officer complained after Salim’s car hit the officer’s motorbike.

The case was shifted to the detective branch of police.

DB investigators said that Irfan admitted to the assault on navy officer and narrated his experience in jail after being sent by a Rapid Action Battalion mobile court on Monday night for one and a half years in jail.

After Irfan’s arrest, the RAB found a ‘torture’ cell on the top floor of Haji Salim-owned 16-storey Medina Ashik Tower, which is few yards away from the nine-storey home of the lawmaker in Chawkbazar.

Irfan and Zahidul were prosecuted by the RAB in four more arms and narcotics cases.

The process of grabbing the land of their dormitories started back in 1985 during the regime of late Hussain Muhammad Ershad.

In Old Dhaka, between February 6 and 10, people in different parts of the town launched a series of systematic attacks on the 12 halls of the then Jagannath College and drove out the students.

Later, Haji Salim grabbed the land at an opportune moment and built a multi-storey market on the land of the Tibet Hall.

Mahmudul Hasan told New Age that in the next few days they would be waiting to see initiatives by the university authorities. If the authorities remain reluctant, the students will lay siege to the administrative building, he added.

The university register Wahiduzzaman told New Age that they would ask the government to recover their land grabbed by Haji Salim and others.

‘We will take the land if the government recovers it on our behalf,’ he added.

The students of JnU previously demonstrated in 2016 and 2014 making the same demand.

In 2014, students demonstrating in front of Tibet Hall were beaten up by associates of Haji Salim.

Some locals in Chawkbazar, Moulovibazar, Imamganj, Begumbazar and other parts of Old Dhaka said that Haji Salim and his associates were always on the lookout for disputed lands and gabbed those in name of arbitration.

Nur Jahan Begum, a residence of Paschim Islambagh, complained that Haji Salim had tried to grab his house in 2016 in name of arbitration and even threated to kill her son Abdul Kader, a Juba League leader, for campaigning in favour of Mostofa Jalal Mohiuddin, Awami League candidate in 2014 general election.

The woman had written a complaint to the prime minister against Haji Salim in 2016.

Locals said that Haji Salim and his associates would persuade owners to sell their shares of the disputed properties at a minimum price and then would have the other owners picked up by his musclemen and armed cadres and torture them until they agreed to sell their shares.

Some locals in the Chawkbazar area on Thursday alleged that the Salim family was controlling the area through some organisations run by their associates.

These were youth and traders’ organisations where chief patrons were either Haji Salim or his son Irfan Salim.