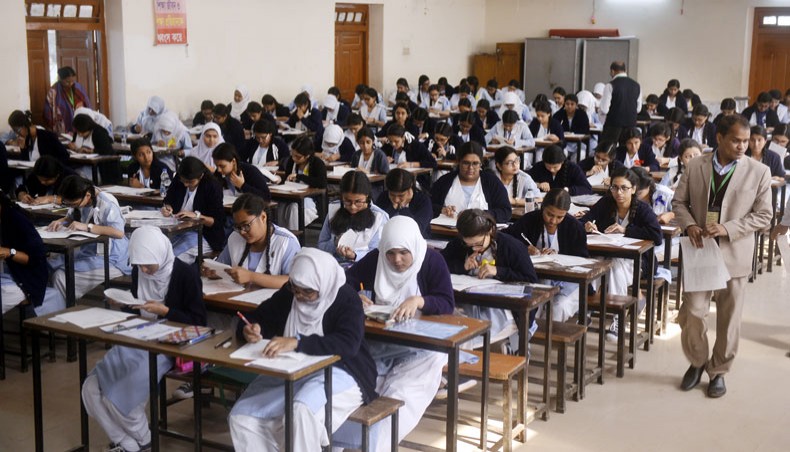 Primary school students and teachers said that they were in uncertainty whether or not their annual examinations would be conducted amid COVID-19 as the primary education ministry did not clarify its position on the issue.

The confusion among primary students, their parents and teachers increased after the ministry on Thursday passed fresh instructions to the National Academy of Primary Education and the Directorate of Primary Education to prepare a fresh 30-day syllabus for the primary school children and chalk out a reopening plan after November 14 to bring Class-5 students to schools for assessment.

An estimated 2.38 crore children are studying at the 65,620 government primary schools and over 60,000 non-government schools and kindergartens in the country.

‘We are completely in the dark whether the annual exams at the primary schools will be held or not,’ said Md Anisur Rahman, president of Bangladesh Primary Assistant Teachers Union.

‘It’s not clear to us what the ministry meant by repeatedly saying that the schools would assess the children for the promotion to next classes,’ he added.

Bangladesh Kindergarten Schools and Colleges Oikya Parishad chairman Iqbal Bahar Chowdhury said that various instructions from top officials of the education ministry and the primary education ministry have created confusions among the teachers, students and their parents amid the COVID-19 outbreak.

Alia Khanam, parent of a Class-4 student at South Point School in the capital, said that her son got the annual exam syllabus from the school but the schedule was not mentioned in the instruction.

‘We, however, saw news that the education minister on Thursday said that they had plans to reopen institutions on a limited scale only for Class X and Class XII,’ she said, adding that everything was confusing.

State minister for primary education Md Zakir Hossain in his briefing said that the schools would set their own methods of assessing students for their promotion to the next classes.

After the briefing, primary education secretary Md Akram Al Hossain told New Age that he passed a fresh instruction to the NAPE director general to develop a short syllabus on the core learning for the students in 30 days hoping to reopen schools after November 14.

‘The Directorate of Primary Education was instructed to prepare a reopening plan at least to bring Class-5 students to schools maintaining the health guidelines,’ he added.

Education minister Dipu Moni on October 20 said that there would be no annual exams for the students from Class XI to Class XI but assignments would be given to assess their learning they achieved from remote classes broadcasted on the Sangsad TV channel and online classes.

On Thursday, Dipu Moni, however, said that the ministry would consider possibilities of reopening regular classes for Class-X and Class-XII students after November 14 to enable them to prepare for the upcoming Secondary School Certificate and Higher Secondary Certificate exams.

Other classes of the schools, colleges, madrassahs and universities will remain closed but online classes and administrative activities of the intuitions would continue, she said.

Since March 17 the classroom activities of the educational intuitions in the country have remained closed for the COVIDE-19 outbreak.

The government has not yet taken a decision regarding the tests at the schools required for appearing at the SSC exam.

The SSC and HSC candidates would be in trouble if they cannot take required preparations due to the closure of educational intuitions, she said.

‘But, there must be some assessment for selecting candidates to take SSC and HSC exams in 2021,’ Dipu Moni said.

Parents were also complaining that a kind of apathy was developing among the students because of the closure of the institutions for seven months, she said.

‘At the same time, we will have to consider the COVID-19 situation, which has deteriorated across the globe while the health experts have predicted that the situation may worsen in the country in the upcoming winter,’ she said.

By November 14, Dipu Moni said, a decision for reopening classes for Class X and Class XII would be finalised.

She said that the government was yet to decide when the final-year exams of the graduate and under-graduate programmes of the public universities would be held.

‘Such examinations cannot be compared with the HSC exams as the future careers of the university students depend on the results of these exams,’ Dipu Moni added.

The minister also requested the universities to consider the health issues before deciding on holding admission tests.

She disclosed that the ministry received the inquiry report prepared by the University Grants Commission on the said corruption of the Rajshahi University vice-chancellor.

‘We will take a decision in this regard soon,’ she said.