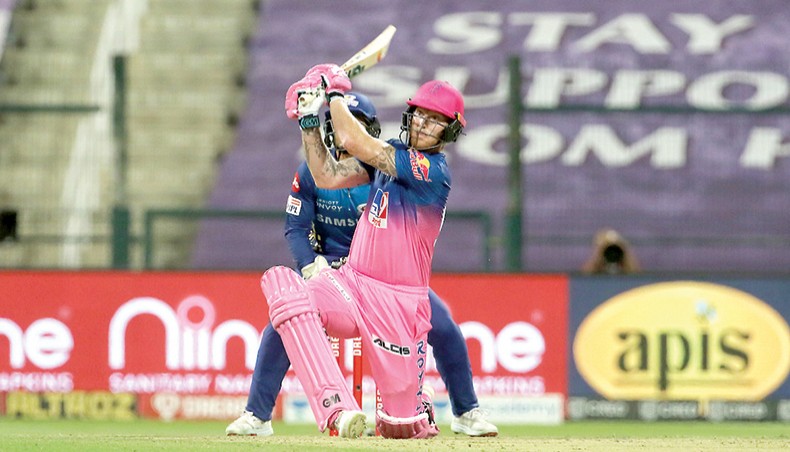 England allrounder Ben Stokes has dedicated his biggest Indian Premier League innings to his father, who is battling cancer in New Zealand.

Stokes smashed an unbeaten 107 off just 60 balls to help Rajasthan Royals beat holders Mumbai Indians by eight wickets on Sunday, keeping the inaugural IPL champions in the hunt for one of the four playoff places.

Stokes raised his bat and hand with a folded finger after the hundred as a gesture to his ailing father whose middle finger was amputated because of injuries while playing and coaching rugby league.

‘Things are a bit difficult right now, but hope this has given a bit of happiness back home,’ said an emotional Stokes after recording his highest IPL score with 14 fours and three sixes.

Stokes joined the Royals late in the United Arab Emirates after spending time with Ged Stokes, who has been diagnosed with brain cancer, in New Zealand.

New Zealand-born Stokes, who had pulled out of the England-Pakistan Test series in August, had scored just 110 runs in his five previous matches this season. His previous IPL best was 103 in 2017.

Stokes put on a brilliant 152 third-wicket stand with Sanju Samson as Royals passed the 196 target with 10 balls to spare.

The win in Abu Dhabi leaves the Steve Smith-led Royals sixth in the IPL table with 10 points from 12 games.

England teammate Jofra Archer, who returned figures of 2-31, also made a mark on the match with a stunning, leaping one-handed catch on the third-man boundary to dismiss Mumbai batsman Ishan Kishan off paceman Kartik Tyagi.