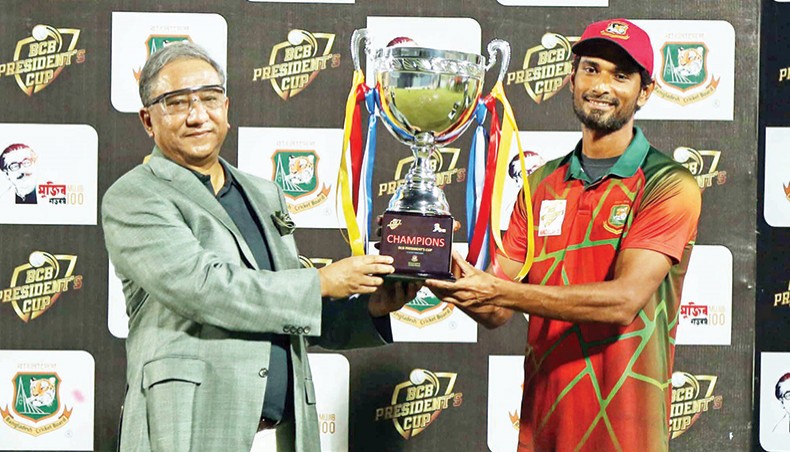 Bangladesh Cricket Board will not allow foreign cricketers in the upcoming Corporate Twenty20 tournament, which is scheduled to commence from November 15, said BCB president Nazmul Hasan.

After the prize giving ceremony of the BCB President’s Cup on Sunday, Nazmul spoke to the media about the board’s next step in their roadmap to restart cricket in Bangladesh, which had been dormant before the triangular one-day tournament.

The BCB president said that the board will now move ahead with their plan of staging a five-team Twenty20 tournament and said that only local cricketers will partake in the competition.

‘We would like to organise a Twenty20 tournament. First we had a three-team tournament [BCB President’s Cup], now we will increase the number to five,’ Nazmul said.

‘So far, we have decided not to involve foreign players as we are increasing the teams hopefully some more local cricketers will get the opportunity to play,’ he added.

The BCB president also said that Shakib Al Hasan, whose one year sanction from the ICC will end on Thursday, will return to Bangladesh by November 10 to take part in the forthcoming Twenty20 tournament.

BCB, however, is still undecided about some issues of the tournament like team selection and team ownership but Nazmul hoped to sort them out soon.

‘The teams will have sponsors. Some parties have already shown interest. Most of them are new entrants, who couldn’t get involved with BPL due to financial constraints. We will issue EOI for the teams within the next few days.

‘We would prefer to select the teams ourselves. But if the team owners want to select the player’s through the draft then that can happen too. But I don’t think in this pandemic situation anybody will want to do so. We can also go for a lottery,’ said the BCB President.

Besides ending the long sabbatical for local players, the BCB president thinks that hosting local tournaments under bio-bubble protocol will help the cricketers better prepare for their eventual return to international cricket in the ‘new normal’.

‘The players had to work very hard. They were not allowed to leave their floor of the hotel. If they have to play any series outside the country, the situation will remain pretty much the same. So adapting to the situation was also very important,’ Nazmul said.

Nazmul also informed that BCB is planning to announce a handsome amount as prize money for the Twenty20 tournament, just like the recently concluded BCB President’s Cup.

The cricket board also wanted to televise the entire tournament and will call for tenders soon, said Nazmul.

Recently, some media reports suggested that ICC is thinking about splitting the points of the postponed ICC World Test Championship matches.

A number of Bangladesh’s ICC Test Championship matches against Pakistan, Australia, New Zealand and Sri Lanka were deferred due to the pandemic and this decision could end Bangladesh’s drought points drought in the competition but Nazmul said nothing was finalised yet.

‘This decision is yet to be finalised by the board. It was one of the options. Let the proposals come to the ICC board meeting first, and then we will see.’