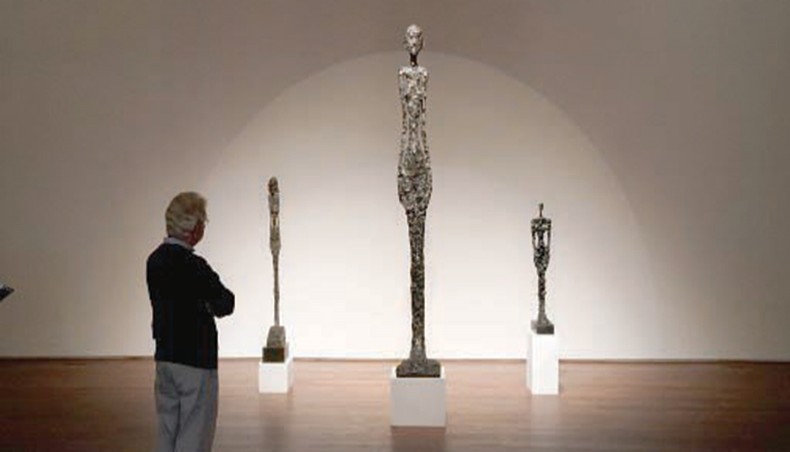 In this file photo a person looks at Alberto Giacometti’s ‘Grande femme I’ during a press preview at Sotheby’s October 23, 2020. — AFP photo

A sculpture by Swiss artist Alberto Giacometti is being auctioned by Sotheby’s with a reserve price of $90 million but the winning offer on Tuesday could remain secret as it is being sold by sealed bid.

If ‘Grande femme I’ sells for more than $100 million, Giacometti will equal Pablo Picasso as only the second artist with four works beyond that threshold.

The nearly nine-foot (2.68 meter) bronze of a spindly female figure, cast in 1960, is part of a series of large outdoor sculptures originally intended for Chase Manhattan Plaza in New York but never installed.

Under the rules of the hybrid auction, interested buyers can make only one secret bid of at least $90 million.

The auction closes at 1600 GMT Tuesday and the work will go to the highest bid, if it is at least five percent higher than the second highest, otherwise a second round will take place.

Unlike a traditional auction, Sotheby’s will not reveal the purchase price, although the buyer can if they wish.

Since 2010, three works by the Swiss artist, known for his elongated, emaciated figures, have already sold for more than $100 million, the only sculptures to have reached this level.

‘This work is really the apotheosis of his exploration of the female standing figure over the course of his lifetime,’ she said.

‘It’s mesmerizing. It places us in the artwork. How you encounter it and how it makes you feel is so much part of the work and his intention.’

Throughout his career, the sculptor gradually enlarged the size of his works up to the monumental ‘Grande femme I’ towards the end of his life.

‘The Grande femme is intended to be vast, enormous and dwarfing to a regular human,’ said Lampley, to stimulate ‘reflection and an introspection about your place in the world.’

The star of the autumn sales at Sotheby’s, the ‘Grande femme’ will be followed on Wednesday by a sale of contemporary art and a second of Impressionist works and modern art.