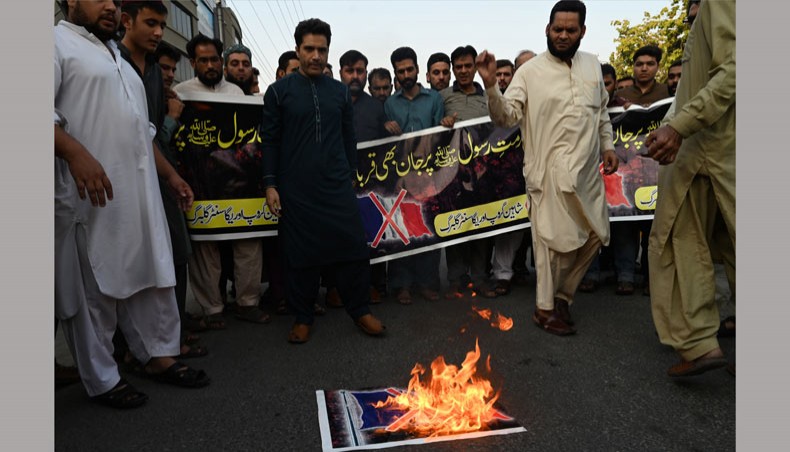 Pakistan summoned France’s ambassador on Monday to complain about a ‘systematic Islamophobic campaign’ in the European nation after French president Emmanuel Macron criticised Islamists and defended the publication of religious cartoons.

The move came as small, scattered protests were held in cities across Pakistan and a day after prime minister Imran Khan accused Macron of ‘attacking Islam’.

Foreign affairs ministry spokesperson Zahid Hafeez Chaudhri told AFP the French ambassador had been summoned ‘to convey Pakistan’s concerns over the systematic Islamophobic campaign under the garb of freedom of expression’.

The French embassy in Islamabad did not immediately comment.

Macron spoke out last week after a Chechen extremist beheaded a French teacher near Paris after he had shown cartoons of the Prophet Mohammed (SM) during a class he was leading on free speech.

Macron said the teacher ‘was killed because Islamists want our future’.

That comment compounded earlier controversy after the French PM this month said ‘Islam is a religion that is in crisis all over the world’.

The teacher became the target of an online hate campaign over his choice of lesson material—the same images that sparked a bloody assault by Islamist gunmen on the offices of satirical magazine Charlie Hebdo, the original publisher, in January 2015.

Caricatures of Mohammed (SM) are forbidden by Islam and blasphemy is an explosive issue in ultra-conservative Pakistan, where anyone deemed to have insulted Islam or Islamic figures can face the death penalty.

A few dozen people rallied in Pakistani cities Monday including in Quetta and Peshawar, where protesters demanded a boycott of French goods and religious leaders called for larger demonstrations on Friday.

Last month, a Pakistan-born man admitted stabbing two people outside Charlie Hebdo’s former Paris offices. According to investigators, he had wanted to avenge the magazine’s republication of the cartoons.

Khan, a populist leader who has been known to play to Pakistan’s hardline religious base, wrote to Facebook CEO Mark Zuckerberg on Sunday asking the social media giant to take down Islamophobic content.

A Facebook representative said in a statement the company was against ‘all forms of hate including hate targeting the Muslim community’.