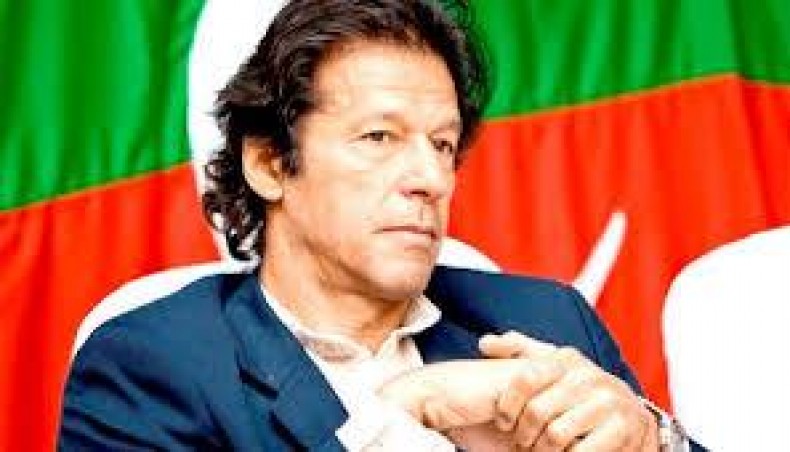 Imran’s comments followed statements Macron made last week after a French teacher was beheaded near Paris after he had shown cartoons of the prophet during a class he was leading on free speech.

Macron said that the teacher ‘was killed because Islamists want our future.’

In a series of tweets, Imran said that the remark would sow division.

‘This is a time when Pres Macron could have put healing touch & denied space to extremists rather than creating further polarisation & marginalisation that inevitably leads to radicalisation,’ Imran wrote.

‘It is unfortunate that he has chosen to encourage Islamophobia by attacking Islam rather than the terrorists who carry out violence, be it Muslims, White Supremacists or Nazi ideologists,’ he added.

Macron already sparked controversy earlier this month when he said that ‘Islam is a religion that is in crisis all over the world’.

The French teacher became the target of an online hate campaign over his choice of lesson material – the same images that sparked a bloody assault by Islamist gunmen on the offices of satirical magazine Charlie Hebdo, the original publisher, in January 2015.

Caricatures of Prophet Muhammad (SM) were forbidden by Islam.

Blasphemy was an explosive issue in ultra-conservative Pakistan, where anyone deemed to have insulted Islam or Islamic figures could face the death penalty.

‘By attacking Islam, clearly without having any understanding of it, president Macron has attacked & hurt the sentiments of millions of Muslims in Europe & across the world,’ Imran Khan wrote.

In an address to the United Nations last month, Imran, a populist leader who had been known to play to Pakistan’s hard-line religious base, blasted Charlie Hebdo for re-publishing the cartoons, saying ‘wilful provocations’ should be ‘universally outlawed’.

‘Given the rampant abuse and vilification of Muslims on social media platforms, I would ask you to place a similar ban on Islamophobia and hate against Islam for Facebook that you have put in place for the Holocaust,’ Imran Khan wrote.