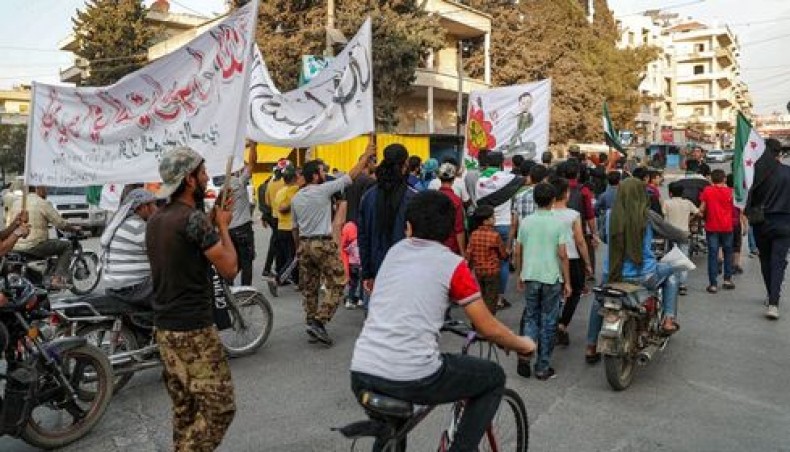 People chant slogans as they march with signs and banners during a rally protesting against the comments of French president Emmanuel Macron over Prophet Mohammed cartoons, in Syria’s rebel-held north-western city of Idlib on October 25, 2020. — AFP photo

France urged Arab countries to stop calls for boycotts of French products while president Emmanual Macron vowed the country would never give in to Islamic radicals.

Comments made recently by Macron about Islamic extremists and his reaction to the October 16 murder of a French teacher by a teenaged Chechen extremist had sparked tension with several Arab countries and populations.

On September 2, Macron had already presented a draft law to combat ‘Islamist separatism’ in France, an issue that was being widely discussed in the country.

Calls for boycotts of French goods had since come from groups in Jordan, Kuwait, and Qatar, in particular after Macron vowed not to ‘give up cartoons’ that depict the prophet.

On Sunday, Macron said in a tweet: ‘We will not give in, ever’ to Islamic radicals.

‘We do not accept hate speech and defend reasonable debate,’ the French leader added.

His comments came as the French foreign ministry urged countries where boycott calls had been made to stop them and ensure the security of French citizens.

‘Calls for a boycott are groundless and must cease immediately, as must all attacks on our country that have been manipulated by a radical minority,’ a ministry statement said.

It underscored the danger posed by ‘calls to demonstrate against France, in terms that are sometimes heinous and spread on social media.’

The ministry insisted that France’s position was ‘in favour of the freedom of conscience, of expression and of religion, and a rejection of all calls that incite hatred.’

Macron added in comments on Twitter that France ‘cherished’ freedom, ‘guaranteed’ equality, and experienced fraternity ‘intensely’ in a reference to the nation’s credo.

‘Our history is one of fighting tyranny and fanaticism. We will continue,’ he said.