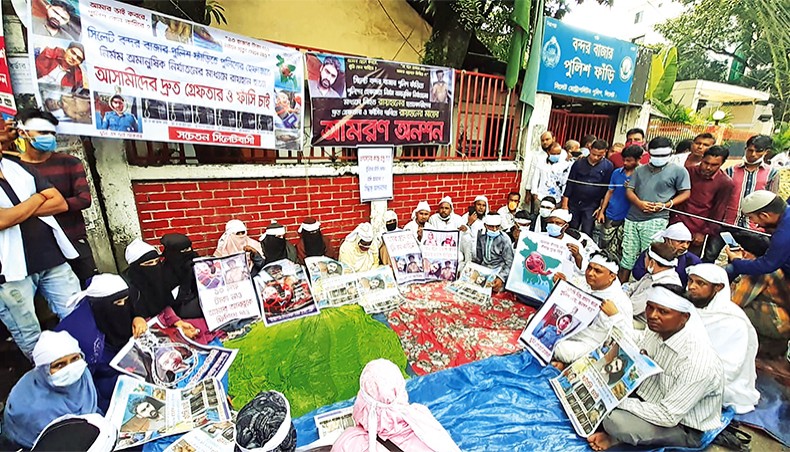 The family members of deceased Raihan Ahmed of Sylhet are on a hunger strike in front of the Bandarbazar police post on Sunday, which they ended in the afternoon after Sylhet mayor assured them of arresting the accused. — New Age photo

The Police Bureau of Investigation on Sunday arrested another man for his suspected involvement in torturing Raihan Ahmed in police custody to death on October 11.

The arrested was identified as Saidur Rahman who had earlier alleged that Raihan snatched his money in Kastaghar area in the city in the early hours of October 11, the police said.

Meanwhile, victim’s mother Salma Begum, who had begun a hunger strike in front of the Bandar Bazar police outpost at around 11:00am on the day to press home the demand for bringing all suspects, including police sub-inspector Akbar, to justice without delay, withdrew her strike at about 4:45pm upon city mayor’s assurance that her demand would be placed before the government.

‘Following a request, Saidur came to our office of Shahjalal Upashahar in the city at about 11:00am and later he was arrested under section 54 for his statements during the interrogation,’ the PBI inspector said, adding that Saidur was produced before the metropolitan magistrate court in the afternoon and the court gave an order to send him to jail.

Saidur had reportedly informed the police at about 3:00am on October 11 that Raihan had snatched away his money in the Kastaghar area.

Later, the police had taken Raihan to Bandar Bazar outpost of Kotwali police station and allegedly tortured him to death.

Responding to a question, the IO said that Titu Chandra Das, a constable of the police outpost, was put on a fresh 3-day remand in police custody for further interrogation.

He said that they produced Titu before the court of additional chief metropolitan magistrate Ziadur Rahman in the afternoon after his remand for 5 days ended.

‘We sought a 3-day remand to quiz him again in police custody and the court granted the prayer,’ the PBI officer said.

The PBI had arrested Titu at Sylhet police lines on October 20 and put him on a 5-day remand in police custody in the custodial death.

Of them, Akbar managed to flee his workplace immediately after the issuance of the suspension order and remained absconded till Sunday, the PBI said.

The SMP also suspended sub-inspector Hasan Uddin in charge of assisting Akbar, also prime suspect in the custodial death, to flee the outpost and concealing information in this connection.

A Sylhet court on Saturday also granted a 5-day remand to quiz constable Harunur in police custody in the incident of torturing Raihan to death.

Harunur was arrested on Friday night at Sylhet police lines for his involvement in torturing Raihan, 34, compounder of a doctor chamber at Stadium Market, to death at the Bandar Bazar outpost, the PBI said.

Bandar Bazar outpost in-charge Akbar had claimed that Raihan, son of late Rafiqul Islam of Neharipara at Akhalia area in the city, died after he was beaten by a mob at Kastaghar in the city in the early morning of October 11 while he was trying to snatch money from a pedestrian.

But Raihan’s family alleged later that he was tortured to death by the police after they failed to realise Tk 10,000 from him as bribe.

His widow Tahmina Akter Tanni also filed a case in this regard with the Kotwali police on October 12.

Meanwhile, three constables Delwar Hossain, Saiful Islam and Shamim, who were on duty at the Bandar Bazar outpost when Raihan was tortured, gave their testimonies as witnesses to the court under section 164 of the code of criminal procedure on October 19.

Raihan’s mother Salma Begum blamed police negligence for the delay in arresting the suspects, including Akbar, in the case of custodial death.

She said that she would continue with the hunger strike until all suspects involved in the killing of her son are arrested.

At one stage during the hunger strike, traders of different markets in the Bandar Bazar area joined in, showing their solidarity with the victim’s family and his relatives and pressed for the same demands and later staged a demonstration blocking the Surma Market-Court Point road.

Later, Sylhet City Corporation mayor Ariful Haque Chowdhury reached the spot and persuaded Raihan’s family members and relatives to withdraw the hunger strike at about 4:45pm after assuring them of sending a request to the foreign minister, planning minister and the administration concerned for immediate arrest of the accused.