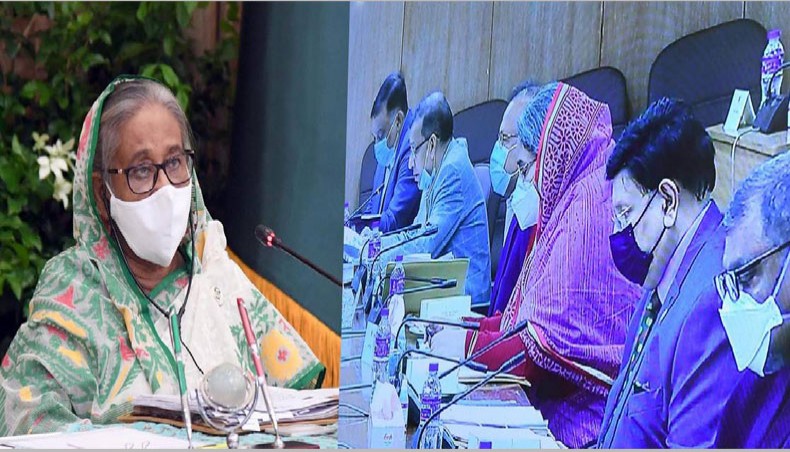 The government has decided to enforce a ‘no mask no service’ policy at both government and private offices from now on in a bid to check further spread of COVID-19 infection by ensuring mandatory use of masks.

‘Agencies concerned have been asked to follow the “no mask and no service” policy to ensure the execution of the government instruction for a mandatory use of masks,’ cabinet secretary Khandker Anwarul Islam told a press briefing after the weekly cabinet meeting on Sunday.

He said that anyone seeking any service at offices without wearing a mask would not be entertained from now on. Even, market authorities will also be asked to ensure the policy, he added.

Anwarul said that everyone must wear a mask in any public gathering at markets, offices, mosques and other religious and educational institutions as it was feared that a second wave of the coronavirus outbreak might hit the country in the winter from next month.

The health ministry apprised the cabinet meeting of its initiatives to tackle the COVID-19 situation.

Prime minister Sheikh Hasina chaired the virtual cabinet meeting from her Ganabhaban residence while her cabinet colleagues joined it from the Secretariat.

The cabinet also endorsed a proposal to replace the ordinance promulgated by the president on October 13 making death the highest punishment for rape with the Women and Children Repression (Amendment) Bill 2020, to be placed in the Jatiya Sangsad on November 8.

The ordinance was promulgated as parliament was not in session.

‘The bill replacing the ordinance that amended the Women and Children Repression Act 2000 incorporating death for rape would be placed in parliament on the first day of the next special session on the occasion of Mujib Barsha without changing any provision,’ the cabinet secretary said.

The cabinet also approved the draft of the updated speech of president Md Abdul Hamid for the special session of the 11th Parliament, initially prepared for March 22, marking the birth centenary of the country’s founding president Sheikh Mujibur Rahman.

The president in his speech before the House would highlight the life and work of Sheikh Mujibur Rahman, the government’s measures to tackle the COVID-19 prevalence and some other achievements in the last few years under the leadership of prime minister  Sheikh Hasina, daughter of Sheikh Mujib, according to the cabinet secretary.

Anwarul said that it was pointed out in the meeting that many people were found without masks in public places, including markets, mosques and public transports, amid the risk of coronavirus infection.

He said that the public announcement systems of mosques would be utilised to create awareness of the importance of using masks.

In the previous cabinet meeting on October 19, the prime minister asked the agencies concerned to ensure mandatory use of masks to prevent COVID-19 infection as experts feared that the country might face a second wave of the coronavirus infections in the upcoming winter.

The government enforced a countrywide shutdown restricting public movement and closing offices and businesses from March 26 to May 30 to contain the coronavirus spread following its detection on March 8.

COVID-19 infections claimed the lives of 5,803 people and the number of total coronavirus cases rose to 3,98,815 in the country till Sunday, according to the Directorate General of Health Services.