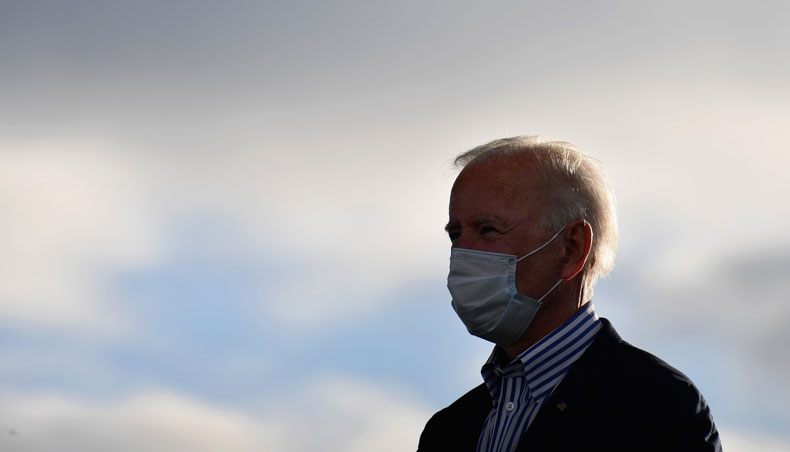 Wary that polls showing Donald Trump behind could again be wrong, New Yorkers turned out massively on Saturday to vote early as they hope to ensure a ‘really big win’ for Joe Biden.

A long line stretched along 34th Street and then onto Seventh Avenue in Trump’s strongly Democratic hometown on Saturday, the first day for early voting in New York, as people calmly waited to enter a specially organised polling station in the cavernous confines of Madison Square Garden arena.

With the normal schedule of concerts and sporting events cancelled by the coronavirus pandemic, NBA players were able to persuade authorities — following a series of enormous racial-justice demonstrations — to transform several huge sporting arenas into polling stations.

In this once hard-hit city that had so far managed to fend off a resurgence of COVID-19, voters — all in masks — seemed ready to wait for hours if need be before passing through the metal detectors leading to the voting booths.

Local media reported long lines in front of more than 80 voting sites on Saturday, as New Yorkers flocked to cast ballots even as polls predicted Trump would lose the election – as they did in 2016 when he snagged a surprise win over Hillary Clinton.

‘There’s been so much going on it’s just, it’s a privilege to be waiting in a line like this,’ Jerad Ashby, 38, a Biden supporter, told AFP, adding, ‘I think we just have to exercise our rights, and I’m excited to be here.’

Kenneth Scarlett, who works in marketing, said, ‘The country needs to know, regardless whether you are in a blue state or a red state, where all its citizens stand,’

‘I want Trump to be repudiated in the strongest possible way,’ he added.

Lisa, a 50-something finance worker who declined to give her last name, said that she, too, was willing to spend hours on the sidewalk to exercise her right to vote.

‘In 2016, too many people were complacent and didn’t come out to vote and the wrong outcome happened,’ she said, adding, ‘This time we can’t let that happen.’

In the past she had always considered herself an independent-minded centrist, sometimes voting Republican, sometimes Democratic.

‘‘Republican’ didn’t used to be a bad thing...it’s just recently become quite evil. So I will vote Democratic right down the column,’ she added.

If she had to pay higher taxes under a Democratic president, she said, so be it, adding, ‘I would choose expensive over evil.’

New York police had been preparing for weeks for the possibility that demonstrations could degenerate into violence.

Even for early voting, police had been deployed to Madison Square Garden as well as the 80 other voting stations open in the city from now through November 1.

And city authorities had announced they were recruiting an Election Observer Corps to avoid any ‘intimidation’ of voters.

No pro-Trump militants or agitators were in evidence on Saturday outside Madison Square Garden.

Instead it was a small group of leftist activists, there to ‘encourage’ voters that was turned aside by police, who asked them to keep their distance – and not to shout ‘Dump Trump!’ as one of them did.

Franco-American actor Timothee Chalamet, 24, said that after voting that ‘we’re in a democratic crisis in the United States. We have to vote.’

‘I’m here because I’m trying to take part like everybody else in saving this democracy. There are two people on the ballot: one person supports democracy, one person doesn’t,’ he added, making clear that for him Biden was the one who does.

But what if the New York billionaire was re-elected, even after being rejected by his hometown?

For 65-year-old retiree Laura Gillis, it would be the proof that a US system that allowed a candidate receiving a minority of the popular vote to still become president — as Trump did in 2016 — ‘has to change.’

But to Kenneth Scarlett, a Trump victory would not be the end, ‘Instead, we work harder for the next time – you don’t despair, you find out why and you work harder to get more citizens to see what you saw.’