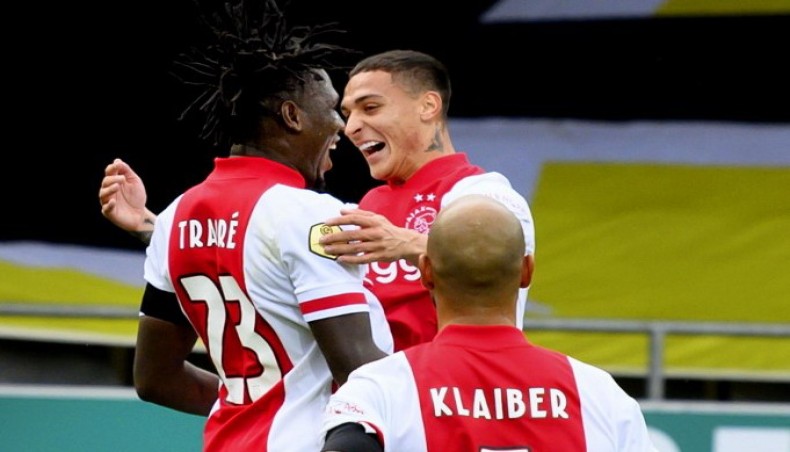 Ajax forward Lassina Traore (L) celebrates one of his five goals against VVV Venlo during their Eredivisie match at the Covebo stadium De Koel in Venlo on Saturday. — AFP photo

Ajax broke their own 48-year Eredivisie record on Saturday when they hammered Venlo 13-0 in the biggest ever win in the history of the division.

Lassina Traore struck five times as the defending champions outdid Johan Cruyff's Ajax, whose 12-1 win over Vitesse Arnhem had stood as the top flight's record win since May 1972 -- the season the Amsterdam club won the league title and the second of their four European Cups.

Traore became the first Ajax player to score five goals in an Eredivisie game since Marco van Basten in 1985 as his team racked up more goals in this match than they had in their five other league matches.

The 19-year-old's goals were his first of the league campaign and put him one behind Feyenoord's Steven Berghuis who tops the scoring charts, and he also set up three for his teammates.

Afterwards, Traore said Ajax's midweek 1-0 loss to Liverpool in the Champions League ‘made us angry’ and hungry to atone against Venlo.

‘We have respect for them, but once on the field we gave everything and became even angrier,’ he told public broadcaster NOS.

Ajax coach Erik Ten Hag agreed: ‘You don't see this type of result in the Eredivisie. It's very special.

‘We were hungry in the field. We wanted to score goals -- and I'm fine with that.’

The huge win puts Ten Hag's Ajax top of the division, two points ahead of PSV Eindhoven and three in front of third-placed Vitesse. Those two face off at Sunday lunchtime.

Feyenoord and Twente, who lost 2-1 to Utrecht on Saturday, are four points back.

Venlo are in mid-table on five points with a goal difference of -13 after conceding more than half of all the goals scored against them this season in just one match.

They have not won since the opening day of the season.

‘All we can do is pick up the pieces tomorrow,’ Venlo coach Hans de Koning told reporters.

‘This is a game we want to bury deep underground and pour concrete over.’

Traore had the easiest of tap-ins to make it 3-0 in the 32nd minute, and Dusan Tadic ended the match as a contest a minute before the break when he span on the edge of the area and forced a low shot home.

Venlo centre back Christian Kum was handed a straight red card six minutes after the break with his team four goals down, and soon after the floodgates opened.

Antony laid on a headed goal for Traore that was an almost carbon copy of his first in the 65th minute and substitute Klaas-Jan Huntelaar scored the 10th from the spot with 16 minutes remaining before tapping home his second two minutes later.

It ony took another two minutes for demoralised Venlo to concede a 12th, Lisandro Martinez strolling forward and curling home a smooth finish. Traore completed the destruction with three minutes remaining when he lashed home his fifth on the counter.